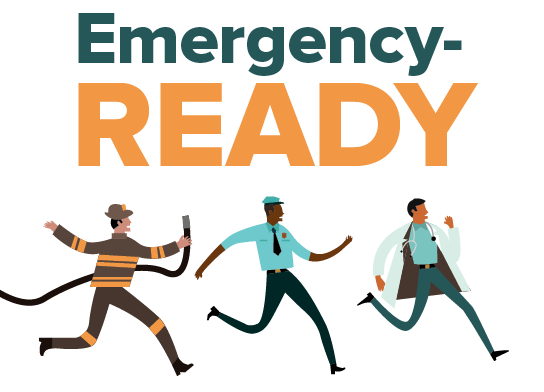 America has had its share of mass disasters, but so far we have been able to rely on our local governments to mobilize and protect us. In recent years, steps have been taken to further prepare cities and regions to come together to make the most of available resources and be self-sufficient until the arrival of state and federal support, if and when needed or requested.

“There’s a lot happening to keep citizens safe that most don’t know about,” says Manuel Cruz, director of Homeland Security & Criminal Justice for the Lower Rio Grande Valley Development Council. He explains how protocols like a Metropolitan Medical Response System prepare for and protect us in the face of acts of terrorism like 9/11, forces of nature like Hurricane Katrina, or any other unexpected threat to our local communities.

The MMRS program was originally founded by the Department of Health and Human Services in 1996 in response to terrorist activity, and established 27 systems in cities like Washington, D.C., and Atlanta. Since 2003, it has come to be operated by the U.S. Department of Homeland Security and established over 125 systems across the United States, including four regional ones like the Rio Grande Valley region’s current system.

The Lower Rio Grande Valley Development Council, in developing a regional MMRS, has responsibility for initial planning efforts in order for first responders to responses collectively to any mass destructive event on the U.S. side of the border for an area covering 4,874 square miles.

“I identify the Metropolitan Medical Response System as the medical component of Homeland Security,” Cruz says. “It is a framework that follows the Homeland Security priorities and supports our local first responders and other emergency personnel should our region face a mass catastrophe.” The regional MMRS enhances city-wide response efforts, and establishes lines of communication to handle mass patient care, mass prophylaxis, and integrated biological preparedness, among other situations. The Rio Grande Region is also hurricane-prone, so that is a factor in the regional MMRS as well.

“National Incident Management Systems, in relation to Incident Command Systems, are well established in every state,” Cruz says. “First responders have a level of training that allows them to know their roles far in advance instead of waiting for instruction the day of a given disaster.”

A regional MMRS expands on this system by offering training for emergency first responders to ensure a cooperative regional response.

“When training is made available, we open it up to the whole region and try our best to coordinate with everyone,” he says. “Though hospitals are private entities that have other primary duties and responsibilities, we do get participation. We receive complete cooperation from our first-responders at the local, state and federal level, such as, the Weslaco Fire Department, Texas Department of Public Safety and U.S. Customs and Border protection.” 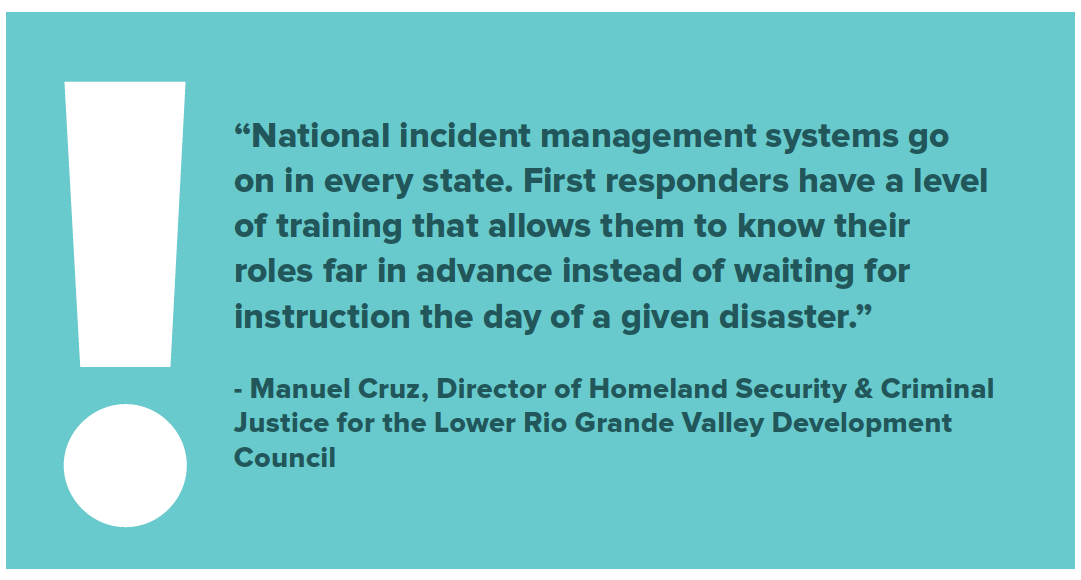 Should a disaster start at a local level, Cruz says, you would have an overwhelming response from the community. “It would start from the city level, and depending on the scenario or event, that would drive the response.” If it’s a very large event, the city may need more resources and that will trigger a mutual aid request and response from neighboring jurisdictions. From there would follow requests to other surrounding cities, then to the county, then to the tri-county area. If all resources were exhausted, then the Lower Rio Grande Valley Development Council would coordinate with the state.

However, the goal of the MMRS is to make the region as prepared as possible before an event to minimize the damage and our reliance on outside help.

“One of our objectives at the council is to provide assistance for planning and studies within the region that would lead to funding streams for necessary projects that would address any level of response and vulnerabilities,” Cruz says. “We stand our ground and fight for every cent that we receive and put it to good use.”

The MMRS identifies gaps within the four-county area that deal with emergency response and establishes a mechanism to alleviate these gaps. The LRGVDC secured funds to develop a Mass Fatality Plan after finding no such plan at the region level.

“Regionalism works at our level, and the first responder community in our region is tremendous,” Cruz says.

From hurricane or terrorism to alien invasion, the Metropolitan Medical Response System supports existing systems during the early hours critical to life saving and population protection.

“At every event, you see an array of badges out there from the different municipalities,” Cruz says. “It’s a close community all here to do one thing — keep our citizens safe.”

The LRGVDC-MMRS Management Team provides integrated membership from the emergency preparedness and response teams from four Texas counties and their local medical facilities, over 46 independent towns and cities, and more than 20 Texas state and and U.S. federal government agencies. For additional information on the Metropolitan Medical Response System, visit their website: http://www.lrgvdc.org/mmrs.html.