Eric Molina has an amazing story to tell of how a small town kid from Lyford in Willacy County turned one of his interests into a man’s career in one of today’s dominant sports.  He is a shining example of where hard work, drive, grit, and a dream can take you.  And one of his finest moments recently unfolded under the bright lights of a Las Vegas ring. 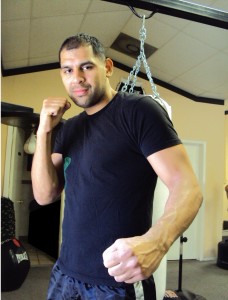 Molina thinks back and recalls hitting bags in his backyard as a kid with his friends and cousins.  They would record their antics and laugh at the playbacks.  But Molina grew to love the sport of boxing.  He made the decision to really pursue it and has given it all he has since then.

At 28, Molina is in his fourth year as a professional boxer.   He has spent time under Cavazos Boxing Promotions and Marines Promotions.  After becoming a free agent, he started off 2011 as a new signee with Don King Promotions and spent the month of February training in Miami, Florida.  That major feat did not come without its challenges.  The balance of pursing a college degree, working two jobs, and staying in top physical shape has taken a finesse that Molina has honed over time.  And his efforts have not gone unnoticed.  He is currently a Top 10 ranked WBC Cruiserweight and the WBC Latino Cruiserweight Title Holder.

“I don’t wear it on my sleeve.  Because I wasn’t supposed to achieve all this.  I have made it through challenges.  And at the end of my time boxing, I won’t be disappointed in what I’ve achieved,” Molina asserts.

Eric said that to me over the phone as I packed my suitcase, contemplating what all I would need for the trip.  The next morning, I boarded a flight bound for Las Vegas.  I was going to be there to see the “Drummer Boy” duke it out on the undercard of the Cotto vs. Mayorga main event set to take place on March 12th at the Grand Garden Arena at the MGM Grand.  After I first saw Eric box in Harlingen at the Casa de Amistad in May of 2009, I let him know I would be there to see him box one day in Las Vegas.  That was a promise I was going to keep.  You see, I graduated from Lyford High School with Eric in 2000.  And I could not be more proud of him and the goals he has set for himself and how he has worked to reach them.

At 3 pm the afternoon of Friday, March 11th on Vegas time, the weigh-in for the entire event got underway in the Grand Garden Arena.  The likes of promoters Don King and Bob Arum took to the stage.  Molina stepped up to the scales and weighed in at 227 pounds.  His opponent, Joseph Rabotte of Myrtle Beach, South Carolina, tipped the scales at 255 pounds.  The two were set to face off in 24 hours. 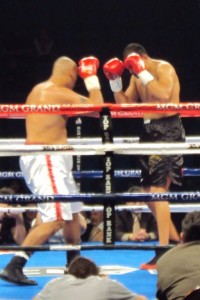 For Saturday’s fight, I ended up a total of 12 rows from the illuminated center ring.  The excitement built as I spotted a section of Eric’s family close by.  Eleven of his relatives were in attendance, including his cousin and our classmate, Michelle Frasier, as well as some of his friends from Weslaco and McAllen.

“We are very proud of all of Eric’s accomplishments and how far he has come.  We love him and wish him continued success and hope to see him as the first Hispanic world champion one day,” his cousin, Annie Gonzales expressed.

At 4 pm, Molina climbed through the ropes of the ring, followed by his team, including his brother and manager, Richard Molina, his trainer and cut man, Al Bonanni, who is the Director of Boxing for Don King Promotions, and his conditioning trainer, Erasmo Cuellar, of Weslaco’s Healthclub 722.

Molina was fighting out of the blue corner decked out in black trunks.  When the announcer’s booming voice said he was from “Lyford, Texas,” I immediately had chills.  South Texas had arrived on one of the biggest boxing platforms in the world.

As the first bell sounded, clusters of cheers repeatedly rang out for Molina from around the arena.  Rabotte was a formidable opponent, but Molina’s well-placed body blows and head punches dropped Rabotte to the mat in the second round.  He got back up, but he was right back down there in rounds five and six.  I couldn’t help but think to myself about that familiar cliché “the bigger they are, the harder they fall.” In round six, Rabotte had a point taken away for intentionally spitting out his mouthpiece, which was actually the second time it fell to the ground.  The first time, it was Molina’s doing.  Only later did I learn that Rabotte was suffering from a broken nose after a straight right to the face and was trying to buy himself a breather.  Molina persisted, and with one minute and 38 seconds left in the sixth and final round, referee Kenny Bayless called the fight, awarding Eric “Drummer Boy” Molina the technical knockout victory.  His record now stands at 17-1, with 13 wins coming by way of knockout.

Valley supporters were ecstatic.  As I looked around the arena, the magnitude of Eric’s achievement was not lost on me.  He was proud to be there representing the Valley, a platform he had reached beyond all odds.  From his backyard to the Las Vegas ring, the “Super Bowl” of boxing, to him, had to feel like a massive expanse that his efforts and determination just swallowed up.  He made it.  And he won. “Boxing retires men.  But I’m not going to let that happen to me,” Molina professed with earnest. That statement is the tip of the iceberg of what Eric Molina sees for his future.  His pursuits will continue down the boxing road.  And there is no telling where all that will lead.  Shortly after his March victory, the Molina brothers were contacted by legendary HBO commentator and hall of fame trainer Emanuel Steward.  He is known for training current world champions such as Miguel Cotto, Jermain Taylor, and the Klitschko brothers.  Steward is interested in training Molina and taking his career to the next level.  But what further amazes me about Eric’s story is what else he plans to do.

“This is not going to be the greatest thing I do in my life,” he stated calmly.

Molina has earned his Bachelor of Science degree in Interdisciplinary Studies, plans to start his Masters degree in January, and gained his certification to work with special education students.  That is where he sees his future when he hangs up the gloves for the last time – in a classroom, teaching special education right here in the Valley that encouraged his start and has supported his dreams from the beginning.

When asked about the significance of his nickname, “Drummer Boy,” Molina explains his good luck charm by offering this example: it is the drummer boys who lead the soldiers at the front line into battle.  That is rather symbolic of how Molina lives; he is on the front line in the ring and has aspirations of one day being on the front line of education.  When I think of the further potential of Eric’s path in life, one amusing thing comes to mind: “and the beat goes on . . .”

At press time, Eric Molina’s next bout was scheduled for Easter weekend in April at the Nokia Theater in Los Angeles.