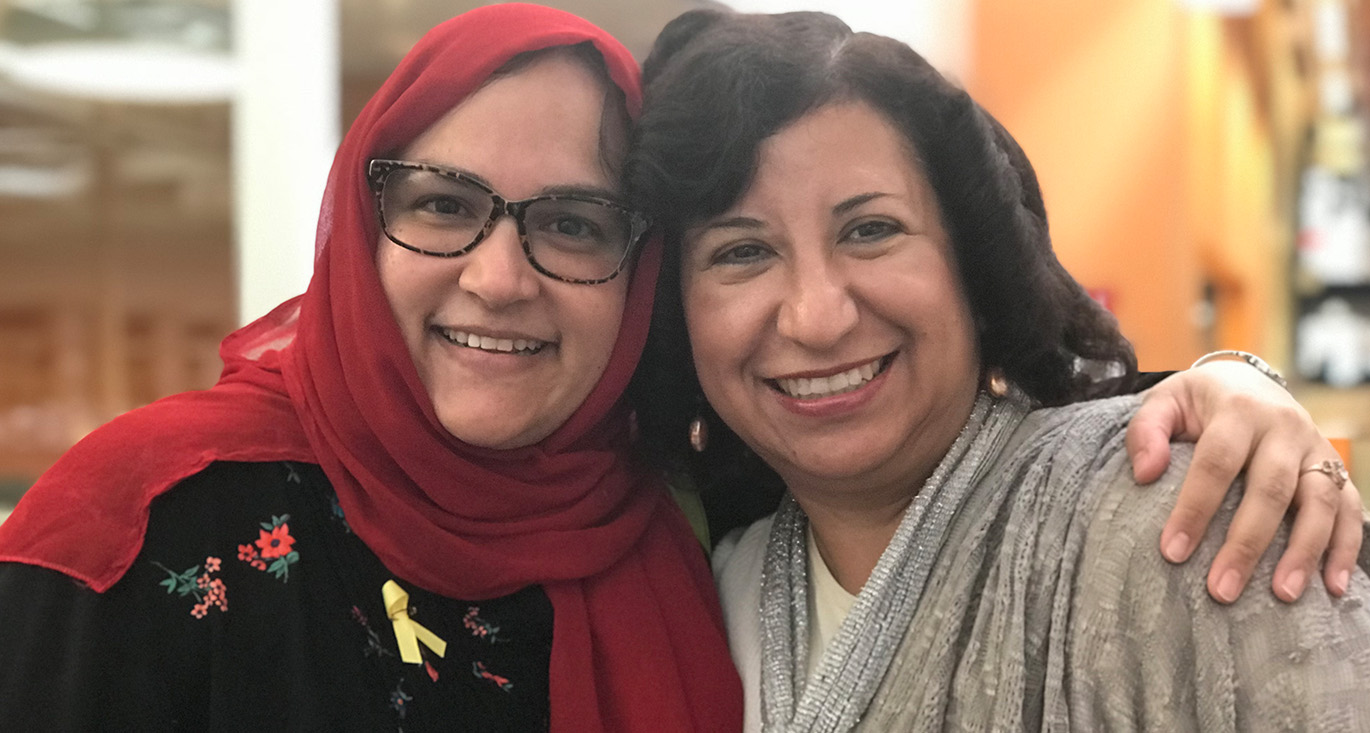 Alma Ruth understands immigration better than most — especially since she’s done missionary work around the world, witnessing firsthand the movement and struggle of people along many different borders. She’s also a recent immigrant to the United States, herself.

Now, the mother of two is dedicating her time and effort to serving needs here, along the U.S.-Mexico border, and abroad as a 21st-century missionary. 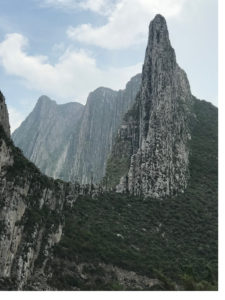 “My perspective is shaped first and foremost by faith,” Ruth said. “Also, as an immigrant — I’m a very recent Mexican female immigrant who has served in a global context. I have lived in other parts of the world where immigration is an issue and I have seen people die because of it.”

Ruth has served in Cuba, Honduras, the Middle East, Eastern Europe, and other locations around the globe.

“My type of service has been very different,” she said. “Traditionally, missionaries leave their country of origin. They go and live with the people in another country for long term. They try to make a difference for the people they’re serving.”

That tradition is changing as time — and needs — shift. Ruth has had a hand in helping Mexican seminary students branch out throughout the world — part of the first generation of global Mexican missionaries.

Ruth serves here on the border during the school year. In the summers, she looks forward to traveling and serving with her sons.

“To finance my humanitarian services, I am seeking to become a social entrepreneur, to launch a blog and become an inspirational speaker,” Ruth said. Her website, Love Mercy, is in its beginnings, and features a link for donations. She also plans to purchase and resell artisan jewelry from indigenous women in Southern Mexico to help fund her efforts — and support those jewelry-makers.

Ruth recently attended an immersive training for clergy organized by the United Methodist Church — an experience she called “life-changing.” It featured tours of the border and a behind-the-scenes look at the Catholic Charities of the Rio Grande Valley Humanitarian Respite Center, as well as talks by an immigration attorney, organizers of a nonprofit organization dedicated to combatting human trafficking, members of a group working in RGV colonias, and Sister Norma Pimentel, organizer of the region’s original response to the surge of immigrants and unaccompanied minors in 2014.

“Like Sister Norma Pimentel told us, to be aware of human suffering, we cannot stop being human,” Ruth said. “I’m personally a follower of Jesus and He has given us two orders: to love God and to love our neighbor regardless.”

Loving thy neighbor is quite literal when it comes to immigration in the Valley, Pimentel pointed out.

“I think that sometimes we have the dream of going off to Africa or somewhere and really help these poor families and people we see sometimes on television,” she said. “We have them here in our own backyard, in our own community arriving daily and needing our help.”

Immigration is a hot-button topic in both the RGV and beyond. Summer 2018 saw family separations of immigrants, as well as thousands of troops deployed along the border in the fall in response to a “migrant caravan” of Central American asylum-seekers. But for Ruth, politics shouldn’t come into play when it comes to responding to humanitarian issues.

“Politics and humanity are two different things,” Ruth said. “I can have a very strong opinion about politics, but please don’t stop being a human being and feeling empathy for your human neighbor.”

And politics never played a factor for Pimentel as she spearheaded relief efforts for the immigrants being dropped off at the bus station in downtown McAllen.

“Our main focus has always been a humanitarian response,” Pimentel said. “It’s not political at all — it’s just simply focused on the families that are here in our community that need help.”

Many are fleeing terrible circumstances in their home countries, Ruth observed. 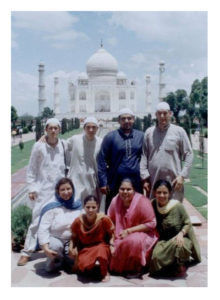 “They are not pursuing the American dream, which would be awesome, but they’re escaping a Central American nightmare,” she said. “I think we could handle it better instead of a militarized response.”

Better responses might come easier if individuals could experience what immigration really looks like in the Rio Grande Valley, Pimentel said.

“They should come and see,” she said. “It is important that they be able to see for themselves what the border is like and that our community here is not a war-torn country, where you should be afraid.”

Ruth remarked that her friends in the Middle East often asked her if she was safe on the U.S.-Mexico border, highlighting the disparity between outside perception of the region versus reality.

“We actually are a community with a great compassion and care for strangers because for the most part, a great number of people here on the border are immigrants,” Pimentel said. “We understand the plight of the immigrant.”

The United States has an opportunity to thrive in the global spotlight with its response to immigration right here in the Rio Grande Valley, Ruth said.

“We can shine the light in the darkness and we can show the world what we’re made of,” Ruth said. “We can do that because we have more than enough in America. We have the best of the world here and we surely can handle immigration reform — if we want to.”

Pimentel pointed out the need for a shift in attitude about immigration and the border, including the intentions of the families who cross it.

“Yes, our borders need to be safe, and they are — we have Border Patrol doing their job,” she said. “But we must also address an immigration process that is not responding to our needs of today, of why these families are persecuted because of the criminality that exists in their countries. We must recognize them as refugees.”

Being a religious institution has helped pave the way for Catholic Charities — and Pimentel — to be a force of nature when it comes to the region’s humanitarian response to immigrants. But that doesn’t dictate who is allowed to take part in those efforts.

“It doesn’t matter what faith or denomination you are,” Pimentel said. “It’s the simple fact that you feel called to help others who are hurting.”

She added that people on all ends of the religious — and political — spectrum serve at the respite center, from retired nuns to groups from across the country. It comes down to who is called to serve, she said. 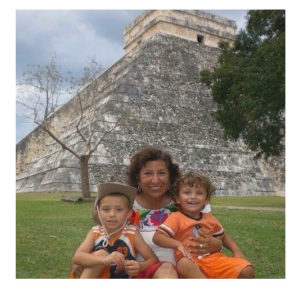 “We need to check with Him early in the morning, when we open our eyes. That’s one thing that I like to do, is start with Him because I think there’s where He lines up people that He has in mind that He wants you to help,” Pimentel said. “We must be attentive to those people He puts before us in our day. I think that today the immigrant is someone who is here in our country asking for help. They need help in many ways.”

That help comes in many different forms — helping immigrants contact their families to buy bus tickets, sorting out representation in court, or volunteering.

On the front porch of the McAllen respite center, the doors and windows were thrown open on a sunny Monday afternoon to accommodate the flux of volunteers, donations, workers, immigrants, and cool breezes.

“Bienvenidos,” Pimentel called to a line of immigrants waiting to enter the respite center, some wearing surgical masks. A young girl, mouth slack with exhaustion, leaned bonelessly against an adult. “Bienvenidos.” It’s the same greeting printed on a banner draped over the entrance.

Pimentel sat in a chair on the porch, shaded by hibiscus in bloom. An elderly woman approached, voice quavering as she asked what she could do to help. She pressed a folded bill into Pimentel’s palm.

The biggest need at the respite center, Pimentel said, is the simplest: socks and underwear. If nothing else, those who come to the center can have something clean to wear after they shower to act as a barrier to their dirty clothes and shoes.

Other needed items include hygiene products like shampoo, soap, shavers for the men, rubber bands for little girls’ hair, and food for the snack bags assembled at the center and sent on immigrants’ bus journeys to friends and family scattered across the country, waiting for their cases to proceed. 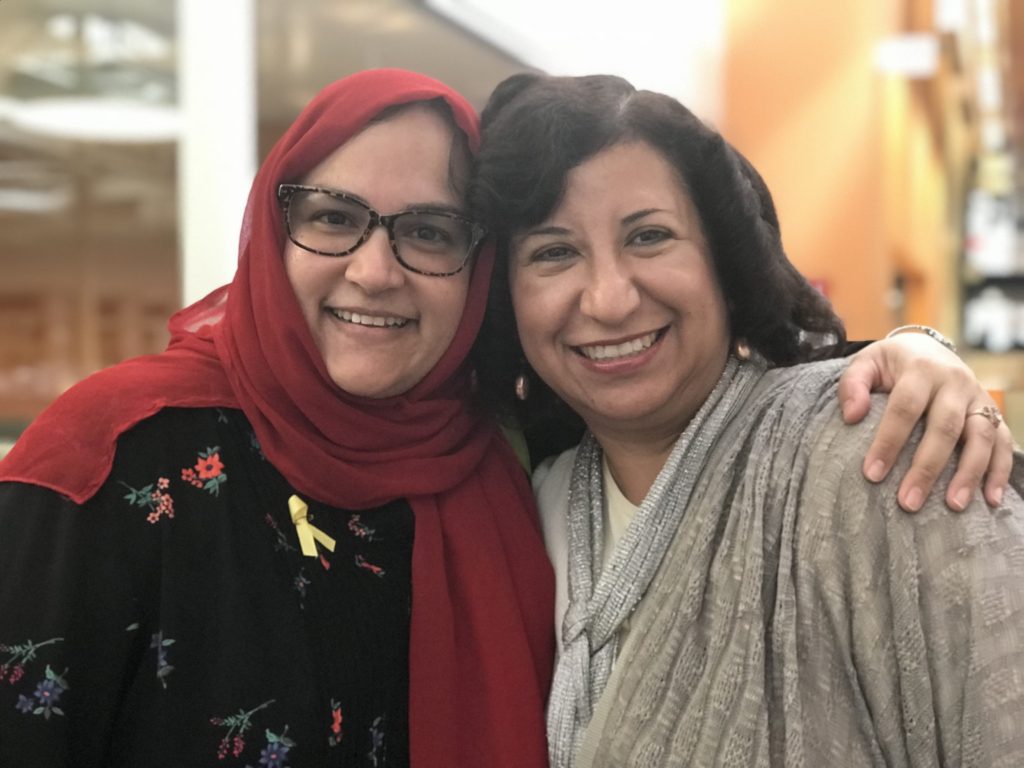 “By the time they arrive at the Catholic Charities respite center, they’re tired, they’re hungry, they’re sick,” Ruth said, recalling what Pimentel told the clergy during the training about immigrants’ experiences. “Usually the respite center is the first place where they’re received with warm food, clothes, and a smile.”

The dinner menu there can vary based on what volunteers bring, but one constant is coffee at breakfast — coffee no matter what.

“I remember one time we had this little boy who said it was his birthday,” Pimentel recalled. “The father asked him, ‘what would you like for your birthday?’ ‘Una taza de cafe bien rica.’” She laughed at the memory. “That was what he would love for his birthday, a cup of coffee.”

A cup of coffee. Clean socks and underwear. A smile. Bienvenidos. 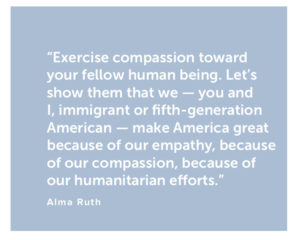 Because of a calling to serve a need.

“I think God has really wired us just right for everybody — when you see a family in crisis, a person hurting, suffering, it is automatic for us to want to help,” Pimentel said. “It’s very Christian. It’s also very American.”

Learn more about Catholic Charities of the Rio Grande Valley and the Humanitarian Respite Center at www.catholiccharitiesrgv.org/respitecenter/home.aspx. Learn more about Alma Ruth’s work at love-mercy.org/.