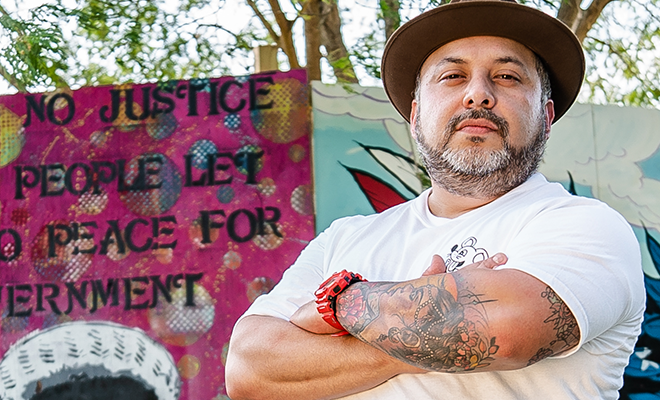 McAllen’s famed arts district is known for its vast array of entertainment and presentation options for both artists and art admirers alike. The area is home to the Art Village, a 30,000-square-foot Tuscan-style retail structure that spans across four buildings containing art galleries, studios, creative firms, and restaurants.

Art Walk also is held in the area monthly from September to May the first Friday of every month. The Creative Incubator is another key element in the arts district, which was designed to help support and provide a home for local artists.

One Valley artist making a name for himself amid this artistic atmosphere is Jason Ray Perez. Born in Weslaco, Perez has always been an artist at heart, but didn’t start to pursue it professionally until 2007 after visiting a friend’s art exhibit.

“I met the people and liked the energy that they had going on. I got really, really inspired,” Perez said. “So I started doing it more and more often. Then when the first Art Walk started in McAllen, I started getting involved there at the table. And that’s pretty much how I started off.”

Perez said the owner of Roosevelt’s at 7 asked him to begin displaying his art inside the restaurant, which in turn led to sales, helping launch his success.

In addition to being an artist, Perez is also the art curator for the Phoenix Art Gallery, as well as art director for both The Centennial Speakeasy Club and Roosevelt’s at 7. Being an art curator or director essentially means that he is the individual who chooses the art that gets displayed as well as the person organizing and hosting art shows.

Perez uses both mixed media and pyrography to carry out his art works. Pyrography is an art technique that involves burning a design onto a surface using a heated metallic point.

“It’s sort of like a pencil that you connect to an electric source and it generates heat,” Perez said. “So the tip burns when you place it against the wood and you’re able to make the image out of the burned lines.”

Perez has had several of his artworks recognized by Texas state Rep. Terry Canales, and they are currently on display in the Texas State Capitol in Austin.

This April, he was asked to join world-renowned artist Ron English at the National Butterfly Center in Mission at the nature preserve’s Welcome Wall event.

“I was one of the lucky eight artists from the entire state of Texas who was chosen to go into the loft. It was really cool,” Perez said. “Pretty much what it is, is a Welcome Wall. Where Donald Trump’s border wall is meant to keep out, we’re doing this to welcome people in. So it actually has doors on it and a lot of [English’s] art.”

The 360-foot mural encourages community activism opposed to border wall construction. Perez explained that aside from cutting through people’s land, the border wall is expected to cause other issues like flash flooding and wildlife endangerment.

Among these concerns, the wall’s construction will also put the 900-year-old Moctezuma Bald Cypress, one of the oldest trees left in South Texas, on the Mexico side of the wall.

Perez’s most recent art collection, Laconism, was a mixed media pop art collection. The series was inspired by art styles of some of his favorite American pop artists. Perez used an image printing technique he calls “ghost image transfer” to print images of movie stars and religious icons over vibrant, intricately painted canvases.

His next art collection draws some fresh inspiration from some familiar confections.

“Right now I’m working on a new series called Dulces,” Perez said. “It’ll be a mixed media project consisting of spray paint and Mexican candy wrappers. Each piece will depict the faces of revolutionaries with Mexican roots and current events such as the border wall and immigration. I think they’re going to be pretty amazing.”

Perez said although he doesn’t have a deadline for his Dulces collection, he expects to have it finished before the end of this year.

Of the arts district, Perez said he’ll continue doing his part to nurture it and keep growing the Valley art culture.

“It’s a beautiful area,” Perez said. “It’s called the art district for a reason. We want to keep it going as much as we possibly can.”

To find out more about Jason Ray Perez’s art and upcoming events, check out his social media pages on Facebook: facebook.com/jason.perez.7311 and Instagram: jperez_art.