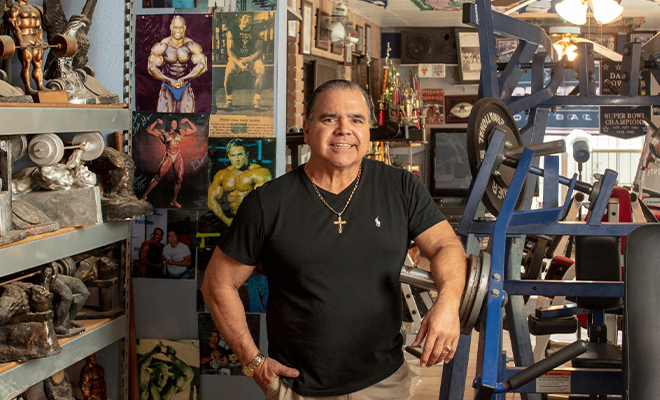 If you’ve been lucky enough to visit local bodybuilding and strength legend Tito Mata’s home, there is a lot to take in.

His walls are lined with photos of all classic bodybuilders. “All the old pros” is how Mata describes them. He is in the some of the images. Others look like they just came out of the magazine they appeared in.

On a large shelf he has trophies, many in the shape of a chiseled man starting a power clean or sitting on a bench press.

Of course, there is an exercise machine, as well, standard for any hardcore fitness fan. But that wasn’t the case when Mata started his career as a strongman.

“When I started lifting weights in the early 1970s, nobody was lifting weights,” he said. “Everyone told me not to do it. ‘You’re going to get muscle-bound’ and all the negative rumors and myths that you hear about weightlifting.”

In fact, Mata didn’t even have actually weights to put on a barbell when he started. He had to improvise from the start.

Tito’s Gym on Kings Highway in Brownsville is where the magic started. Before there were school-sanctioned lifting meets and bodybuilding competition at South Padre Island, it was Mata who hosted events for those who grew up in the Lower Rio Grande Valley in the ’80s and ’90s.

That makes the Brownsville native proud.

He worked to spread the movement. Now when he drives around his city and sees gyms and fitness centers on nearly every corner, he knows he had a lot to do with it. He even lobbied for decades to get powerlifting into Brownsville ISD schools.

“Everywhere I go, any gym I walk into, I run into all these people that are training. I trained them. I go to the (powerlifting) meets and a lot of the coaches, I trained,”  Mata said.

The 65-year-old veteran of steel pointed to one of his former prodigies, Rodney McClanahan, who he calls “the most famous guy in Brownsville” because of popular gym he owns: Hardknox Strength & Performance.

“We give thanks to him and I kind of owe a lot to him because my first experience with any type of gym was his. I was 10 years old at the time,” McClanahan said of Mata. “I can honestly say it literally sparked what I now call my love and my passion for the field. I ended up going to school for it, getting a master’s degree in it.”

McClanahan’s gym on Military Highway is similar in a lot of ways. No air conditioning, just individuals working hard to improve, strengthen, and bulk up.

The fitness craze has reached new heights in the last five to 10 years. Gyms are only the tip of the iceberg. There are businesses in clean eating and meal prep as well as personal trainers and sports training for youth sports.

Around the RGV, men and women are buckling down, stretching out, and bulking up at gyms to fine tune their bodies to peak performance and physique.

Even the attitude is different than when Mata idolized the likes of Arnold Schwarzenegger and Franco Columbo.

“It’s incredible,” he said. “What really gets to me is Latinas and Latinos didn’t work out (back then). They thought if you were sweating, it implied that you are a laborer.” Poetically, Mata met his wife in a gym after seeing her lifting weights.

He has a message to adults who are trying to battle father time.

“Cardio helps your lungs and heart. Progressive resistance, which is weightlifting, helps you produce hormones,” he said. “So if you’re lifting weights, you’re going to produce more hormones naturally. It’s good to do both. What the aging process is, your body slowly stops producing hormones. So being involved in progressive resistance, you’re turning the clock backwards.”

Do you work weightlifting into your exercise routine? #JoinTheConversation at facebook.com/rgvisionmagazine.