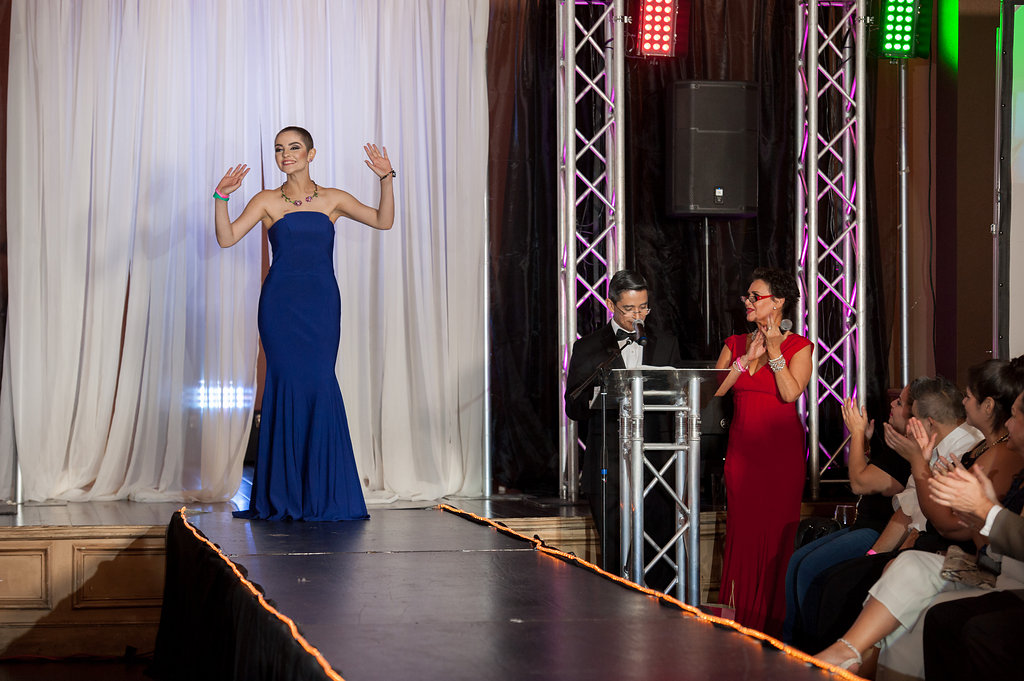 For three years now, the McAllen Chamber of Commerce has hosted an annual fashion show that puts original designs and local models on the runway to raise funds and awareness for a good cause: the battle against cancer.

Project Runway RGV 2016, held Thursday, September 29 at the Valencia Event Center in McAllen, once again showcased the unique creations of local fashion designers.  Each of the seven designers that participated created a red-carpet-ready dress to be judged in categories including Most Original Design, Best Drawing to Design, Best Quality of Construction, Best in Show and the People’s Choice award. The audience voted on the dresses, which were then auctioned off at the end of the night. Every dollar used to cast a vote supports the cause. Channel 4 News Anchor Eddie Flores was this year’s Project Runway RGV master of ceremonies.

Prior to the event, the McAllen Chamber of Commerce hosted a Day of Honor for survivors and warriors in the fight against cancer. Participants received makeovers from makeup artists and hairstylists who partnered to form the official Project Runway 2016 Creative Team. “This team of very talented artists also create a ‘look’ to complete the vision of our designers’ creations by styling our celebrity models,” said McAllen Chamber of Commerce VP of Special Projects Gerry Garcia.

The honored guests accompanied their new look with fashions provided by Macy’s at the Project Runway RGV event. Their confidence radiated down the runway as they were photographed by Gerardo Garmendia, Oscar Salgado and Juan Macias, with video by Project Videographer Josh Moroles. These individuals, along with Production Director Mario Arredondo, completed the creative team.

Among the women honored was teen model Andrea Sierra Salazar. After being diagnosed at 17 years old with stage 2 nodular sclerosis Hodgkin lymphoma, she started modeling as a way to distract herself from treatments and instead focus on her dream. After a princess-themed photoshoot catapulted her to national spotlight, she is putting aside any negative feelings she once had for her illness to raise awareness for the cause.  As she wrote on her facebook: “This journey has taught me to love and accept myself regardless of the way I look. The hair on someone’s head doesn’t define who they are. All girls are princesses, and today I feel beautiful inside and out.” Aside from the TV appearances, print and online articles by which she shares her story, she participates in fashion shows that raised money for cancer research, like Project Runway RGV and MD Anderson’s recent “Give Cancer the Boot” fashion show fundraiser.

All of the proceeds from the event will benefit cancer research for cancers that affect women, as well as the Chamber’s programs that foster and promote entrepreneurship, innovation and creativity.  This memorable event was a success and with the support of the Rio Grande Valley, it can continue to make a significant difference in the lives of women. In 2014,  through the first Project Runway RGV $7,500 was raised for the Mary Kay Foundation for cancer research and another $1,000 was to local individuals currently undergoing cancer treatment.

Check out the gallery below to see the looks!