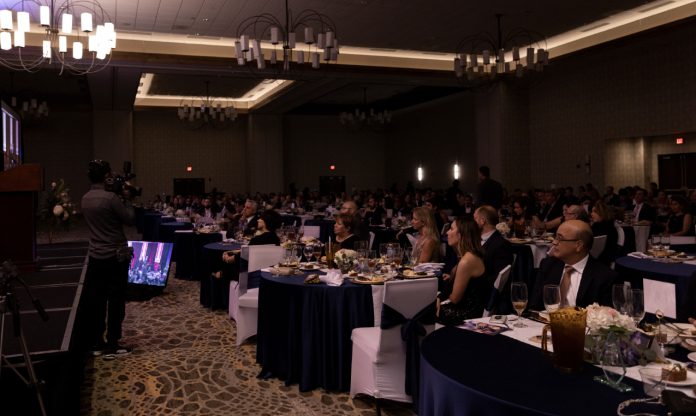 Upon entering the room, you are greeted with several people dressed in beautiful and elegant clothing, walking around and mingling with one another. Soon, the lights dim until the primary light source is the brightly illuminated stage. Servers instantly started making their rounds, offering refreshments as people began to settle in. As the noises started to die down, the Master of Ceremonies, Dr. Art Cavazos, made his way to the podium and addressed the audience.

It was the first event since the COVID-19 pandemic where businesses and members of the chamber received awards for excellent service. The event also marked the official introduction and passing the baton from past to future chamber board officers. 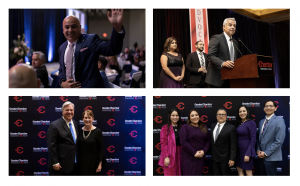 The first annual gala served as congratulations to the businesses who managed to not only survive the pandemic but to find ways to adapt and become better because of it.

The keynote speaker for the evening was Julian Alvarez III, the current commissioner representing the Labor of Texas Workforce Commission. Alvarez, who is from Harlingen, was sworn into his current position in 2016, and he shared a few words about that experience that later shaped how he would promote the Texas workforce.

Since taking on the role, Alvarez and his team have been working tirelessly with city officials around Texas to help close the skills gap.Their efforts are also being felt at the secondary education level as Harlingen CISD is the first school district in Texas to implement virtual reality equipment training for their high school students.

Through their efforts, the unemployment rate of Texas has dropped to 5.9% and has continued to decline since the event. The drop is impressive since our society is still readjusting to life as we now know it. Alvarez also acknowledged how difficult the pandemic has been for people and businesses, including the commission.

“Now, I would be remiss if I didn’t acknowledge that fact,” he said. “During the pandemic, we as an agency were receiving 62 calls every second of the day. Pick up how overwhelmed we were, but we were listening to the industry at the same time. We were talking to our legislators. We talked to higher ed. We were listening. We were able actually to put these individuals into employment right away.”

As the event continued, many businesses and individuals received awards for their exceptional work and dedication, especially during the pandemic. This year, there were also three new awards: the Chairman’s Choice Award, the Nonprofit Excellence Award, the Woman Empowerment Award, and the Achievement and Community Outreach Award. These new awards rewarded and promoted businesses’ efforts to foster a more inclusive and equitable environment.

The Greater Chamber of Harlingen’s Javier De Leon stated,“The expectation from the community, business and industry and our Chamber of Commerce members is one that we do not take lightly. The Chamber team is constantly looking towards not only ways of being relevant, but continue to build a chamber that is the synergy of information in Harlingen. Our laser focus goal will be to look at ways to bring in business, but more importantly, to ensure that the businesses that invested in our community have all the resources available for their success.”

The first annual gala for the Greater Chamber of Harlingen signals a new beginning for economic prosperity within the Rio Grande Valley.