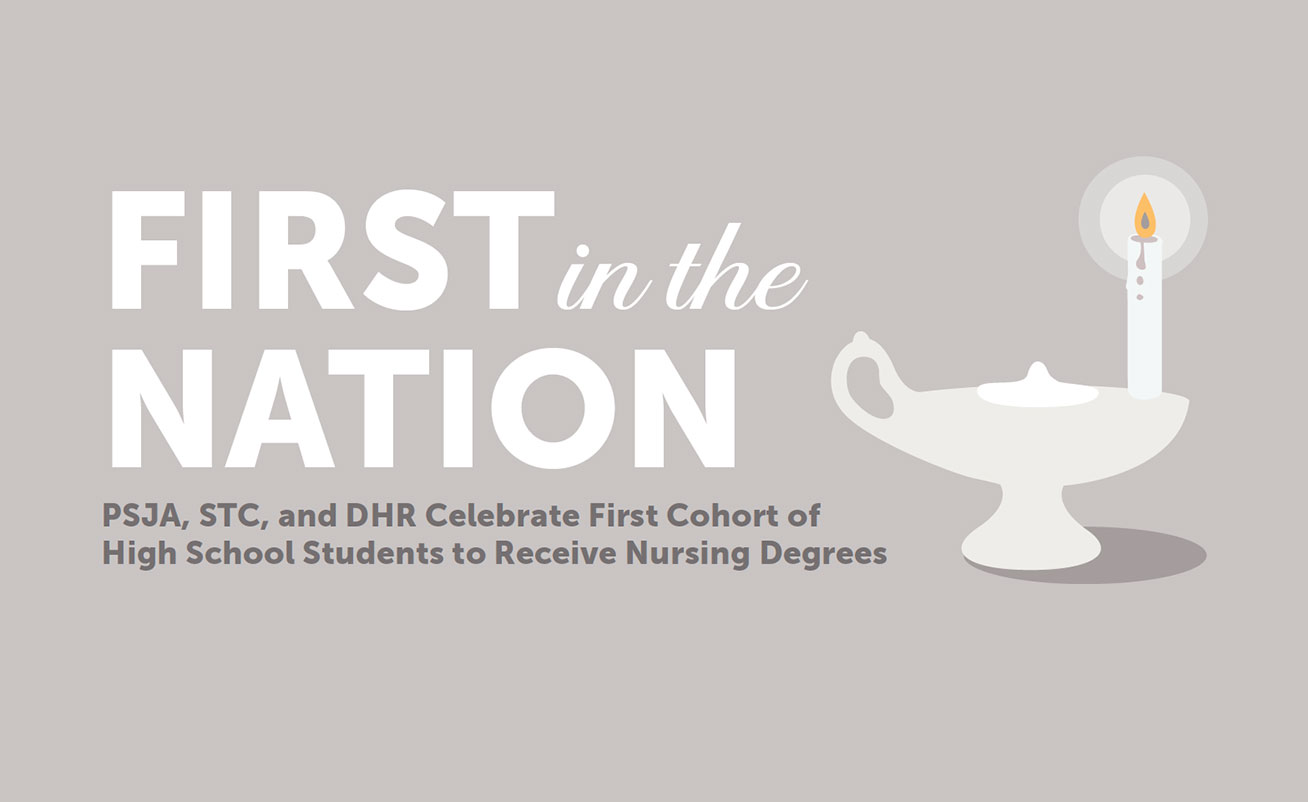 Eight students in the Pharr-San Juan-Alamo Independent School District (PSJA ISD) have accomplished what no other student in the nation has attempted, by becoming the first students to graduate with their Associate Degree in Nursing (ADN) while in high school.

Stemming from the high-demand of nurses in the area, the PSJA Nursing Career Pathway Program was launched in 2015 thanks to a partnership with PSJA ISD, South Texas College (STC) and Doctor’s Hospital at Renaissance (DHR). After seeking approval from the State Board of Nursing, the partnership dared to take on what no other educational institutions had done before, create a unique pilot program set out to allow a cohort of students to be the first to complete their Associate Degree in Nursing while in high school.

After two years of hard work and rigorous exams, eight PSJA ISD seniors graduated from South Texas College on May 12, 2017 with their ADN’s one-week before their high school graduation. They will now sit for the National Council Licensure Examination for Registered Nurses (NCLEX-RN).

Due to their tremendous accomplishment, the students have received high praise from their teachers, family and have been honored by STC and DHR during separate special Pinning Ceremonies. Despite the attention their feat has garnered, the students humbly admit that the journey was far from easy and took a lot of personal sacrifices, courage and strength to succeed.

For Alexia Marez, a PSJA Memorial Early College High School graduate, and one of the eight nursing students, her desire to succeed in the program was fueled by the need to inspire her three younger sisters, whom she helped care for, in the past two years. Dealing with personal struggles at home resulted in her stepping up as a parent for her siblings while working toward her high school diploma and juggling the rigorous curriculum of the dual enrollment program.

“Having to be a parent for my siblings inspired me to do better and succeed,” shared the 17-year-old. “I wanted to show them that if I could do it, they could do it also.”

Feeling down at times and on the verge of giving up, she recalled relying on her classmates and teachers who helped lift her spirits and remind her of her goal.

“I remember having study groups in the library and one summer coming together to support each other,” said the nursing graduate as she wiped a tear recalling their preparation for the Health Education Systems Incorporated (HESI) entrance exam. “As we grew together in this program we became a family, I found the support and love I needed in them.”

While Marez feels saddened at the thought of the group going separate ways to pursue their Bachelor’s Degrees, the young graduate said she plans to attend Texas A&M University College Station and major in Biomedical Science.

Grateful for the opportunity presented to them, the students thanked their family, friends, teachers and key individuals who played a major role in encouraging them throughout the program, including their STC Clinical instructor Cynthia Shartle, the PSJA Program Coordinator Brenda Ambuehl and their bus driver Noel Gonzalez who was a part of their lives for the last two years.

“Thank you to everyone for all of your support,” Luis Silos said. “You helped us start this program and finish it. We couldn’t have done this without you.”

For PSJA ISD Superintendent of Schools Dr. Daniel King, having successfully graduated the first cohort of nursing students in the program filled him with joy and hope for the future of PSJA ISD and the Rio Grande Valley.

“We are extremely proud of our students for their commitment and hard work in completing this rigorous program,” Dr. King said. “Thank you to our dedicated staff and partners for their continuous support throughout this journey.”