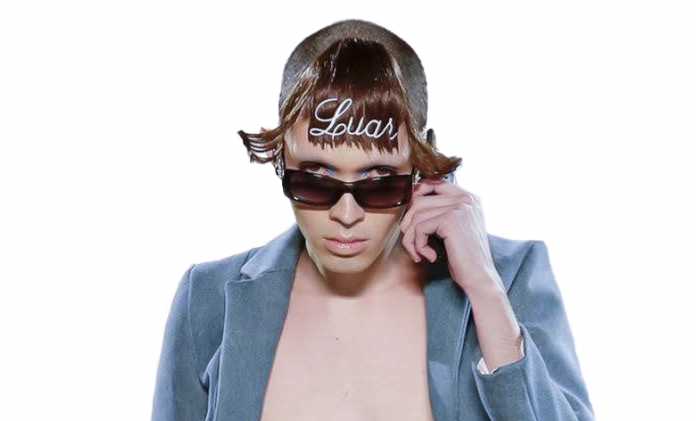 The Brownsville Fashion Week (BFW) was held on Zoom last year because of the COVID-19 pandemic. During the week of May 24-30, designers, stylists, and models hosted workshops regarding photography and makeup, to name a few. Alongside daily workshops, the event had five runway shows broadcasted on BTV local Brownsville network, Spectrum Cable Channel 1300, and Digital TV Channel 12. One of the presenters was Nolan “Fish Fiorucci” Navarro, a Brownsville native. Navarro (who uses they/them pronouns) worked behind the scenes for BFW. They produced graphics for the event and edited videos for TV. Navarro also dressed up every day during the week to show the 300 participants how serious they were about the event.

Navarro has garnered more accomplishments alongside hosting BFW, such as being profiled in Vogue and Texas Monthly and starting a modeling agency in the Rio Grande Valley.

However, they struggled to land jobs when they were younger while living only in Texas. Once they moved to New York City, they felt accepted because of the culture. For example, seeing half-naked models walking around is not uncommon. Before coming to New York, they lived in Austin. There, Navarro was interning at a modeling agency and was offered a chance to be a model at it. After they signed with the agency, the Valley native headed north to New York. 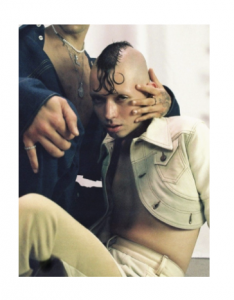 With the opportunity, Navarro wanted to bring three male models with them who lived in several cities such as Brownsville, San Antonio, and Corpus Christi. The group of Texan models has known each other since high school, according to Navarro. However, Navarro and the three models needed an affordable place to stay in New York City. Thus, the Texan models stayed at Ruth Elizabeth’s apartment, a friend of Navarro. The two met back in high school, but she left, and “nobody knew where she went,” Navarro explained. They reconnected during a spring break at a vegan restaurant in New York, where Elizabeth worked as a waitress. After exchanging pleasantries, Navarro asked her about affording an apartment in the city. She mentioned to Navarro that she had an extra room, and “her landlord never comes to check up on it,” they added. Thus, Navarro and the three models lived in a 5-foot-tall apartment, each paying $200 for rent.

Navarro’s first visit to New York City culture-shocked them. They felt similarly when in Austin, but New York City “was an extreme culture shock for me,” they said. The Valley native fell in love with the city. They could comfortably walk down the street half-naked in their heels. However, if they did that in the Rio Grande Valley, “[people would] want to take [pictures, and] they want to annoy you or whatever,” Navarro said.

Every visit since then is all business. Navarro mentioned they have never been to the Statue of Liberty or the 9/11 Memorial. They said their work does not have opportunities to tour the city.

“There’s always times where I get a call [for a meeting and] it’s 45 minutes away, and the meeting [is] going to be in 30 minutes,” Navarro recalled. “So it’s always on the go, I never [had] the time to be in one place long enough without me getting [a] call or [receiving texts] that I have to be somewhere else.”

Navarro grew up and currently lives in Brownsville. It is where they started their fashion career. They first worked behind the scenes setting up shows at clubs throughout the Rio Grande Valley. The shows they put together were “chaotic fashion shows at the [clubs],” they said.

“I [wanted] to do … crazy curated events that are in the middle of nowhere, and that’s what I do now,” Navarro said. “But back then, it was just something I had to experience to make my way into the rest of [the growing fashion scene in the Rio Grande Valley].”

Downtown Brownsville is where Navarro does their work when in Texas; their apartment is near their agency. The area is also where Navarro escapes from their parents. Once, Navarro’s parents hid the model’s heels in their attic, but they found them in an “extremely hidden” spot.

“My parents are very conservative and extremely religious,” the non-binary model said. “They always push that religious agenda on me. I grew to accept who I am and that came from separating myself from them as much as I can without disrespecting them. So, it’s just kind of like this love-hate relationship.”

The model faced struggles beyond their home as well. Specifically, being bullied while in elementary to high school sophomore year in Los Fresnos. After being sexually assaulted as a junior in high school, their parents transferred them to Hanna Early College High School in Brownsville. Starting fresh at a new school helped them express their interest in fashion because of a different dress code policy.

“I popped into this new school with a whole new attitude, a whole new look, and just walked in with the confidence that I never thought I could have before,” Navarro said. “It was just kind of preparing myself to walk into the door and sell this story that people didn’t know I was doing or had hidden in my mind.”
Before they garnered attention, Navarro kept their interest in fashion private because they were scared people would judge them. There were not any extracurriculars they felt like they belonged to, which added to their fears.

“I wanted to do something outside of school that was hidden from the people who I was going to school with because I didn’t want them to know what I was doing,” Navarro said. “I felt that I was building myself up underground for a few years until I felt like I had some kind of success in it … to let people know what I was doing.”

After high school, Navarro participated in New York Fashion Week. That is when they realized their career was getting “serious.” This was also when they revealed their work in the fashion industry.

“I didn’t want people to feel like I was lying to them or telling them a fake story about what I was doing outside of [school],” they said.

The fashion between the late ’90s to early 2000s is the inspiration for Navarro’s style. They also got ideas from how their sister dressed during the decades. The model described their look as “alarming when you see it.”

“It gets people … [to] just stare at you for 30 minutes,” Navarro said. “But I only do this because I feel like visibility is extremely important. If I didn’t dress that way I did, people wouldn’t be exposed to [it].”

Alongside their work in fashion, they are a mass communication junior at the University of Texas Rio Grande Valley. The public relations coursework they do helped them link the major to their career. It will also aid Navarro if they are not modeling in the future.

“I see myself working in the fashion industry for the rest of my life and whether [as] a model or where it’s not modeling anymore, it’s always going to tie into fashion,” Navarro said.

Navarro is an experienced model. They wanted to share their expertise with the Valley, so they established f10, a sister company to an agency in London called The Contact Agency. The goals of f10 are to help models shine and challenge beauty standards. The agency is the first in Texas to sign a transgender model, a historic accomplishment to Navarro.

The advice Navarro gives to models is to research. There is exploitation and abuse in the industry; Navarro encountered it themselves while at jobs. They also encourage models to speak up about it.