Harlingen Waterworks draws upon a rich history first organized by past visionaries who had enough sense to realize the importance water would play in developing the region. Now, through its Board of Trustees, the department sets out with a new focus to change customer service and outreach by educating citizens and customers on how to conserve, how to lower costs, as well as the city’s unique position among other cities in the Rio Grande Valley.

Harlingen is at a very advantageous situation with their Waterworks not just with location, but from the work of prior Boards who were visionaries, and the acquired the water rights that will spur future development, according to Darrell Gunn, manager of Harlingen Waterworks System.

“We are a typical water, wastewater and reuse industry in that we furnish potable water, we take sewer and we also reuse wastewater effluent,” Gunn said.  “We’re a public service entity, but we’re non-profit. We are here to provide a service to our citizens at the lowest cost. That is, the best service at the lowest cost possible. We’re not in the business of making money for someone to profit. What it costs to provide a service is exactly what we charge.”

When Harlingen was incorporated in 1910, the town’s original water system and downtown water plant was constructed and owned by Central Power and Light. CP&L owned and operated it until 1940 when, as WWII loomed and the start of an airbase to the city was announced, the town’s original fathers had the foresight to see the potential benefits of the water business, Gunn said.

Five individuals at that time financed the purchase from CP&L for the city. After those bonds were serviced, the city took over the water and sewer system, but the Waterworks wasn’t established until the 1970s, when a referendum was passed to separate the utility system from the city and operate it as a separate department.

Harlingen Waterworks is now a wholly owned department of the city, which operates under a completely separate Board of Trustees. The five boardmembers are required to be customers, as well as local residents of the city. Trustees are appointed by the City Commission, and the current city charter establishes that they serve a maximum of two, four year terms on the Board.

“Our service area is actually larger than the corporate limits of Harlingen. Again, in the late 1970s they divided up utility service areas into “zones” they called a Certificate of Convenience of Necessity. That’s an odd name, but it established legally, the service areas where each utility was supposed to service,” Gunn said.

“They typically have their own alternate supply like others, but they supplement their water supply needs and wastewater needs from us,” he said. “We have interconnects with almost every utility around us.”

Utilizing the water from the Rio Grande River, Gunn said most of the water that is available comes out of northern Mexico or northwest Texas, and is dependent on the precipitation in those areas.

Water is allocated through a treaty between the State of Texas and Mexico that historically enabled the construction of reservoirs on the Rio Grande from Falcon to Amistad, which have enormous water capacity, Gunn said. That capacity is set aside either for irrigation or municipal usage through the purchase of water rights. Water is then released for consumption.

The City of Harlingen owns a significant amount of water rights, which has enabled city leaders to promote the excess to industry in need of high water volume, Gunn said.

“Last year, during the 2011 drought, we had customers calling routinely asking when do we have to ration water or when do we have to stop using water. Well, we don’t have a water shortage because we have excess water for the future,” Gunn said. “That’s one thing that the Board of Trustees is looking at doing to advance and promote Harlingen. It’s to promote and advertise for industries that use a lot of processed water or need large volumes of water. We have water to sell, but currently we are not in a water shortage.”

The Waterworks is in the business of taking river water and treating it to drinking water standards. It then distributes that to the system for customer use. Waterworks also specializes in treating wastewater in order to bring it to drinking water standards. The department is now promoting their reuse capacity, where a significant portion of that wastewater is reused for irrigation for parks and golf courses, Gunn said. 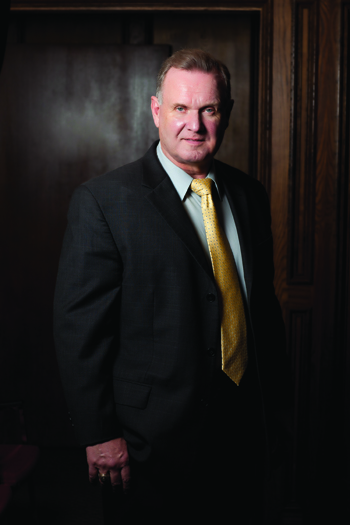 “Like I tell people, if you took a jar of Rio Grande River water and a jar of sewage and you’re having to treat both of them to drinking water standards, which one do you think would cost more? That’s right, sewage. Our largest effort is towards that,” Gunn said. “ when you talk about the environmental impact of that, many studies have shown that the extension of longevity of life has been more dependent on the improvement of environmental controls, not just here but throughout the United  States.

“Life expectancy is now in the eighties compared to 100 years ago when it was in the forties,” he said. That extension of life expectancy was the result of that was from environmental improvements such as wastewater and water treatment improvements.”