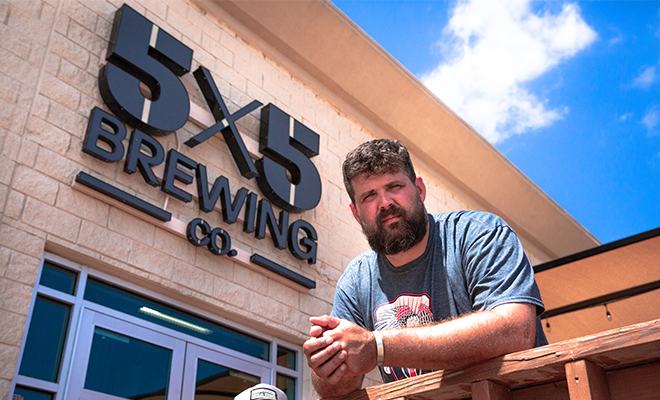 “There are many benefits to hiring a veteran in any job field,” former U.S. Special Intelligence Analyst Adam “Sarge” Shidler said.

“99 times out of 100, a veteran will have to put in more effort in doing something, but the output they’ll have will ultimately be greater,” he explained. “We’re accustomed to high demand, life and death situations. If you put us in something else, we will put that type of effort back into it.”

As a U.S. Special Intelligence analyst, Shidler dealt with drones and satellites daily.

“It had nothing to do with operating a business,” Shidler recalled. “The only thing it prepared me for was operating with people and operating in life and death situations.”

Shidler, 37, is the owner of Weslaco Daily Grind, a cafe that has been open for the last three years in Weslaco’s downtown area.

Schidler opened up Daily Grind after years of looking for a job after he was medically discharged from the military in 2012. He had been in the military since he was 20.

“I was looking for opportunities when I moved to the Valley, and briefly attended South Texas College and needed a job, but the only things available were welding or flipping burgers, so I went to the Air Force,” Schidler said. “After I was medically discharged, I went back to school for a semester and left because it was too expensive. I did a few odd jobs here and there and tried to find something that was meaningful again.”

After a few years, Schidler developed a hobby in brewing coffee and thought of a business opportunity.

“I’m very picky about the coffee I drink and wanted a good coffee shop that wasn’t a small operation,” he said. Weslaco Daily Grind prides itself in selling handcrafted coffee, teas, and pastries. It also hosts food trucks on its premises.

“I wanted a large place to have large groups of people coming in and found something in downtown Weslaco. We wanted to be part of the community — a reason for people to come down and gather here and be a staple in Weslaco,” Shidler said.

Shidler’s story is similar to that of George Rice, co-owner and director of operations of the Mission-based 5×5 Brewing Co.

The brewery has been open since 2018, housed in the city of Mission’s Center for Education and Economic Development. All of its co-owners are military veterans, Rice said.

Rice signed up to the U.S. Army Infantry after 9/11, like many veterans prepared to serve their country, he said.

“Halfway through my military career, I decided I was tired of playing G.I. Joe and came back to South Texas, finished college, and after working, I now have this brewery,” Rice said. “I want to show that veterans don’t have to be victims of professions. Their best days are still ahead of them, not behind them, so I wanted to show that they can succeed in the business world.” 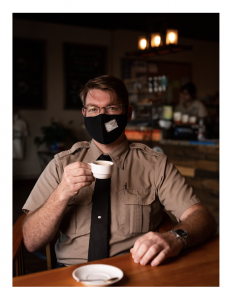 To get his business off the ground, Rice turned to the city of Mission for help, which directed him to programs that were part of the city’s economic development corporation and to the CEED building, where 5×5 is currently housed.

“We would not have been here without them and their guidance and support,” Rice recalled. “We do have a lot of veterans reaching out to us wanting to start their own business and asking us for advice, so we tell them the same thing. The military gave you so much to hone in your leadership skills and drive you to always push yourself. Capitalize on that and push it.”

To get his business started, Shidler got help from the UTRGV Veteran’s Outreach Center.

“That was the greatest resource. They got us in touch with the Small Business Administration, who got us under a business program, which provided us with workshops on how to conduct business,” he said. “It would’ve definitely been a whole lot harder to get started without that. These programs help you get a good foundation to help you open up your doors to prop you up to succeed, and then they let you operate on your own after that. After your business is established, it’s all about establishing relationships with the community — that’s the most important part of a business. Without it, the community will not support you. That’s what we spent the last three years building.”

Both men agreed that their military careers helped them succeed in business.

“Leading troops in combat and other soldiers makes the chaotic sense of leadership effective,” Rice said. “There’s a difference between being a leader and a manager — you learn that real quick.”

Cold brew or cold one? How do you unwind? #JoinTheConversation at facebook.com/rgvisionmagazine.