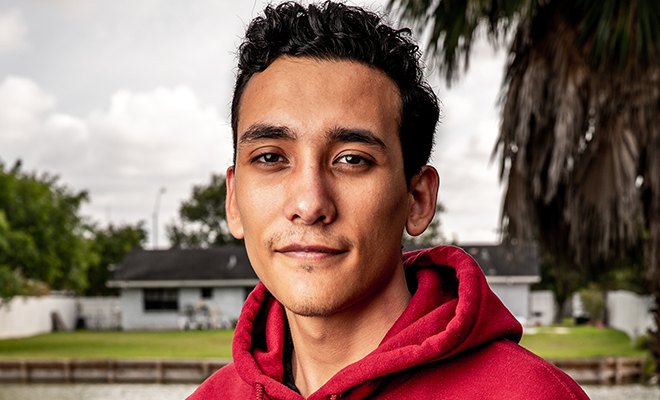 Victor Rangel is en route from Brownsville to Harvard University with a full paid scholarship awarded by the Gates Millennium Scholars Program. Rangel is a 2019 graduate from Harmony School of Innovation in Brownsville and is planning on pursuing a double major in biology and politics, hoping to one day bring to his community the change he wants to see in the world.

Rangel’s zeal for learning started in eighth grade after completing all of his high school math requirements online before he entered ninth grade. Wanting to keep the momentum in his self-led learning journey, he decided to always delve deeper into his interests, including creating opportunities for himself through leadership, volunteering, and scientific research at the University of Texas Rio Grande Valley during his senior year.

Rangel was president of the student council at his high school and a leader in the National Honor Society. With a stellar volunteer record, his love for learning and paving the way for excellence extended far beyond the classroom. After volunteering over two years at his local hospital, he was awarded the Congressional Award Gold Medal for volunteer service, which he received in Washington, D.C., and the President’s Volunteer Service Award.

With attending Harvard as one of his primary goals, Rangel started rigorously applying for scholarships and working on the application process at the start of his senior year. By December 2018, he discovered he had been accepted into the university of his dreams. And in April, he learned he was a recipient of the Gates Scholarship, funded by the Bill and Melinda Gates Foundation.

Although it was a bittersweet moment for Rangel’s family, since he would be moving far away from home, everyone was thrilled at the opportunities he would have at an Ivy League school.

Rangel aspires to continue the legacy of education and hard work in his family and attributes the inspiration of his success to his loved ones — especially his grandmother, who passed away a few years ago.

“Throughout my childhood, she made it a point to push me to educate myself more than my normal grade level would,” Rangel said.

In his Harvard entrance essay, Rangel mentioned that his grandmother moved to the United States from a small village in Mexico. Motivated toward success, she obtained a college degree with honors at 30 years old, and later became the director of the ESL Department for Texas Southmost College.

“She always told me, ‘it’s never too late, you have to keep trying.’ And if she could do it, I could do it,” Rangel said. “She told me that no matter what I do, my goal should be to do better than she did because she moved her family from a village to a city. Since then, I’ve been honoring her.”

After college, Rangel hopes to pursue politics. “I would really like to correct a lot of things I think are are wrong right now in the government,” he said, attributing his organization, leadership, time management, and public speaking skills to his accomplishments in high school.

Rangel hopes to spark fervor in future graduating classes of the Valley, and encourages current students to seek their own opportunities to serve the community.

“Coming from the Valley, I don’t believe that we have any disadvantages compared to other students. I think it’s just about dreaming big and trying your best,” Rangel said.

He advises high school students to take advanced classes, join clubs, acquire leadership positions, and involve themselves in helping the community. “High school is only four years, but it impacts the rest of your life,” he said. “It doesn’t matter what your passions are, but do something to change the community around you. There’s nothing that you really cannot do, it’s just about putting in the work and doing what you have to do.”