A lone knight dashes along the ground level of a large area, trailing bright green floating shapes. When he encounters an oversized scorpion, he makes his attack, sword arcing and illuminating the space in the same shade and intensity of green. When giant spiders join the mix, the knight reconfigures his defenses and fires a bright pink wave of energy produced from his sword. After leaping from platform to platform, dispatching scorpions and spiders alike, the knight encounters a hulking, menacing figure waiting for him, but everything fades to black.

Cruise Control is the video game development brainchild of Miguel Cruz and Jose Salinas, who established it in 2013-14 to give the Rio Grande Valley its first such company. On June 1, and alongside new art director Fred Esparza, the trio released the game demo, the first major title for the company.

Though “A Knight Named SOL” was Esparza’s vision, Cruz and Salinas supported the project. All three have experience working for big game companies like Blizzard Entertainment, WinterLeaf Entertainment, and Santa Monica Studios, among others. Esparza has only been with Cruise Control for a few months.

“Honestly, it’s felt like he’s been here since the beginning because we’ve done so much in such a small amount of time that it’s kind of mind blowing,” Cruz said. The team started work on the game in February of this year, and spent three months developing it.

Esparza returned to the Valley after studying in California and working for a variety of companies and contractors, looking for an opportunity to work in the region. He came across Cruise Control practically by chance, and even though he was in the process of interviewing for a spot in Google’s VR department, took a job with Cruz and Salinas. 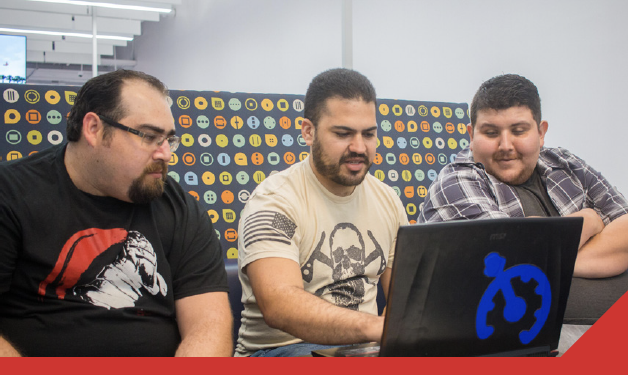 “I wanted something more indie,” Esparza said. “That’s something I was kind of looking forward to, not being in a very corporate environment. Some people enjoy it indefinitely, like, hey, man, it’s nice to have a steady paycheck, but there are certain freedoms that indie development allows you to have that I think are worth more than any kind of money.”

“A Knight Named SOL” stems from a student project Esparza started, though the game Cruise Control is releasing went through several evolutions since then. Some of the themes and concepts remain, though, like the two characters — a knight and a wizard. “A Knight Named SOL” features action RPG, side-scroller gameplay. Think Konami’s “Castlevania,” or even Nintendo’s “Super Mario Bros.”

“In the game itself, it actually evolves as you play it, so essentially you have the opportunity to have a completely unique experience every time you play it,” Esparza said. “There’s elements of randomness in the game that gives it a lot of ‘replayability.’ That’s something I’m really excited about.”

After the June 1 official early access launch, “A Knight Named SOL” was scheduled to become available on online game platform Steam a few weeks afterward, Cruz said. Early releases are primarily to drum up marketing funds, he explained, so they can market the game, which will take place from October through December of this year. Then, right before Christmas, if everything goes according to plan, the game will be available for purchase. And by summer 2018, the trio is looking to have “A Knight Named SOL” on PlayStation and Xbox.

The completion of “A Knight Named SOL” hasn’t been all fun and games. Being the first video game development company in the region has been challenging, especially since the nearest companies were in San Antonio and Austin. That means Cruise Control can’t necessarily bounce ideas off of colleagues in the area, access references, or solicit advice for their own projects.

“It’s a process because we’re having to learn everything on our own,” Cruz said. “Between the three of us, when we used to be in the industry, we were always the grunts, so we never actually knew the process or the paperwork that needs to be done.”

To help others in the region, though, Cruise Control has been working to mentor and advise middle and high school students and participate in the community, guest speaking at Hour of Code, for example, recently in Mission. Cruz said that the company receives emails from teachers and professors around the Valley asking for advice on shaping curriculum geared around video game development as it becomes more and more popular. But Cruz wants to develop a class of game developers here who don’t have to leave the region to pursue their dreams.

“We want to bring the game industry to the Valley, and we just want to try to keep the individuals that want to get into the industry here, to show them that we do have it here instead of having to go into a major city,” Cruz said. “We’re going as far as helping other game companies start up as well. Once we launch and once we’re more established, we’ll actually be good to help other individuals get into the industry.”

The efforts to collaborate and contribute to the region have shown others the good work Cruise Control has been doing. The company received a McAllen Chamber of Commerce Innovation Grant as well as a Ruby Red Ventures grant from the City of Mission.