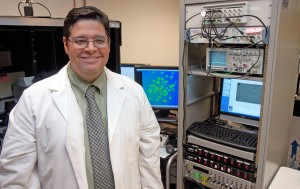 BROWNSVILLE, TEXAS – JUNE 3, 2011 – Dr. Emilio Garrido, an associate professor in the Department of Biomedicine in the College of Biomedical Sciences and Health Professions at The University of Texas at Brownsville and Texas Southmost College, recently received a $426,509 grant from the U.S. Department of Defense’s Peer Reviewed Medical Research Program and Congressionally-Directed Medical Research Program 2010.

“Epilepsy is a serious neurological disorder affecting more than two percent of the general population,” he said. “About one-third of patients remain resistant to medical treatments. Therefore, the treatment of epilepsy is an unmet medical challenge.”

“The main objective is to investigate potentially new mechanism of action of anti-epileptic drugs,” said Garrido, originally of Havana, Cuba and now a resident of Brownsville.

Unlike most epilepsy research focused on the post-synaptic mechanism of neuronal circuits, Garrido will look at the pre-synaptic active zones and how anti-epileptic drugs can reduce the release of pro-epileptic neurotransmitters as glutamate in the hippocampus, a part of the brain that is involved in temporal lobe epilepsy.

Garrido will do much of his work in the Biomedical Research and Health Professions Building scheduled to open in September. The structure will have four classrooms, 12 laboratories, three technology labs, eight faculty research facilities, 12 science research facilities and an outreach space. The building will have an expanded laboratory animal area and two hot and cold storage rooms.

“It’s going to be a new building and state-of-the art research facilities that will certainly open a new chapter on advanced biomedical research at our institution,” he said.

Garrido has studied epilepsy since his doctoral training in Brazil and Israel. He also did post-doctoral research on the subject in Germany and at The University of Maryland School of Medicine in Baltimore before joining the faculty at UTB/TSC in 2003.

“My main motivation in the investigation of epilepsy is to contribute to new knowledge that can ameliorate pharmacoresistance and provide more effective therapies for patients suffering from this devastating disease,” he said.

Garrido will work in collaboration with Dr. Patric K. Stanton, a professor of cell biology and anatomy at New York Medical College in Vahalla, N.Y.