For so many of us, scheduling an appointment with our family doctor for an annual check-up is low on our list of priorities. Invasive procedures though, such as a colonoscopy, are often even lower on our to-do list. The doctors and staff at the Texas Gastroenterology Institute (TGI) in McAllen understand the reluctance that many of their patients feel when a procedure such as a colonoscopy becomes necessary.

It is advised that men and women over the age of 50 have regular screenings for colorectal cancer.

“It’s the second leading cause of cancer death in the U.S.,” said Dr. Jose Rodriguez, founder of TGI, “and it’s probably one of the most preventable cancers, so that is the tragedy, that people are not getting screened.” TGI offers two types of screenings to patients: the traditional colonoscopy, and a newer, less invasive, virtual colonoscopy.

People living in the Rio Grande Valley are less likely to have either procedure done than their peers on a national level. Rodriguez attributes this to the lack of doctors specializing in gastroenterology in the Valley and has been trying to actively recruit a third doctor for his practice. Rodriguez, who was born in Cuba but grew up in South Florida, was drawn to the Valley not only for its warm climate similar to that of his childhood, but also the need for gastroenterologists in this region.

“But it’s very difficult,” he said about recruiting new doctors. “A lot of people will finish training and then they want to stay around the big cities where they trained, Houston, Dallas, New York, or California, so it’s difficult to get people to come to what they perceive as a rural setting.”

TGI provides a more comfortable and professional office setting for their patients to help relieve the stigma of the exams.

“We try to keep people out of the hospital and try to just treat them here,” Rodriguez said. “We have our office space endosuite so we can do endoscopy, colonoscopy, and other procedures here.”

Balderas provides a sort of comfort for female patients who would rather have procedures such as a colonoscopy done with a female doctor. Approximately 70 percent of her patients are female, and Balderas understands the needs of our female patients.

Balderas recognizes the importance of getting screened at age 50 as she has seen the consequences first hand with her own patients. 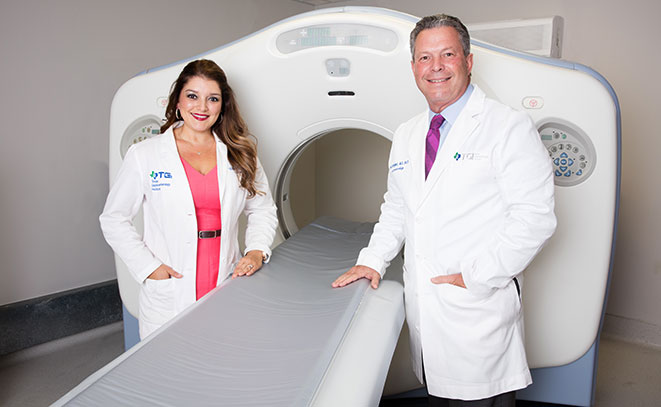 “A lot of times I see people who are 51 years old, (with) no symptoms whatsoever,” Balderas said. “I just diagnosed a patient two weeks ago with colon cancer who I sent for colon resection and it appeared to be localized. However, at the time of operation, it was more advanced that what we originally suspected and now the patient will need chemotherapy.”

It’s imperative to get screened sooner rather than later. The sooner any abnormalities are detected, the easier it is for them to be treated.

The friendly staff and doctors of the newly remodeled offices of Texas Gastroenterology Institute help to alleviate patients stress by ensuring that they always feel at ease and comfortable. Balderas, who attended medical school in Galveston and completed her more specialized training in Dallas, always planned on returning to the Rio Grande Valley to perform medicine.

Before returning home to the Valley, Balderas spent extra time learning advanced procedures such as endoscopic ultrasound and endoscopic retrograde cholangiopancreatography in San Antonio. She is the only fellowship-trained endoscopist who performs EUS & ERCP in all of Hidalgo County. Balderas felt that having learned how to perform these procedures would “be an added asset” when coming to an area of so few specialists.