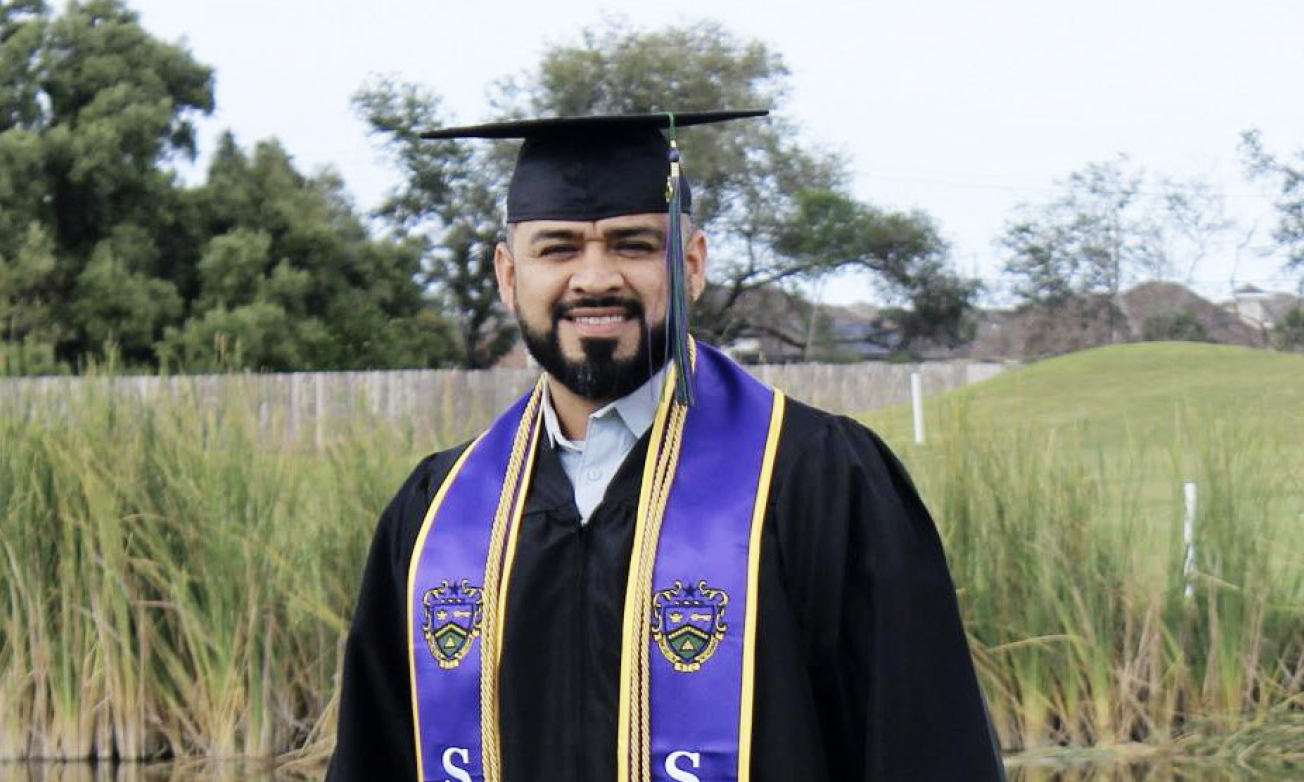 Between shifts at Walmart, where he worked as a cashier to relieve pressure on his hard-working single mother, a teenaged Nestor Espino set his sights on two long-term goals.

The first, earning a college degree, seemed like a necessity. The second, a career in law enforcement, seemed like destiny. And while he may have gotten the order wrong, he managed to make good on his plans last fall, earning his bachelor’s degree in organizational leadership — 13 years in the making — from South Texas College.

“I did the expedited, competency-based program — 11 full courses in a year,” said Espino, who accelerated his degree through STC’s Educational Pathways for Law Enforcement Professionals program. “I think I’m one of many that have proved the point: South Texas College makes it possible, makes it reachable.”

A veteran Border Patrol agent with three children of his own, Espino hopes his dedication will set a tone for college and career success in the same way his mother and grandmother did for him. And even as he makes plans to pursue a master’s degree in public administration at the University of Texas Rio Grande Valley in 2021, he’s quick to reflect on the anachronistic achievement of his “second” goal, likewise boosted by the dual influence of his mother and STC.

“I grew up crossing the border in Starr County, and I remember my mom told me when I grew up, she wished I could be in uniform,” said Espino, currently employed on the intelligence side of operations. “I’d see the guys in green … how dedicated they were. It looked prestigious.”

That reverence remained, and when faced with a chance to fulfill his mother’s prophecy, Espino decided to combine his high school-era goals.

“That’s when I switched to law enforcement,” he said, his heart set by then on a career with either Border Patrol or Texas DPS. Meanwhile, he had moved on from Walmart to work as a bank teller and T-Mobile sales representative.

It was an easy decision at the time: No more driving directly from the night shift to an 8 a.m. class, plus he’d be earning more to support his wife and family. But a full-time day job meant less time to commute to college, and with his mother’s ever-present advice echoing in his head, he made the decision — this time much more difficult — to leave STC and launch 100 percent of his efforts toward his career.

“My mom always would tell me: ‘Things are just going to be a little bit harder. Don’t give up, everything is possible,’” Espino said. “My kids were young — it was wise to take a break and focus on my career.”

Years later, his wife and children would return the favor, patiently supporting Espino as he pulled 50-hour weeks at work before isolating in his room “for hours studying and not coming out.” And just as they had cheered on the day he passed his Border Patrol agent’s exam, they were there to celebrate his STC graduation.

“A lot of this is possible because of my family,” Espino said. “They put everything in perspective.”

As a Roma High School graduate, Nestor recalls all those individuals who positively impacted his life. He credits his high school teachers, coaches, and administrators for always encouraging him to continue his education and aspire for more.

For his extended family at STC, Espino’s success is a shining example of the power of dedicated support. From flexible, competency-based programs to a student-first philosophy promoted by faculty and staff, STC provides a launching pad for working adults like Espino, offering support not unlike a surrogate household.

“It cannot go unmentioned that a strong family support system is always helpful,” said Maricruz Hinojosa, coordinator of College Connections at STC and an important component in Espino’s journey. “I know Nestor counts on the support of his mom, wife and kids, who are proud beyond measure.”

Hinojosa has seen stories like Espino’s before. A courageous, persistent person quitting college to be there for their family … before later invoking the very same grounds to return. “It’s ironic to think that the same reasons he stopped going to school years ago have now become the main motivation to continue and complete his degree,” she reflected.

For Espino, though, it was more of an issue of timing. Through a co-worker, he caught wind of the Educational Pathways for Law Enforcement Professionals program, which promised credits toward a degree for coursework he had already covered in basic academy. Suddenly, his original high school goal was not only “totally doable,” but, with hard work, less than a year from completion.

In addition, he says, he thrived under the encouragement and assistance of always-accessible faculty like Organizational Leadership Instructor Dr. Sandra Trevino and support staff like Hinojosa.

“STC gave me the opportunity,” Espino said. “Maricruz was the map. The guide for us to go and move forward … Dr. Trevino just made it understandable.

“South Texas College has all the tools, everything to offer.”

No doubt Espino’s freshly minted bachelor’s degree is a testament to his dedication and persistence. But it’s also a front-of-the-line pass to bigger opportunities in law enforcement. With a master’s degree, he says, he’ll open doors to supervisor positions, moving up the chain of command in Border Patrol or even beyond.

“It’s going to come back and connect with what I’m doing right now,” Espino said. “My degree will allow me to be more prepared.”

With average salaries climbing, and law enforcement careers slated to expand at a faster-than-average rate, Hinojosa says it’s an opportune time to set a foundation at STC. Espino’s Border Patrol Academy Training is one of seven educational pathways available for college credit at South Texas College — others include Criminal Investigation, Peace Officer Training, and Field Operations.

“Not only are they able to obtain college credits for their academies, but they are also able to complete their degrees 100 percent online,” Hinojosa said. “We are transfer-friendly and readily available to assist our students.”

Visit https://bt.southtexascollege.edu/law-enforcement/pathways.html for details and eligibility information for the Educational Pathways for Law Enforcement Professionals program. Have questions? Contact Maricruz Hinojosa at (956) 872-6749 or via email at mhinojosa@southtexascollege.edu.