Each plane that makes its landing at Gulf Aviation in Harlingen, in many ways serves as a small symbol of victory.  David Garza CEO of Gulf Aviation in Harlingen has overcome numerous obstacles in his quest to establish a successful independent fixed based operation. A David in the Goliath world of commercial aviation, Garza has accepted the challenges and created opportunity from it, today Garza’s main focus is on community youths, hoping to inspire and encourage a new generation of sky gazing dreamers.
Born to a large family of ten in Mercedes, Texas Garza lived a typical Valley childhood.   After graduating from high school he decided to pursue an education in Aviation Technology at TSTC in Waco, Texas.  “I knew out of high school that I enjoyed working on race cars and high performance engines, the idea of working on aircraft as a career seemed like the next logical step” he says.  Garza enrolled at Texas State Technical College in Waco where he made the decision to pursue a career in aviation technology. Upon graduating Garza found work at the Cessna Aircraft Dealer, Air Central, in Harlingen Garza remembers those years as “the good ole days.” Before the airlines were deregulated, airline flights were expensive, because of this many businessmen chose to own and fly their own private airplanes. Many businessmen had a pilot’s license and owned or leased their private aircraft.
It was during the late 70’s and early 80’s that aviation suffered a major economic blow that began with a dramatic increase in fuel prices in addition to the excessive frivolous lawsuits against aircraft manufactures “Most of the manufactures went out of business; it was the auto industry equivalent of losing Ford, Chrysler, and GM.  As a newly married man I was concerned, knowing that the dealers who I worked for were in jeopardy of going out of business. I felt my future would be better in my own hands.”  He explains. After having worked for the Harlingen airport a few years, Garza’s foresight and intuition lead him to start his own business – Garza Aircraft Service – hoping that independently he might survive the decline.  Two years later Mr. Garza’s predictions proved correct and the failure of the Cessna Dealership provided Mr. Garza the opportunity to purchase what remained of the FBO.
By the mid 1980’s, Gulf Aviation had established itself as a respectable FBO. Soon afterwards, the airport board sent word that all FBO’s and general aviation would be relocated from the west side of the airport to the east side, this change caused the FBO’s operating expense to rise considerably.   With the market continuing to decline, it was not long before normal competition turned into predatory competition, after just a few years the Young Flying Service and/or Harlingen Aero folded and Gulf Aviation remained standing.
Today, Gulf Aviation, Inc. is a full service fixed base operator with 35 employees providing aircraft & airline fueling, airline ground support services, air charter, flight training, aircraft rental, hangar and office rental, and aircraft parts and service.  . Widely regarded as one of the premier FBO’s of the Valley,   Gulf Aviation, Inc. services companies such as Southwest Airlines, Continental Airlines, Sun Country Airlines, Federal Express, DHL, Department of Defense, USDA, and most recently entered into a contract to provide hanger and office space to the US Army National Guard. With UPS recently relocating its operations from Harlingen to McAllen airport the company requested Gulf Aviation to relocate its ground support services to UPS’s new location at McAllen.
Excellent customer service by professional staff is what often sets Gulf Aviation apart, “We have an excellent team” Garza proclaims proudly. Training up those with a desire and interest to work in aviation, as well as military veterans with aviation experience has become an unexpected blessing as many of the employees have remained with the company for over a decade. Additionally, Southwest Airlines recently awarded Gulf Aviation “The Super Fueler” Award. This award is given to the FBO with the best on time performance. Gulf Aviation has received this prestige award from Southwest Airlines previously in 2005. The Fueler of the Year Award is a national ranking and recognition highly regarded. Garza’s own personal achievements have not gone unnoticed as well receiving several awards which include: High Plan Mechanical Achievement Award from TSTC, Businessman of the Year by the Small Business Administration LRGV District Office, Exemplary Employer Partner Award by Tech Prep of the Rio Grande Valley, and Person of Honor Award by Harlingen Hispanic Chamber of Commerce.
Today Garza remains strongly committed to local causes he recently served Chairman of the RGV Partnership and is a Director of the Cameron County Regional Mobility Authority. He has also served on the Board of Trustees of the Texas 4H Youth Development Foundation, Director of Texas State Technical College and Regents Circle, Chairman of the Advisory Board of the TSTC Aviation Maintenance Advisory Committee, Board of Directors for Harlingen Chamber of Commerce, and Chairman of the Cameron County EPC-Executive Board. 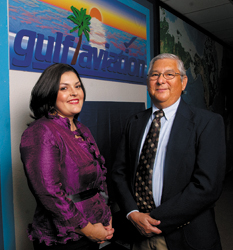 “I think that young people need to see Hispanics business owners that are successful. I want them to see that education pays off, effort pays off, and that being involved has rewards. They shouldn’t just give up because they’re told it can’t be done; I know that in my lifetime I’ve heard the word “no” many times, but that won’t stop me.” A lesson Garza has passed on to his own daughter Arlene who majored in business and is now poised to follow in her father’s footsteps.
Gulf Aviation, like so many others in the aviation industry has struggled in the recent U.S. economic recession. For Garza the experience was similar to déjà vu. “We applied many of the same principles that got us through those hard times in ‘79” Garza recalls.  The company threw all of its efforts into finding work in any segment of the aviation industry, in particular the ground support segment of commercial airlines.  In doing so, Garza was able to keep Gulf Aviation in business and save jobs.
As the mid-Valley region continues to develop Gulf Aviation continues to experience growth under the direction of Garza, and for the past 5 years with the assistance of his daughter Arlene. “With the Grace of God, this business will endure another 30 years under the next generation” explains Garza.
Today, Mr. Garza enjoys passing his time working on his cars, and attending car shows. Mr. Garza and his wife of 36 years, Elena, also enjoy spending time with their three grandchildren at their family ranch.