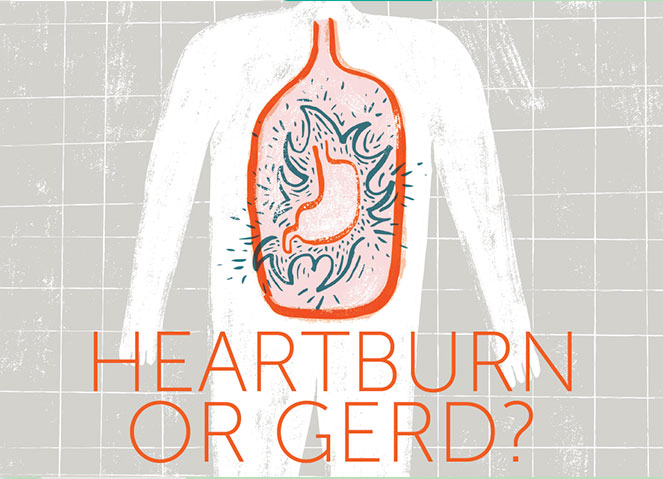 In the Rio Grande Valley, we love our salsas and picantes, and suffer joyfully through the burning feeling as we finish our meal. We’re not quite so happy when the acids make a second appearance, manifested as heartburn. Some heartburn is normal, such as after a meal or if it occurs less than once a week, and the discomfort can be relieved by over the counter antacids. However, heartburn that occurs more often, is severe, or occurs at night, could be a sign of a condition you don’t want to ignore. Gastroesophageal reflux disease, also known as GERD, is a very common disease in relation to the stomach and esophagus. According to Dr. Valeska Balderas of the Texas Gastroenterology Institute, it is very prevalent in the RGV.

GERD is characterized by tissue damage that results from repeated or prolonged exposure of the lining of the esophagus to contents from the stomach. Other symptoms of GERD include chronic acid reflux and heartburn, difficulty or pain when swallowing, excess of saliva, laryngitis, hoarseness, bad breath and belching. Dr. Balderas points out that in some cases individuals feel a burning or pain in the middle chest or upper abdomen and mistake it for heart-related chest pain. They go to the emergency room, where after evaluation, they are sent to a gastroenterologist.

There are multiple methods to test for and diagnose GERD. To conduct an esophagram, the patient swallows barium and a radiologist views the esophagus and stomach under fluoroscopy to see if there is a problem with narrowing or inflammation of the esophagus. An upper endoscopy allows doctors to visualize the esophagus, stomach and small intestine and to check for damage such as inflammation of the esophagus and ulcers. Other tests include esophageal manometry which measures esophageal function through pressure readings and a 24-hour pH probe in which a sensor measures acid exposure.

The first steps in treating GERD often lie in lifestyle changes. The high fat and spicy diet common in the Rio Grande Valley is a contributing factor in many resident’s symptoms. It is recommended that you avoid habits such as overeating, eating before bed and eating too quickly. It is also important to avoid eating heartburn-triggering foods such as chocolate, coffee, onions and acidic foods such as soft drinks, citrus and tomatoes. Fatty foods and spicy foods are also a trigger for heartburn and should also be limited.

Other options for treating GERD include over the counter and prescription medications. The purpose of the drugs range from your simple antacids (Maalox, Rolaids, Tum) to medication that reduce acid production (Pepcid AC, Zantac) and even medication that can heal the esophagus (Prevacid 24 HR, Prilosec).

Dr. Balderas is stressing the importance of managing these symptoms because untreated GERD Can develop into a more serious condition called Barrett’s esophagus which is diagnosed with an upper endoscopy. With direct visualization of the esophagus, the Doctors at TGI can detect this condition. It is recommended to have an upper endoscopy if you have had a long standing history of acid reflux and are over the age of 50 to screen for Barrett’s esophagus . Other indications for an upper endoscopy aside from a long history of GERD are alarm symptoms including dysphagia (difficulty swallowing), anemia or weight loss. Barrett’s esophagus occurs when the lining of the esophagus are damaged by exposure to acid from the stomach and is most often diagnosed in people who have long-term gastroesophageal reflux disease. In Barrett’s esophagus, normal tissue lining the esophagus changes to tissue that resembles the lining of the intestine, increasing the risk of developing esophageal adenocarcinoma, which is a serious, potentially fatal cancer of the esophagus. According to Dr. Balderas, treatment for the precancerous cells associated with Barrett’s esophagus can consist of Radiofrequency ablation which uses heat generated by radio waves to selectively destroy tissue. Although less invasive than other treatments, it may take more than one procedure and healing would take longer.

Diet and lifestyle changes are still the best and first response to controlling symptoms of GERD. “I always prefer these changes to control symptoms instead of having to take a medication for life,” says Dr. Balderas.

To learn more about the Texas Gastroenterology Institute, visit their website: www.digestivehealthpro.com.