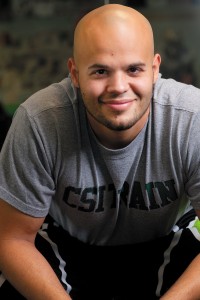 Bottomline, Jaime Cavazos produces results. About six years ago, the Mission native was finishing up his studies at the University of Texas-Pan American and like many, wondered what the future held in store. Cavazos played basketball for legendary Valley basketball coach Roy Garcia at Mission High until he graduated in 1999. He went on to study Exercise Physiology at UTPA and graduated with a Bachelor’s in Kinesiology in 2004. He continued and earned his Master’s in sports science in 2006 UTPA and UT Tele campus.
Today Cavazos dedicates his time and effort to training high school aged kids in order to help them achieve full potential and excel at the college level. Cavazos established and runs Cavazos Sports Institute (CSI) in McAllen and has helped over 300 kids in his six years as a certified trainer. “Our main focus at CSI it to help get kids into college,” Cavazos said. “There are a lot of kids out there that want to and can play at the next level. We’re preparing them physically and mentally here at CSI. We emphasize speed and power and we help them improve in those categories and prepare them to compete at the next level.”
Cavazos has been training kids for six year but he’s been doing it full time the last three. Currently, Cavazos trains his athletes in a 2,000-square foot facility in McAllen. But his success has led to CSI outgrowing that facility so Cavazos recently broke ground on a new and bigger facility. The new place, which should be ready early in 2012, is 7,000-square feet, with about 2,000-square feet worth of office space that he plans to lease out. The new place will also have a half court for basketball, showers, lockers and a straight away 75-yard track outside. 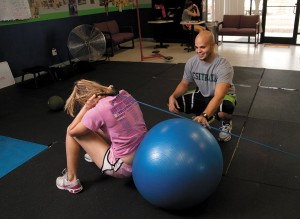 “I train more with space than machines,” Cavazos said. Cavazos hopes to open a CSI in Harlingen within the next five years. He’s certainly come a long way since his first athlete. Cavazos would train a kid named Esteban Cardenas using public gyms and weight rooms. At the time Cavazos was also teaching at UTPA and was the strength and conditioning coach for the Broncs.
“I didn’t like it,” Cavazos said about training student-athletes at UTPA. “Those athletes didn’t want to be there. The kids that come to me, want to work. So I took a chance and opened CSI.” Cavazos said that providing this type of service to Valley athletes would serve a greater purpose to the region instead of just one kid. “I didn’t have this in high school,” Cavazos said. “After learning about training and conditioning, it frustrated me to see San Antonio teams beating us all the time. I think (football) coach (Manny) Gomez at Harlingen is the best coach around right now. A lot of schools do the same workouts from Monday through Friday. If you do the same routine, you’re eventually going to plateau.”
Cavazos has trained 39 kids which have gone on to compete at the next level. Of those, 12 have gone on to compete at Division I colleges and universities.  “First of all you wanna get strong,” Cavazos said. “And to sum it up, we work on getting explosive. I think the vertical jump is the best test. The higher the vertical, no matter what sports, the better the athlete.”
Most of Cavazos’ athletes compete in volleyball, basketball, soccer and track. And he works on strength, power and endurance with all of them. Harlingen High hurdler Randy Bermea has been training at CSI for almost one year. Last year, Bermea won a silver medal in the 110-meter hurdles at the UIL State Track Meet in Austin and a bronze in the 300-meter hurdles. Bermea also set to longstanding Valley records running a 13.62 in the 110s and a 36.46 in the 300s. His previous best times were 14.1 in the 110s and 37.7 in the 300s.
“I did a lot of strength training at CSI,” Bermea said. “Without my training at CSI, I don’t do what I did last year. He (Cavazos) knows so much about training and he’s not going to baby you. It’s a great atmosphere over there. Everyone that goes there, goes there to get better. It’s great working out with people that also want to get better.”