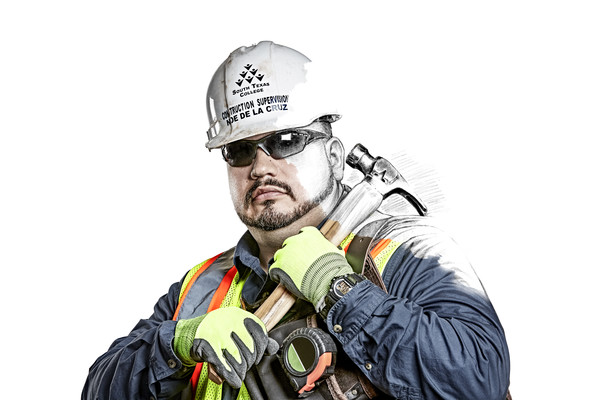 “There’s no place like home.” It’s been over 75 years since the debut of Judy Garland’s famous line in ‘The Wizard of Oz,’  yet the words still ring true today. For Noe De La Cruz, the phrase is more than a famous movie quote. It’s a lifelong dream.

As a child, Noe didn’t have a place to call home. He and his sisters were raised by their mother; despite working multiple jobs, Mrs. De La Cruz’s paychecks didn’t often cover family-of-four expenses. “We were never truly homeless — my mother made sure of that,” says Noe. “But we moved from one government housing apartment to the next for almost my entire childhood. The experience made me want a home of my own, and also to help others who didn’t have a permanent place to live, either.”

Today, Noe’s dreams are coming true. He’s a proud homeowner on his way toward a career in building homes for others. Noe recently enrolled in the Construction Supervision program at South Texas College, where he has excelled. “As a contractor, I’ll be able to build homes for those in my community. It will be my childhood dream come true, and STC is helping me make this happen.”

Like many of us, Noe took some detours on the path toward achieving his childhood ambition. Always more comfortable in the workplace than the classroom, Noe started work right after high school as the “push cart guy” at Wal-Mart. “My mom always told us, ‘whatever you are, be the best one,’ and I took that to heart,” Noe tells us. “I took pride in my work.” His hard work paid off — within four months at Wal-Mart, Noe had been promoted to assistant manager.

From there, he launched into a career in business. Noe’s spectacular work ethic and ability to perform under stress meant success in many fields, from car sales to management. “My father left when I was still a kid, and since my mom had to work all the time, I basically became the dad. I think that made me who I am today. I can deal with stress because I did it when I was young,” Noe recalls.

After several years in the business world, Noe began to wonder if his career choice was the right one. “I had been in car sales for a long time,” he says. “It was good money — I was able to support my wife, son, and daughter easily — but it made me feel kind of empty.” One afternoon, Noe opened up to his wife, an STC graduate herself, about the growing dissatisfaction he felt at work. “She said, ‘Well, why don’t you go back to school?’ I had never even thought about going back to school, but as soon as she said it, it made sense.”

While Noe was theoretically excited about returning to school, he had some reservations. “I didn’t know the first thing about enrolling,” he confesses. “I thought it would be a ton of paperwork. Now, I see that I was mistaken. At South Texas College, starting classes was simple and quick.”

Making college easy to attend is a hallmark of STC. In Noe’s case, they went above and beyond: “I went to visit the school and happened to stop by the Construction program booth at a student fair. The head of the department himself gave me his personal phone number, told me to call him anytime, and made sure all my enrollment procedures went smoothly. Within two days, I was ready to start classes. It was amazing.”

Noe’s time at STC continues to amaze him. “The professors are experienced and available. They bring in successful construction professionals as guest speakers. They give us hands-on opportunities to supervise construction, from building stages for campus events to homes for Habitat for Humanity.” Noe has also benefited from the extracurricular activities his program offers. He’s president of the Construction Supervision Association, a position that has allowed him to see and be seen in the Valley’s construction community.

By this time next year, Noe De La Cruz will be ready to start work as a home builder. He’s even got his company name ready to go — be on the lookout for De La Cruz Construction. “I never thought it would be this easy to make such a fulfilling career change,” he says. “Every time I build a Habitat house and imagine the family who will get to call it home, and I smile.”