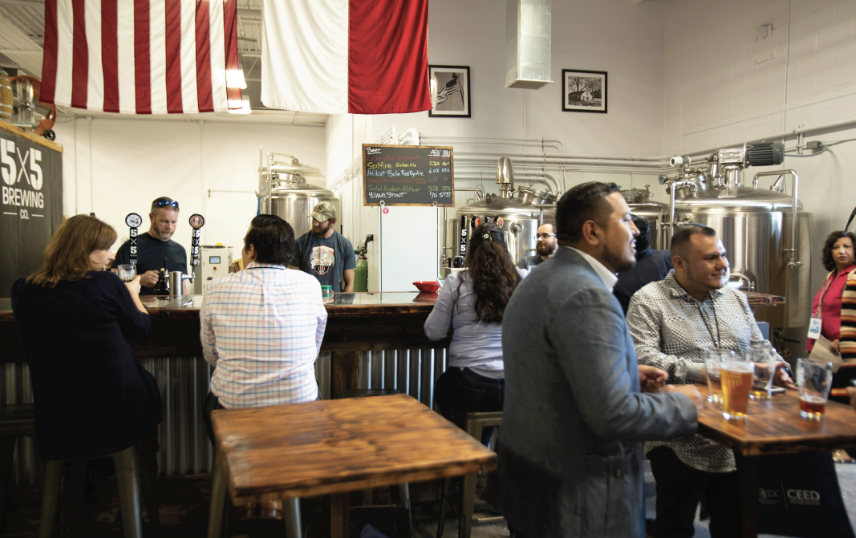 There’s something brewing at the Center for Education and Economic Development — the latest beers from 5×5 Brewing Co. The brewing company occupies part of the northwest portion of the CEED building.

“The name stands for a military term based in communications, used mainly through World War II meant to denote signal strength and signal quality for radio signals — one to five, five being the best, so 5×5,” said Sean Downey, brand manager. “It also became known as everybody’s okay or everything’s okay.”

Founders Matt Mazur, George Rice, and Downey all grew up in Mission. Along with longtime friend Matt Bowling, Mazur and Rice first dreamed of entering the craft beer world with a magazine. When that didn’t happen, they switched gears to a brewery — especially with Bowling’s homebrewing background. The trio brought Downey into the fold for his marketing and business chops.

When the group was looking for a place to set up shop, it made sense to give 5×5 its start in the same city that gave them theirs. They decided to speak with Alex Meade and Daniel Silva — the former and current CEOs of the Mission Economic Development Corporation, respectively — about potential properties in the city. Meade and Silva offered them a spot at the EDC-managed CEED building, a 55,000-square-foot coworking facility created to bolster entrepreneurship in Mission.

After getting the green light, the group of friends and Mission EDC had to figure out the feasibility of brewing beer in a coworking facility, contending with the operation’s sounds and smells. As it turned out, though, it was feasible. Very. The brewery opened its doors officially in July 2018.

“It was very, very a ‘stars aligning’ thing for us to find our way into the CEED,” Downey said. “It’s been great. The city and the EDC have put a lot of time and effort into helping us get up and operating.”

Mission EDC has been just as happy to have 5×5 as a business tenant. 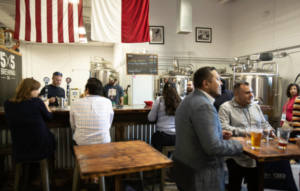 “We were excited to have 5×5 join the CEED building because we have a passion for fostering entrepreneurship and 5X5 has a great story,” Silva said. “They bring another exciting aspect to the building.”

5×5 showcases eight beers year round with military-themed names like Hellcat Belle Red Rye Ale, Moore Field Blonde, and FUBARR. Five more brews are currently in the works. The brewing company’s seasonal beer, ORDNANCE Chocolate Orange Stout, was named the official beer of Mission’s Texas Citrus Fiesta, held in January. For now, the taproom is open from 4 to 10 p.m. Thursdays and Fridays, and 2 to 10 p.m. Saturdays and Sundays. Every other Tuesday, Downey has hosted trivia night at 5×5, and different food trucks and live music are on regular rotation. The taproom isn’t the only place to try a taste — 5×5 is distributed at bars and restaurants across the Rio Grande Valley.

Many patrons at 5×5 Brewing Co. express curiosity about the facility it’s attached to.

“If we take them inside the CEED building, it’s kind of a totally different universe — I think it kind of blows their mind that something like us could live in an environment like this,” Downey said. “It is kind of fun to bring them in here, and then when they see what the CEED building is, they really get excited because a lot of these people also have their own small businesses or their own home businesses.”

Downey’s happily markets CEED membership, which is open to freelancers, entrepreneurs, and small businesses, among others, because of the benefits 5×5 has experienced there. 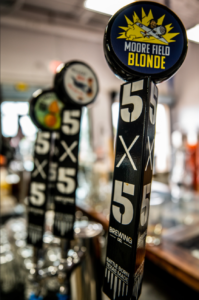 “It’s been great,” he said. “It’s interesting because one of the beers we did, our 40MM Stout — we’ve known the people over at Jitterz for a while. With their presence here in the CEED, it made a lot of sense to try to co-brand and co-market us where I could.”

“Everybody loves it and we even put out together some co-op mugs with both of our branding on it,” Downey said. “It’s been really well received. When people find out that there is actual coffee in our beer, they go, ‘oh wow.’ And we say, ‘and we have it locally roasted by Jitterz,’ they’re like, ‘oh my God, I love Jitterz.’”

It all goes back to an emphasis on supporting local businesses.

“If I can have those Mission companies and give them business, that’s what we’re all for,” Downey said.

5×5 has enjoyed its time at CEED, Downey says, but they may soon outgrow their space.

“We don’t plan to be here forever,” he said. “Our goal is to find a very much larger piece of land to build. So we plan to build in Mission because, again, we grew up here, the city has been great to us, and we want to make sure we keep the business here as much as we can.” 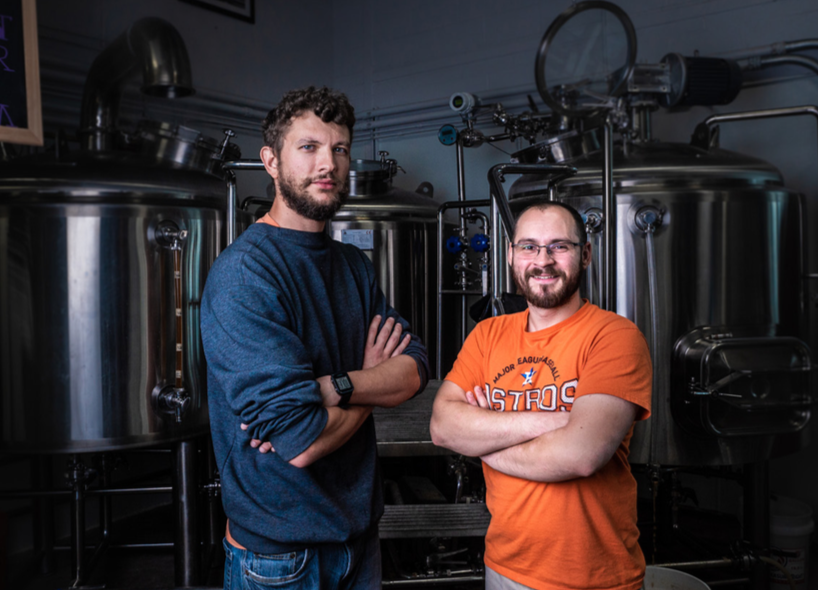 The plan was always for 5×5 to use the CEED building as a springboard, Mission EDC’s Silva says.

“We understood from day one that this was a launching site for 5X5,” he said. “Our goal was to help them start up and then have them move into a larger location here in Mission. The space can then be used to assist a new venture that can benefit from the assistance.”

To read more about 5×5 Brewing Company, visit 5x5brewing.com. To learn more about the Center for Education and Economic Development, including information about becoming a member, go to missionceed.org.