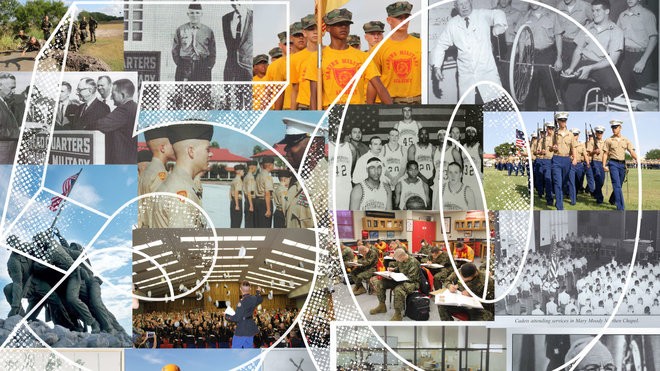 The Iwo Jima Monument towers over the Marine Military Academy parade grounds in Harlingen, an iconic symbol of one of the fiercest battles of World War II and the final resting place of a Rio Grande Valley Marine depicted in the sculpture and later killed during that battle.

Across Iwo Jima Boulevard is the main gate to the 142-acre MMA campus, where for 50 years teenagers have learned to become men through a rigorous academic regimen based in the U.S. Marine Corps values of honor, courage and commitment.

MMA Superintendent Col. R. Glenn Hill, whose association with the Marine Corps coincides with the half century that the academy celebrates this year, said MMA is the only military boarding school in the world to immerse cadets in those values as part of its curriculum.

Military discipline supports the school’s educational mission by creating an environment that integrates ethical, physical and spiritual training with academics all day, every day.

“We are a college preparatory school,” Hill said. “We focus on the academics and we work hard to provide quality of life.”

Hill joined the Marines in 1966, the same year as MMA’s first graduating class. After 30 years active duty Hill retired from the Marines and joined the academy staff, where he has remained for 20 years.

“I’ve had the honor of wearing this uniform for 50 years,” he said on a recent Friday morning in his office, dressed in fatigues.

With an almost unheard-of 100-percent rate of students accepted to college, and 98 percent actually attending a university or two-year college, MMA puts cadets on a track toward higher education from day one.

“One of the first people (a cadet) meets is a college counselor,” Hill said.

MMA is also a designated Naval Honor School, which means the academy can nominate its top cadets to U.S. service academies like the U.S. Naval Academy, where more than 400 MMA graduates have attended.

The cadets’ introduction to their service as a member of the Marine Corps JROTC program, and the discipline that comes with it, also begins immediately.

“What we do is take away the distractions,” Hill said. “There are no girls. Everyone wears the same clothes. It’s a regimented lifestyle. When you cut off their hair and put them in the same uniform they are just kids learning to work with one another.”

“We want to teach that you are rewarded for good performance and that there are consequences for poor performance,” Hill said. “We want them to make good decisions. We teach ethical behavior so they will do the right things in life.”

In the early 1960s Capt. William A. “Bill” Gary, an Arizona rancher and retired Marine Corps reservist, was looking for a school to enroll his son in that emphasized the ideology of the Marine Corps, but there wasn’t one. Gary enlisted a group of prominent marines to help him start such a school.

During the process the closing of the Harlingen Air Force Base gave the founders a place to land.

The field closed after the war, in 1946, only to be reactivated as Harlingen Air Force Base in 1952 during the Korean War. Military cutbacks resulted in the base’s closure in 1962 and its transition to civilian use, which today includes Valley International Airport.

Gary and his legion of supporters worked tirelessly to network, organize, plan and raise funds to achieve their goal of creating the nonprofit Marine Military Academy, a male-only college preparatory school steeped in the values of the Marine Corps.

Gary’s son was the first cadet to enroll in the initial class of 58 cadets that started in September 1965. Six of those cadets would comprise MMA’s first graduating class in 1966.

The early years of the academy also attracted a man who would become one of Harlingen’s best known and most influential residents.

Col. H. William “Bill” Card retired from the Marine Corps in 1968 after 29 years of active duty and moved to Harlingen as MMA’s Commandant of Cadets and Director of Development.

Card, who enlisted in the Marines in 1939 on his 17th birthday, was aboard the USS Pennsylvania when the Japanese attacked Pearl Harbor on Dec. 7, 1941, and saw combat throughout the Pacific Theater, including the invasion of Iwo Jima.

Card left MMA in 1975 to pursue a career in banking and served as mayor of Harlingen from 1987 to 1998, although he continued his service to MMA as a trustee for many years.

When he moved to Harlingen, Card brought his family with him. This included son H. William Card III, who would become one of the academy’s early graduates.

The younger Card enrolled as a 16-year-old in 1968 and graduated in 1970. Despite growing up as the son of a Marine, the academy was an eye-opening experience.

“As any 16-year-old can attest to, you have your own ideas of how things should be,” Card said. “I was quickly dissuaded of all of that upon my arrival.”

He said his time at MMA helped him get his feet on the ground to prepare for the rest of his life. “I needed to pick myself up by my own bootstraps and find my own way,” he said. “For that I’m eternally grateful.”

The younger Card also served with his father on the board of trustees and has watched the school grow and influence new generations of young people.

Card went on to study at the University of Texas at Austin, returning to the Valley for a career in finance. In 1991 he and his mother founded Card Investment Group, which continues today as a successful firm of financial advisers.

While a few of the original military base buildings are still in use, MMA has undergone major capital improvements that include barracks, classroom buildings and recreational facilities. As a nonprofit, the school is funded exclusively through tuition and donations, Hill said.

For the 50th anniversary, tuition and fees for the 2015-16 school year amount to $35,300, which Hill said puts MMA in the mid-range for private military schools. The school also offers scholarships and financial aid to make MMA accessible to a diverse student body.

This year the academy has 265 cadets enrolled from throughout the United States and around the world, from as close at Mexico and as far away as China and Nigeria.

Jorge Ramirez arrived at MMA from his native Mexico to find a world that would have a profound impact on his life.

“I can tell you that the school gave me the building blocks for the rest of my life,” Ramirez said. “It put me in a situation that most 14-year-olds don’t experience. It’s learning from all these former Marines and being immersed in the Marine Corps culture that really sets it apart.”

After graduating in 1995, Ramirez returned to Mexico and became a lawyer. Then he returned to the United States and law school at the University of Florida, where he drew on his MMA experience to succeed.

“I was a kid in a strange land,” he said. “I was only 22 years old. I struggled but I applied all that discipline and I did very well. Things like honesty and integrity that were required from me at the school were so helpful. I’ve learned that through hard work and discipline you can work your way through anything that life throws at you.”

Ramirez became a U.S. citizen and now resides in Mission, where he is preparing to take the Texas Bar Exam.

The 50-year history of MMA, its culture and values are symbolically embodied in the giant sculpture across the street from the campus.

It is the original plaster mold used to cast the bronze monument that is the centerpiece of the Marine Corps War Memorial in Arlington National Cemetery. The artist donated the monument to MMA and it was dedicated on April 16, 1982.

The figures stand 32 feet high and include Marine Cpl. Harlon H. Block of Weslaco, who is shown placing the 78-foot flagpole in the ground. Block was killed in action three days later. His remains were moved to a gravesite directly behind the monument.

Close to the monument, in one of the original buildings, is the Iwo Jima Museum, administered by MMA and dedicated to preserving the history of that important battle.

Hill said the monument is a source of pride for the academy and the community of Harlingen.

“Having Harlon Block buried here is a big deal,” he said. “We feel very honored to have him here.”