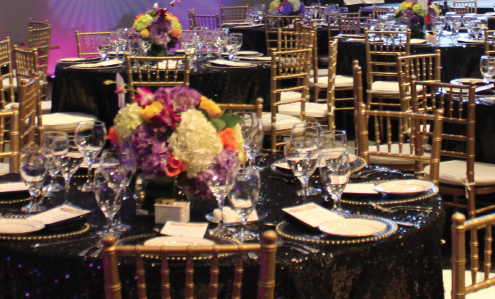 Don’t miss the black tie event of the year! McAllen’s International Museum of Arts & Science (IMAS) will again host its annual fundraiser to benefit the museum Saturday, Sept. 24. Now in its 38th year, Collage is one of the longest running fundraisers in the Valley, according to IMAS Chairman Laura Warren.

“We don’t hold back on making sure that everyone who attends feel appreciated,” said Warren.

“We’re embracing science at this event and celebrating our former board members who have helped us in doing that for years.”

The latest Collage will honor Dr. John Gerling, Mr. Arthur Hughes and Mr. Bill Ranganath. All three have volunteered for IMAS as chairmen and played a role in increasing public interest in the fields of Science, Technology, Engineering and Mathematics (STEM). Along with their expertise, they have also generously donated funds, artwork, and artifacts to the museum.

“Great things have happened under the leadership of all those three. Because of them, the community has benefited from people going into the museum and seeing the variety of exhibits we offer,” Warren said. “We’d like to continue that, and Collage helps us afford it; our upcoming exhibitions are brought in with money raised by Collage.”

Carlos Melguizo, IMAS vice-chairman, echoed Warren’s comments on how Collage benefits the museum. “We use the money raised by Collage to support IMAS,” he explained. “I have been a fan of Collage for more than 20 years and I’ve seen how it’s grown and how people are exposed to new things. It’s something that we’d like to encourage more of.”

At Collage, which Melguizo hails as the black tie event of the Valley, attendees are greeted with a formal dinner at IMAS with a menu prepared by famed local chef Larry Delgado of McAllen fine eateries House. Wine & Bistro and SALT-New American Table. Following the dinner, attendees can tour the museum after hours, attend a live auction and are even treated to an after party with drinks and entertainment provided by a live DJ. The atmosphere provided by the event lets attendees feel like they’re at a red carpet event, according to Melguizo.

For Warren, the goal of the museum is to provide exhibits and attractions not normally seen by the public, and Collage plays a role in meeting those expectations. One of these exhibitions is Xtreme Bugs, an exhibition planned from October 2016 to March 2017 filled with giant, animatronic creepy-crawlies so attendees can learn about insects.

“Our community deserves to have these kind of attractions and it takes money to afford things like that,” she said. “Where else but at Collage can you see so many people caring about the community and helping make a change for them?”

Ticket prices are $150 for IMAS members and $175 for non museum members. More information on Collage can be found at theimasonline.org.