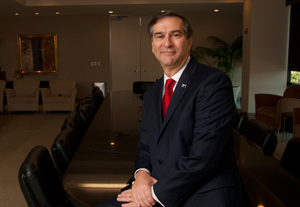 In January of 2011, Inter National Bank welcomed its newest leader, Mr. Sam Munafo as President and CEO of Inter National Bank.  With nearly forty years of experience to his name, Mr. Munafo looks forward to maintaining the INB standard of service in its international community.

Born in Cincinnati, Ohio, Munafo was raised in the small community of Liberty Township, Ohio. Growing up in a Midwestern dairy farm meant Munafo understood the meaning of hard work at an early age. “Early to rise, early to bed”, that was the philosophy that governed Munafo’s day to day life. While most young people struggle to find themselves, Munafo became influenced by the world of business at a young age, “during my early years of high school, while taking a business class, I developed a strong interest in the finance industry” he explains.

Upon graduation from high school, Munafo enrolled at Miami University in Oxford, Ohio where he earned a Bachelor’s of Science Degree in Accounting.  After graduating from Miami University, Munafo attended the ABA Commercial Lending School in Oklahoma City before enrolling in the Graduate School of Banking at the University of Wisconsin-Madison.  For students looking to pursue a career in finance, Munafo believes one of the best assets is the business community itself. “Starting out with a mentor will help increase your ability to be successful.  They not only give up their personal time but also have the experience” he adds.  Building up confidence is a key component to not only the learning process but to an industry that demands risk, a confidence that Munafo insists must come from both a mentoring relationship and oneself.  This philosophy aids him even now as Munafo navigates the sometimes turbulent waters of the US economy, “business elders who went through the past downturns in the economy can usually tell you what areas will need the most attention”.

In 1972 Munafo kick started his career by participating in a management training program before going on to become a commercial lender.  Twelve years later he accepted his first President/CEO position. Munafo’s latest position was as Executive Vice President /Chief Commercial Banking Officer for First Financial Bank Corp in Los Angeles.  While moving to the Rio Grande Valley must require some level of cultural adjustment, its location was one of the strongest motivating factors. “The Rio Grande Valley is a really great place to live and work, people take time to laugh and enjoy the beautiful weather.”

Munafo enjoys having the opportunity to serve the community through various organizations, “part of leadership is helping in the community at all levels, both the economy and people”.

While in Ohio Munafo served as Chairman of the Board for the Hamilton Chamber of Commerce as well as the Advisory Board for the Miami University School of Business.  Over the years he’s continued to serve actively as member of the Board of Directors of the Rotary Club, Chamber of Commerce, Kiwanis Club, Hospice, United Way, local hospitals and various other community organizations.

“We at INB would like to be part of the leadership in McAllen and supporting counties to be the best, my door is always open, I have an open door policy for both staff and customers. We believe in one team one bank one company” says Munafo. INB’s corporate office is located on McAllen’s South 2nd street, just a few miles away from the international border and its parent company, Banorte, the third largest bank in Mexico. “The U.S. and Mexico border gives the Rio Grande Valley a uniqueness few banks in the USA have today, our future opportunities are endless.”  Founded in 1985, INB has experienced undeniable success and growth (now with locations all along the Texas-Mexico border) in a relatively short period of time.  Its merger with Banorte in 2006 has not only given INB valuable insight from a bank that has been in operation for over a century, but also the opportunity to expand its services to customers and fulfilling INB’s mission of providing customers on both sides of the border with a “wide range of world-class, innovative financial products and services” – with the goal of exceeding consumer expectations.

Noting that federal politics often plays a crucial role in the country’s economic development, Munafo insists this trend toward high regulation will only continue to increase over time. Despite increasing regulation, and a sometimes volatile market Munafo is optimistic that the RGV’s financial infrastructure will not only remain intact but grow stronger. “There is no question that the Rio Grande Valley will continue to shape the positive future destiny of the region.”