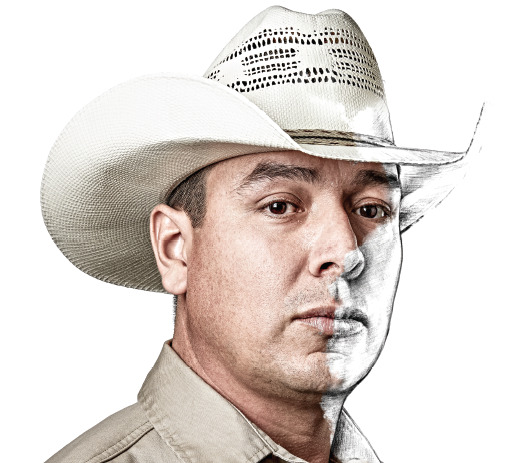 “Courtesy, Service, Protection” is the motto of the Texas Department of Public Safety, but Israel Reyes, a Criminal Justice major at South Texas College, embodies these ideals on a daily basis both as a student an

“Courtesy, Service, Protection” is the motto of the Texas Department of Public Safety, but Israel Reyes, a criminal justice major at South Texas College, embodies these ideals on a daily basis both as a student and as a parent. As Reyes’ plans culminate in his expected graduation this December, he is quickly coming one step closer to his long-term aspiration of one day to upholding the DPS motto he already embodies in a new role as a Texas state trooper.

Becoming a Texas state trooper has been Reyes’s dream since childhood, but his first attempt to gain the required education, back in 1998 at the University of Texas – Pan American, “didn’t pan out.” Fresh out of high school, Reyes attempted to work just long enough to pay for college, but soon “life happened” and the obstacles to achieving the first-generation college student’s dream became overwhelming. Nevertheless, Reyes, a hard worker, never gave up. As adulthood unfolded, he worked for 10 years in construction as an iron worker, plus an additional year as a truck driver. Still, the inner calling to serve others as a law enforcement officer never receded in Reyes’ mind, and in time he obtained a “stepping stone” job in law enforcement as a detention officer with the Hidalgo County Sheriff’s Department. Even in this intermediate step toward his long-term goal, Reyes was already demonstrating the DPS motto’s first ideal of courtesy: as a detention officer, says Reyes, he learned to work with inmates “as people.”

The stepping-stone job at the sheriff’s office was more than a career move; it was also a pit stop on the way to an advanced education. Reyes soon enrolled in the criminal justice program at South Texas College. Although the pressures of school and fatherhood eventually forced him to leave his job at the sheriff’s office in order to complete his education, Reyes did not halt in his pursuit of his long-term goals. He continued to show resilience and dedication in his twin roles as a full-time student and a father of five children. Mr. Reyes has one semester of study left before applying to become a state trooper, but he has already achieved the goal of being a role model for his children.

As a father, Reyes is living the DPS motto’s additional themes of service and protection. Even as he prepares for a life of service, Reyes is determined to protect his children from the influences that kept their father, a first-generation college student, from succeeding in college a decade – and – a half ago. Right out of high school, Reyes was unprepared for the challenge. Now on his second chance at college, Mr. Reyes is determined to persevere so that his children can say, “Look at what my dad does.” The student-lawman’s strategy is working: Reyes’ school-age children think it is “awesome” that their father is a student with homework of his own.

Nor will Reyes’ impact be limited to his children. He plans to become a state trooper in order to preserve “the safety of the people, of the public,” Reyes says. That is what they are: The Department of Public Safety. So, they are labeled as ‘bad guys,’ or ‘that guy who gave me a ticket because my kid wasn’t buckled,’ but they don’t see it as ‘Well, that kid could have had his life saved’” after a routine traffic stop. For Reyes, the guiding lights of law enforcement career will be “integrity and honesty.”

At 35 years old, Reyes brings a wealth of experience to the classroom. Asked for advice for his younger classroom comrades, Reyes notes that while his classes are online, “they are not handing out grades” at STC. It takes dedication to balance one’s busy life with rigorous academics. “You have to be disciplined” is the key mantra of the online student. In spite of the challenges, Reyes advises prospective students that college is well “worth the effort.” Students can start by researching college and finding out what they want out of life. Reyes’ challenge for high school seniors rings out loud and clear: “If someone doesn’t know what they want, look into it!”