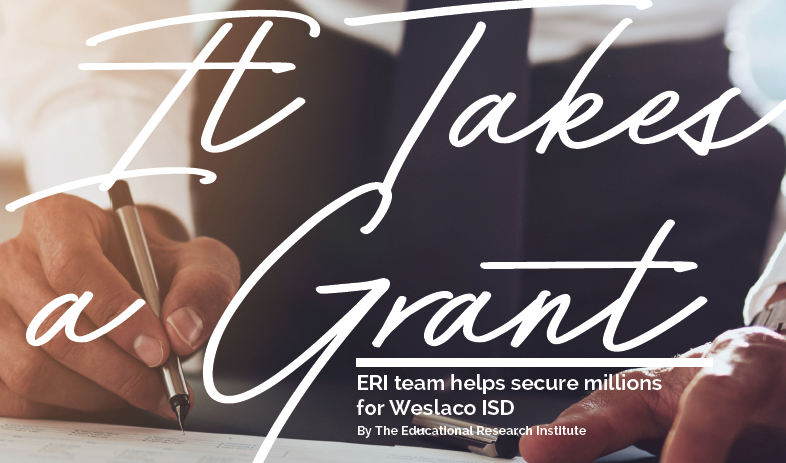 Weslaco ISD, which encompasses 54 square miles and is bordered by the cities of Progreso, Donna, Mercedes, and Edcouch, and Elsa, will be able to increase their number of employees and district resources, bolstering them in their race for success. Weslaco ISD is glad that with the help of the Jobs and Education for Texas award ($135,000), they will be able to support the Career and Technology Program with equipment. With over $8,277,442 awarded from the 21st Century Community Learning Centers (21st CCLC), WISD will be able to support an afterschool program. In addition, funding from the High Quality Pre-Kindergarten grant ($669,522) will help Pre-K students in preparation for their early education.

Educational Research Institute is proud to have helped Weslaco ISD secure these recently awarded grants, and like the Weslaco ISD superintendent and employees, are eager to see the impact these funds will have on their district.

To learn more about how grant writers at the Educational Research Institute can help your school district or non-profit organization find funding, visit www.erigrants.com.

A Weslaco ISD Timeline of Success

In the beginning, Weslaco city officials organized an independent school district soon after the city’s establishment in 1919. Starting with a small school located on the corner of Illinois and Seventh Street with an enrollment of only 350 in its 1921-22 first school year, the district had a faculty of 10 and a graduating class of nine students. The first official school building, which still stands on the corner on Illinois and Seventh Street, was completed in February 1922. A new expanded building brought comfort to the faculty and students of the later years.

Weslaco ISD has grown to include a student population of over 19,000 which are serviced at four high schools, 4 middle schools, and 11 elementary schools. Because of Weslaco ISD’s overreaching goals and expectations, students are able to enjoy a district that offers the following distinctions:

1996 to current – Weslaco ISD was given a rating of “Recognized School District” by the Texas Education Agency (TEA) for 14 out of 16 years. This was due to the outstanding student scores in the Texas Assessment of Knowledge and Skills (TAKS) state exam.

A new State of Texas Assessments of Academic Readiness (STAAR) test was introduced in the 2012-13 school year, replacing TAKS.

Weslaco ISD met the challenge of this new rigorous state exam, receiving the “Met Standard” distinction in 2014 and 2015.

The district’s operating budget is $182 million with approximately 2,000 employees.