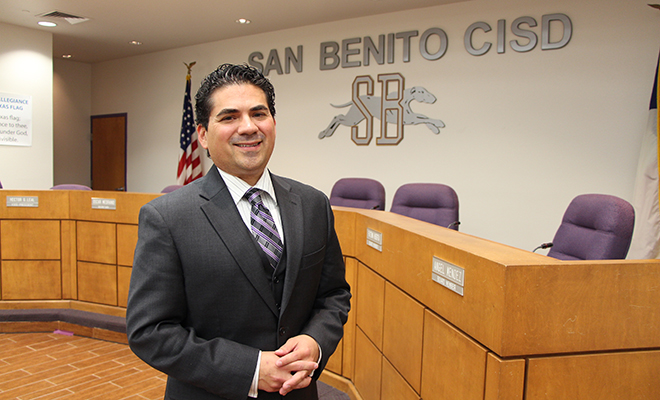 When it comes finding the right formula for success at San Benito ISD, we are our own worst enemy, according to the district’s new superintendent Dr. Marc A Puig.

What is the key to that formula? It amounts to unleashing the talent and intelligence of staff in the district, and that is only achieved by working together, Puig said.  “People make San Benito CISD successful,” Puig said. “The people are amazing. Our focus, and one of the biggest challenges is making sure we are all working together as a team. I have seen the enemy, and it’s us. We are our own worst enemy. We have to look inward, and look at what we have and celebrate and promote the great things we have here.”

Leadership has been a key issue in San Benito over the last few years.

Former superintendent of schools Antonio G. Limon served as the district’s leader fro 2004 until May of 2013, when he was placed on paid administrative leave following an internal investigation. That investigation closed last year, and Limon was reinstated on an interim basis until the next superintendent was hired.

With Limon on leave, the district paid interim superintendent Dr. Alfonso Obregon $91,000 for his work from May 2013 to November 2013. He was followed by Dr. Ismael Cantu who earned $51,000 during his tenure as interim superintendent from Dec 2013 to June 2014.
The district continued to pay Limon while he was on leave. He received $179,000 during his absence. In total, the district paid three superintendents $321,000 in a span of about 13 months.
Limón was reinstated May of 2014 and went back to work June 5, 2014. However, a condition for Limón’s return included a search for his replacement. Puig emerged as Limon’s best-suited replacement by the district.

Puig’s resume is extensive, having been a teacher, assistant principal, principal, assistant superintendent. After his duties as the superintendent of schools at Culberson County-Allamoore ISD in Vanhorn near El Paso , Puig began his duties for SBCISD on Jan. 5, 2015. His contract is for three years and 177 days, ending on June 30, 2018. Key points of his contract include a starting salary of $140,000. That salary will increase by $5,000 during each of the first two years, and $10,000 the third year.

“I’m proud to serve here,” he said. “I’m humbled by this opportunity, and I can’t wait to touch the lives of every child through the team in this district. It will be a tremendous challenge but there’s nothing to be gained in playing small.”

According to the 2010 Census, only 14.9 percent of Cameron County residents over the age of 25 held undergraduate degrees. Puig said he intends to not only see his students succeed at the secondary level, but go on to pursue higher education.

“I’m a schoolteacher. I’m on special assignment as superintendent but I’m a schoolteacher first and I love my special assignment,” said Puig. “Going the extra mile is what it’s going to take to get us to where we need to be. First and foremost, we are servants. The trustees are servants. The clients that we serve are the children. We work for children,” Puig remarked.

With his hiring, Puig said the students at San Benito have a mentor and friend. With 19 schools and approximately 11,300 students, he acknowledges his task is an arduous one.

One challenge Puig said he intends to meet head on is the issue of proper pay for his employees. Last year, the San Benito school district was subject to a lawsuit by its police officers who claim they were improperly paid for overtime in addition to other numerous workplace violations. At Puig’s State of the District Address held on Jan. 19, 2015, he referred to a similar challenge at his previous school district. The staff and teachers were underpaid when he first started but Puig stated that by the end of his third year, the teachers at Culberson had a 15 percent salary increase.

“We want to work together to create a premier district; not only to be a flagship of the Rio Grande] Valley but to be recognized statewide and nationally,” Puig said. “We do that by creating tremendous programs of which we already have in place; everything from automotive to cosmetology, trades, robotics, and we have a surprise coming up that I’m working on. It will be unique to the Valley but I won’t tell that now, it’s a big idea so we’ll see how that goes.”