Eli Ochoa, PE, AIA and Manuel Hinojosa, FAIA can look back at a combined nearly 80 years in architecture, punctuated by the success story of their firm, McAllen-based ERO Architects and driven in part by the ‘yin and yang’ philosophy they implement into the business.

Despite the numerous accolades, their most recent being recognized by the U.S. Small Business Administration Lower Rio Grande Valley District as “Small Business Person of the Year” for 2012, success has often been difficult to put into words, according to Ochoa, who is ERO’s founder, and current President and CEO.

Ochoa and Hinojosa, have a long history. Ochoa was just a young boy looking up to Mission High School football player Hinojosa. The longtime confidants attribute much of their success to their staff, who have shaped the firm into a tight knit group of professionals dedicated to producing quality work.

“We realize that it takes the right people around us to make things happen. I think that has been our success story,” Ochoa says. “Because of that balance we are able to come back and have a vision on what it was going to take to create this organization in order to uphold the philosophies that we had established.”

At ERO, respecting the land, people and history comprise the three basic tenets that are considered before pencil even touches paper. Those elements form a culture that drives how they approach the design of a particular project, whether it’s on the border or anywhere else in Texas, says Hinojosa, the firms chief design officer.

“It’s an attempt to bring out the history of a particular location, and in the end it’s an attempt to connect to the people through their respect of that history,” he said.  “There is a very unique history on both sides of the border. It has been here for a very long time. It has provided a lot of examples probably not found anywhere else. We respect that. We understand it.”

The firm is guided by an apparent polar opposite philosophy by Ochoa, who is a structural engineer and an architect contributing technical expertise to the business, and Hinojosa, who is a Fellow Architect, the highest achievement in the industry, who also has a deep appreciation for art and history, especially borderland heritage.

“I think when you talk about a yin and yang, that’s about as yin and yang as you can get,” Ochoa said, briefly referring to the ancient Chinese philosophy that describes how polar opposites are interconnected and interdependent upon each other. 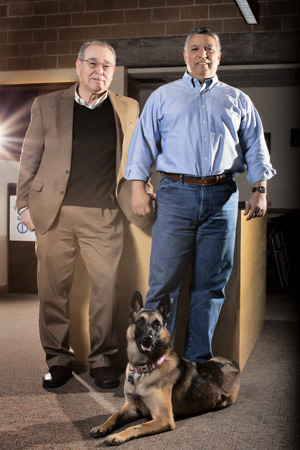 “Most firms, I would say, probably don’t have the two. They either lean very heavily towards the artistic side or the technical side. I think that’s one thing that kind of sets us apart,” Ochoa said. “We do have that synergy that is created by having two leaders of a firm come from two completely different points of view, and yet we pull them together.”

ERO specializes in designing educational facilities in such a way that focuses on optimum learning. The “psychology of learning” entails that students perform much better in environments they feel good in, something Ochoa describes as “teaching under a tree versus teaching in a cave.”

Prime examples include the design of Grulla Elementary in Starr County. Historically located along the route that the Spanish Escandon Expedition took in the early 1750’s as they crossed the Rio Grande to spread Catholicism to the North, ERO designed the plan of the facility in the shape of a cross to emphasize the region’s history.

The school’s two-story Learning Resource Center and the Cafetorium overlook the historical community, which is located along the banks of the Rio Grande. Further, the campus is built into a hill, and creates a “hierarchical procession” to further emphasize the procession of a historical church community.

“It varies from one end of the Valley to the other. It changes. There are different ages involved. So you see the evolution, especially of the architecture,” Hinojosa said. “A lot of it is lost. A lot of it is in ruins, but a lot of the history is there. The people also change. A sense of pride and identity is reflected in our buildings.”

Ochoa, a former school board member, says his capabilities derive from a passion for education.

“The feeling that we have to do our part to make sure we prepare the students for the workforce, for higher education, prepare them to be part of society…we feel very strongly that architecture can play a real vital role in the success of students,” Ochoa said.

“The idea of just building a box and putting a door and then putting students in it to teach them is very near sighted. You have to really understand what that box is,” Ochoa said. “The colors, the textures, the lighting from windows, and how students move around in campuses. All of those are real critical to them being successful in school. So, just designing the box isn’t good enough. That has been our cause. That has been our mission. It’s design those schools that are going to help students be successful. I drive it from one point of view, Manuel drives it from the other. That’s another one of the reasons we have had so much success.”

Hinojosa, says he draws upon his experience as a former city manager for San Benito and Port Isabel, which gives him a unique perspective on city development and planning issues. His management and design experience range from museums and schools to urban renewal efforts and more schools.

ERO Architects has been working on two very big civic projects. In October 2011, the firm was selected by the McAllen City Commission to design the new McAllen Performing Arts Center. The project is estimated at $40 million and will be built south east of the existing McAllen Convention Center.

Just this spring, the firm completed the Master Plan for a new Hidalgo County Courthouse. The firm’s tri-philosophy of land, people and history is a perfect match as the courthouse square has so much history dating back to 1908 to the founders of Edinburg.

“Eli has done a great job at taking a lead in our projects to ensure that we are always in the forefront of the industry,” Hinojosa said.

Ochoa added, “It is great to have the balance that Manuel and I have and his creativity and emphasis in design works perfectly with me and together we have created a firm that works hard to complete buildings that generations to come will appreciate.”