Jason Duke, Texas Game Warden: All in a Day’s Work 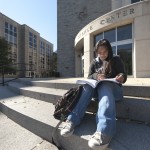 In an area that welcomes hunting season as naturally as winter, spring, summer, and fall, a specialized group of law enforcement officers gear up for what is sure to be not just another day at the office.  Jason Duke spends his workdays in a hub for outdoorsmen with good hunting, fishing, and a little bit of everything in between here in South Texas.  He took his love for those activities and his family background and combined them with the right education to create a career that many a man envies.  He is a Texas Game Warden. 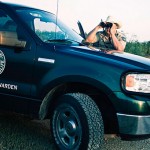 Duke graduated from Texas A & M University with a bachelor’s degree in Wildlife and Fisheries Science in December of 2002.  He spent the summer between his junior and senior years participating in an internship with the wildlife division of the Texas Parks and Wildlife Department.  During a seminar that followed, he was able to hear from students who had completed their internships with the law enforcement division of Parks and Wildlife, and their stories sounded much more desirable.  At his next opportunity, he pursued that internship as well.  Upon graduation from A & M, he was selected to enter the Game Warden Academy, and he began in January of 2003. 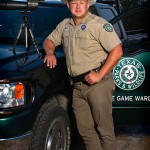 After an intensive six-month schooling that covers everything from Parks and Wildlife code and firearms training to traffic code and swift water rescue, graduates are assigned to their duty stations.  Their posts are determined by which counties in the state have openings and a “wish list,” on which they provide their top three preferences for county placement.  Duke was fortunate enough to receive his number one pick: Kenedy County.  Kenedy County is that vast expanse flanking Highway 77 that most in the Valley commonly refers to as “the King Ranch.”  In actuality, the county, which stretches from roughly 8.5 miles north of Raymondville northward to Los Olmos Creek near Sarita, is comprised of several ranches.  Some of these include the Kenedy Ranch with approximately 450,000 acres, the Norias Division of the King Ranch with over 200,000 acres, the Armstrong Ranch of 50,000 acres, and the Santa Rosa Ranch with 30,000 acres.  And Duke and his partner, Matt Strauss, are responsible for patrolling them all.

Kenedy County is distinct in that amid this rich ranching legacy, it is a Mecca for anglers as well.  Half of Baffin Bay lies within the county, as well as large portions of the upper and lower Laguna Madre.  Along with its diversity, the county still possesses a somewhat untamed quality, being home to only about 450 permanent residents, and “a place where you can’t buy a gallon of milk or a gallon of gas,” according to Duke.

It is in this truly unique setting where Duke carries out the game warden’s responsibility of protecting and conserving the natural resources of the State of Texas.  And yet, a game warden’s job goes beyond what the average person may expect.  Yes, they enforce wildlife laws and regulations and promote safety in hunting and fishing in the fields and on the water.  They provide hunters’ education courses and put on youth programs and hunts as part of their community outreach and focus on education with parents and kids alike.  As a state peace officer, however, they can also enforce traffic laws and often serve as backup for other law enforcement agencies, especially in rural areas that are so prevalent here in the Valley.  They are additionally involved in natural disaster response and were active in dispersing food and supplies after the Valley’s encounter with Hurricane Dolly in 2008.  Furthermore, they play a large role in rescue operations, and in his 8 years in the field, Duke has had firsthand experience with everything from airplane and automobile accidents to heart attacks and drownings.  Game wardens are one of the few law enforcement agencies that have the capabilities to deal with water related issues, and they also participate in drug interdiction and homeland security missions.

And every now and then, something particularly out of the ordinary comes along.  For Duke, his local claim to fame is being the warden who wrote the warning for Vice President Dick Cheney in February of 2006 after a hunting accident in Kenedy County.  Consequently, the warning was only for not having an Upland Game Bird Stamp, because the investigation revealed the situation was indeed an accident, and no one was at fault.  During that time, the tiny town of Sarita was inundated with news media, and Kenedy County got more than their fifteen minutes of fame. 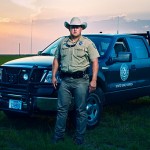 Looking to the present, when asked about his outlook and projections for the 2011-2012 season, Duke estimates that there will be very few changes to the regulations currently in place.  For the deer crop, he feels there were just enough spring rains to bump along antler development, and range conditions will make hunting easier, because deer will come to bait.  Though the drought has been hard on the deer population, hunters can still expect average or better antlers this fall and winter.  Duke expects a good crop of quail in Kenedy County in particular and an above average duck season overall.  Ideal nesting conditions up north have created a boom in the duck population, and anywhere that has water will attract ducks.

This game warden also has some tips for outdoor enthusiasts.  The first one is simply “get your license.”  To clarify, anyone hunting is required to obtain a hunting license, and if you are over the age of 17, you will also need to receive your hunters’ safety certificate.  A fishing license is required unless you are under the age of 17 or were born prior to January 1, 1931.  Be sure and check the regulations concerning other applicable stamps and endorsements required for your outdoor activity.  The second tip is “educate yourself.”  The Outdoor Annual, the department’s rules and regulations guide, is free anywhere that licenses are sold.  He adds that being abreast of how to keep yourself and others safe at all times while participating in outdoor sports is truly priceless.  Lastly, “get outdoors and enjoy it with your family.”  Opportunities abound for quality time to be spent and memories to be made. 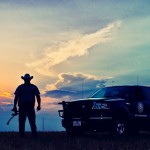 Jason Duke grew up in Conroe and was raised hunting and fishing with his family.  Having a strong relationship with his parents, his father passed on a love of the outdoors to him, and Jason intends to pass it on to his next generation.  He and his wife, Kandice, have two little girls, Madelyn and Haleigh.  And one day, they will tromp out in a field behind their dad and reel in a fish on the bow of a boat with him looking on.  And they will each learn to love and respect the land, the water, and the wildlife because of what was modeled for them.  I feel this was best summarized in Duke’s poignant statement:

“There is a level of integrity that comes with the job and our position of authority.  This is more than a career; it’s a way of life.”