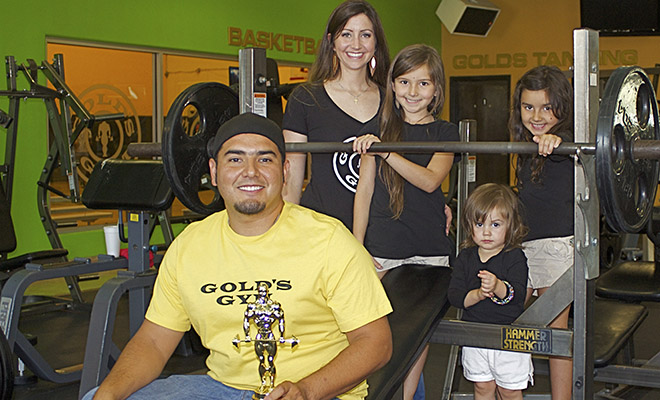 “Live life to its fullest because in a second it could all be over.” This is the advice that local pastor and Gold’s Gym’s Most Inspirational Member, Jeremy Valladares, gives to everybody that he encounters. A few months ago, he had no idea what life had in store for him. Jeremy suffered from a crippling accident on a mission trip in the Yucatan Peninsula that left him with two broken legs and a shattered radius. Although doctors didn’t think he would fully heal, his determined “can do” attitude helped him overcome his injuries and even complete a triathlon nine months later.

Prior to the accident, Jeremy was always committed to health and fitness. He was part of his high school’s football team and even played a season with the Edinburg Landsharks. Several years ago, he joined his local Gold’s Gym to get his healthy lifestyle back on track. Becoming a member of Gold’s was life changing for him. He quickly became a regular in cycling class and formed part of the tight-knit group of cyclists at the gym. He found that his instructors and friends pushed him to train harder and pursue bigger challenges.

During that time, Valladares also served as leader of the Heritage Baptist McAllen Church that he and his wife had founded over six years ago. Jeremy felt the calling to work with young people to help them do something worthwhile with their lives. He created many opportunities for local youth to participate in healthy activities, such as sports, mission trips, and volunteering in the community.

It was on one of these trips that Jeremy’s life changed forever. While he was driving on the Yucatan Peninsula, he was hit head-on by a semi truck. He spent long, grueling hours waiting for someone to pull over and help him. In Mexico, he underwent several surgeries until his health was stable enough for him to be transferred to the United States. Valladares encountered what he calls his “guardian angel” during this experience – an anonymous donor that paid for his medical expenses and his transfer to the U.S.

Valladares had a long road to recovery ahead of him, but was ready to do everything in his power to get better. Although Doctor’s told him it would take more than six months for him to walk again, he was able to take a few steps at his local Gold’s Gym just seven weeks after the accident. “What helped me walk again so soon was my mindset that I was going to get better,” says Valladares. “I think it’s just the attitude of I’m not going to quit. I have never been a quitter.” Soon he was able to walk, run, and cycle again, pushing through his pain and injuries.

A few months later, one of his church members encouraged him to participate in a triathlon after seeing how well he had recovered. He knew that his local Gold’s Gym was the best place to train for all three events and where he would get the motivation to push forward. “My cycling instructor at Gold’s Gym helped me out with training. His name is Joey Williams and he’s just an all-around athlete,” says Valladares. “He eats healthy, lifts, cycles, swims, runs, and coaches middle school football. He really inspired me to become a triathlete.” Just nine months later, Valladares successfully completed the event even though he was still healing from his injuries.

Jeremy Valladares’ commitment and determination have made him a role model for his family, friends, and the entire community. Gold’s Gym found his story to be so inspiring that they recently named him “Most Inspiring Member.” Valladares encourages everyone to find something that motivates them to get their life on a healthy path. “You have to get out there and be active and do something. It’s your life and you only have one. It’s worth fighting for, and it’s worth being healthy to enjoy your life, your family, and your kids.”