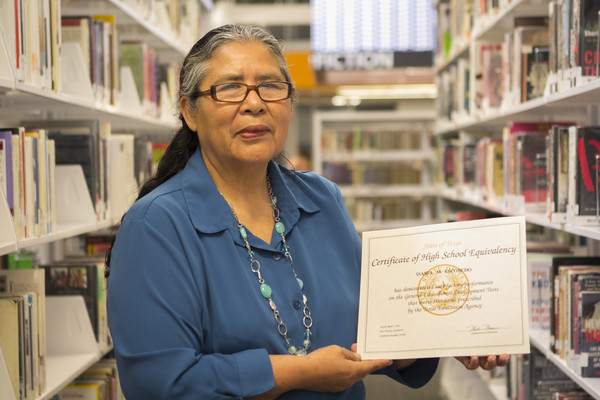 Every year nearly 200,000 people try to improve their educational and employment prospects by taking the General Educational Development test, or GED, long considered to be the equivalent of a high school diploma. People who earn their GED and the proficiencies in math, science, social studies and language arts it represents have typically had to overcome many obstacles and work hard to better themselves; most people who hold a GED also tend to foster the attributes of perseverance and tenacity.
Isabel Montiel-Escobedo is one of these people. As a child, Escobedo idolized her teachers and set out to educate herself with the hope of one day teaching a classroom of her own. But education in the tiny pueblito of Zesceca in the Mexican state of Hidalgo consisted of little more than an incomplete building run a young pair of teachers.
“When I was very young, my mother left a 20 peso coin on the kitchen table,” said Escobedo, remembering herself at 4 years old. “I took it to the store across my house and purchased a notebook and a pencil.” Clutching her newly acquired school supplies in one hand and her sister’s hand in the other, she proceeded to the school building to learn how to read and write.
“I’ve always loved school and never stopped learning,” said Escobedo. “I wanted to be educated, and be around teachers and students.”
Though Escobedo never attended primary school in the United States and she faced a myriad of social and economic obstacles, her interest in school led her to always seek out education. It was at the age of 15, after meeting with a group of Christian missionaries from the U.S., that Escobedo was given the opportunity to attend secondary school in the Coahuila, then later Bible College at the Rio Grande Valley Bible Institute in Edinburg, Texas. It was where she met her future husband, who encouraged her to take the first step in the American education system: obtaining her GED.
The GED test was created in 1942 for the U.S. military to test World War II veterans in reading, writing, math, science and social studies. It was in lieu of a high school diploma so that returning soldiers could apply for a job or enroll in college. However, in today’s economic climate, neither a high school diploma or a GED are sufficient. Further education, whether technical or baccalaureate, is critical.
“It’s not enough to just learn English or get a GED, it’s about what you’re going do with it once you get there,” says LeeRoy Corkill, Region One’s Education Service Center Adult Education Program Administrator for the past six years. As a teacher, principal and administrator throughout his 30 year career, he continues to be involved in almost every facet of education. “We want potential students to come to us, set some goals and think about going into post-secondary education.”
A GED will get most students into a community college where they can earn a certification or an associate’s degree. Region One partners with area school districts and community organizations to address the need of adult students and individuals not currently enrolled in school. These cooperative partnership sites are unique in that they offer students flexible schedules throughout the week at no cost to the student. For example, Region One Adult Education offers its Career Pathways program. Together with South Texas College, adult students can co-enroll in a technical training program at STC while working towards their GED. This allows students to work on a certificate program or earn credits toward their associate’s degree. “Ultimately, it’s never too late for anyone to set goals and try to reach them,” says Corkill.
The first time Escobedo took a GED test was more than 20 years ago through a program offered by Sharyland ISD. Although she passed the Spanish-language exam easily, this version was not accepted as an equivalency of the English-language version by the University of Texas-Pan American. As a primarily Spanish speaker, Escobedo knew earning her English-language diploma would take some time.
“The language barrier was the hardest thing for me, but I decided to go for it,” said Escobedo, who took the English-language exam through South Texas College. “My husband bought me a GED Study Book along with an English dictionary and motivated me to move forward.” On typical evenings, Escobedo and several other Spanish-speaking GED students, many of whom were parents with full-time jobs much like herself, would meet to help each other to better understand the content in English.
“Throughout my life, there have always been people motivating me to move forward, like my husband and Maria Salinas, who ran the GED program out of Sharyland,” said Escobedo. While she humbly thanks everyone who helped her on her educational pathway, it’s Escobedo’s own desire to learn that led her to obtain milestone after milestone. An associate’s from STC and bachelor’s from UTPA were followed by a master’s from the same, with which Escobedo was qualified for employment at South Texas College – teaching college-level courses to high school students at Mercedes ISD’s Early College Academy. Many years after taking the GED test, Escobedo was able to accomplish her lifelong dream of teaching