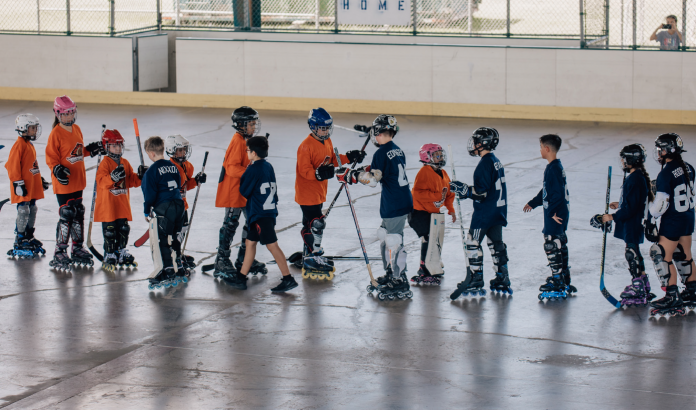 On most nights of the week, you will find a group of skaters playing a not-so-common, but growing sport. You’ll see lots of sweat, smiles, and if you listen closely, hear the sounds of hockey players cheering when their team scores or a goalie makes a great save.

What you won’t find at the rink? Ice. This is roller hockey, which bears similarities to the better-known sport of ice hockey as far as gear and rules.

RGV Roller is a nonprofit organization built to bolster, grow and support the hockey and skating community in the Rio Grande Valley. However, shortly after the organization was founded, the Valley lost its only ice skating rink. This could have spelled the end of hockey.

Instead, members of the community stepped up to make sure the void was filled with an organization that would support experienced players and newcomers — both youth and adults. 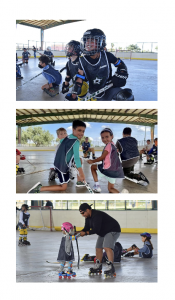 Alex Chapa sits right in the middle. He is a 16-year-old high schooler from Edinburg and the son of an adult hockey player. Chapa learned a lot from his father, a board member of the organization, and now the high schooler is sharing his knowledge as a youth coach.

“The RGV Roller community is super important to me,” he said. “I remember when I started skating there was no group where you could have organized coaches and play for five, 10 years-plus.

“I had my dad, but not an actual organization. I am just super happy to give the kids what I didn’t get when I was a kid. I’m really happy to pass on what my dad taught me, what everyone taught me. It’s hard to put into words how amazing this is. Bringing roller hockey to the Valley is really important to me.”

It was a big undertaking. All of the work is volunteer-based. Fighting for the sport was an uphill battle. But after two-and-a-half-years, RGV Roller has helped breathe new life into the hockey community — bringing new skaters to the rink regularly, and giving veteran players new life.

Susana Vargas is the parent of a 12-year-old girl who has been a part of the youth programming since day one. Vargas’ daughter Sofia plays defense for the RGV Chupacabras.

“We have had the best experience ever with the sport and the people that are involved,” Vargas said. “In my experience, most sports groups don’t teach you how to get along with your opponents.

“It’s only about winning. With RGV Roller, it’s the opposite. Yes, we’re here to play, but we leave as friends and as a family. That’s been the biggest thing we enjoy — keeping everyone, boys and girls, all playing together.” 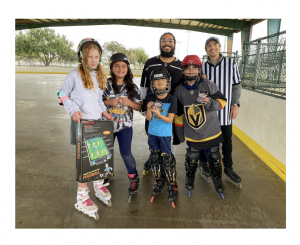 Since the idea in 2019 and gained nonprofit status in 2020, the hockey group has achieved growth and seen interest blossom.

In 2019, 15 to 20 adult skaters would meet every other weekend. Today, the adult league has grown to house league teams with between 40 to 50 players per season, plus another 20 players in the “Development League” for adult beginners. The adult group also travels around the state for tournaments and continues to elevate its standards under the guidance of Mike McGee and a volunteer committee.

There was no roller hockey program for youth in 2019. In 2022, the first season welcomed 36 skaters; the fall season is expecting to serve nearly 60 kids.

A big part of the organization’s vision is to make the typically expensive sport affordable for all newcomers. To reach this goal, the group fundraises to purchase gear and strives to keep costs reasonable.

“Sofia went in with so much passion and heart for hockey, so it’s not the same when she goes to volleyball anymore,” Vargas said. “I try to push her, encourage her and guide her to learn because, obviously, we didn’t know anything about hockey before she joined. The learning has been a really good process. RGV Roller has had so much patience.”

JP Lopez serves as vice president and has decades of hockey experience. Originally from Mexico City, Lopez saw hockey groups pop up all over Mexico and the border region after Disney’s Mighty Ducks film was released in 1992. He grew up in Rio Bravo and Mission, so he arrived to the group with experience playing hockey from a Cotton Gin in Harlingen in the 90s and 2000s.

He has been playing hockey on both sides of the border for a while and said he is proud of the homegrown nonprofit’s ability to carry on the legacy.

“RGV Roller and the community are important because having diversity in sports and different options to play is highly needed all along the RGV,” Lopez said. “Our region needs kids and adults to live a more healthy lifestyle that’s fun. This is a great combination of recreation and exercise.”

Lopez said remembering the history and honoring where the community came from is important when planning to grow. He reminisced on the days of the Cotton Gin when the ice and roller rink were built, the numerous coaches he had in Mexico and the countless people he has coached, watched grow up, and eventually competed against. 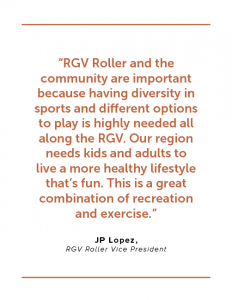 “Combining experience with new talent is a good formula to continue producing talented and high-quality programming,” he said.

RGV Roller is always welcoming new players and accepting help from people of all backgrounds. High schoolers can work with the organization to earn community service hours, photographers can practice action photography, and media and marketing interns can help craft messages and videos.

RGV Roller is embedded in the community and its leaders plan to continue working hard to grow the sport of hockey, teach people how to skate, and help young people reach their goals with volunteer opportunities.

Four days a week, different divisions of roller hockey can be found at the McAllen Sports Park — Hockey Pavilion. The City of McAllen-owned roller rink, built in 2005, has seen more frequent usage thanks to hockey and roller derby.

Reach out on social media or via email at RGVRoller@gmail.com to get involved in any capacity.