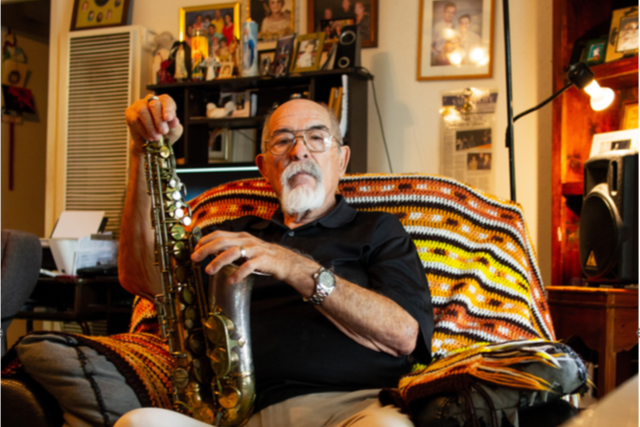 Which Texan was inducted into the Tejano Hall of Fame in 2006, memorialized on the Tejano Walk of Fame, and honored by the State of Texas for his music contribution? If you said Rene Sandoval, you’d be right. Sandoval, now retired at age 82, is not only a legend in the Valley, but throughout South and Central Texas — and even the world.

Sandoval was born in Pharr, the youngest of seven children, with three older brothers and three older sisters. Music filled their home, and Sandoval recalls that it was not uncommon for the older siblings to clear the living room of furniture, put on swing and jazz records, and dance the night away. They particularly loved the jitterbug, although they danced the polka and other dances. When Sandoval was in the seventh grade, he picked up his first instrument (the clarinet) and it was love at first play. At age 13, he began playing with the Mario Saenz y Los Gavilanes band in dance halls throughout the Rio Grande Valley and knew that this was what he wanted to do with his life.

In the 1950s, at age 19 and newly married, Sandoval got itchy feet. So he and his wife, Minnie, moved to Houston because music, and especially jazz, was immensely popular there. He played in bands all over the city until one day he received a call inviting him to join a newly formed Texas Jazz Festival in Corpus Christi. What had begun as a jazz demonstration to students back in 1959 grew into a fully fledged jazz festival that is still going strong at present. Sandoval first played for the festival in 1961 and became an instant hit and a permanent fixture. Today he is considered one of the founding partners of the festival and he played for a record-breaking 54 consecutive years.

He and his band played a wide variety of jazz, from the more traditional swing and big band numbers, to the Cuba-influenced Latin jazz songs. As the popularity of jazz soared, so did the demand for great bands, so Sandoval decided to hit the road, playing in venues all over the United States, as well as Canada. He was also instrumental in establishing music venues in McAllen and Austin. 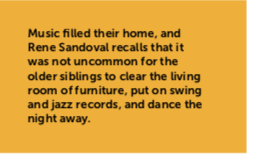 Meanwhile, his wife kept things going at home and soon their family expanded to six children, five girls and one son.

“When my kids got older, though,” Sandoval said, “I realized it was time to come back home and be there more for them and for Minnie.” At that point he stopped traveling, although he still played at the annual Texas Jazz Festival and in local venues.

In the mid 1970s, both he and Minnie had tired of big city life. Their kids were now grown and the lure of the Valley called to them. They moved back in 1975 and Sandoval started playing locally. At that time, there were not many venues in which to play, but in the mid-1980s, the Embassy Suites asked him to put a group together and play for them on weekends. “So, I did that for 32 years,” Sandoval said. They played a mix of polka and swing, but always managed to squeeze in some jazz numbers. That, in the end, is what people came to the Embassy Suites to listen to. It was not unusual for people to drive in from Mexico to have dinner and listen to Sandoval and his South Texas Quartet play.

Toward the end of 2014, the Embassy Suites in McAllen announced that it would close for a couple of months at the beginning of 2015 to undergo a total remodel. Sandoval, knowing that one of his band members, Jim Cain, was facing some serious health issues (Cain died in early 2016), decided that it was time to retire, too. His final official performance was Dec. 31, 2014.

When talking to Sandoval, there are several words that come to mind. “Passion” is one. “Consistency” is another. It is seldom that you talk to someone who says, almost cavalierly, “Oh, I played at that location for 54 years.” Sandoval must surely be seen as a Texas music hero, bringing music alive for hundreds of thousands in Texas and around the world.