MCALLEN – Sophia Olbera, 8, puts both of her hands straight out in front of her face and spreads her Flamin’ Hot Cheetos®-stained fingers in the air.

“Okay, now show me you all remember your finger numbers,” her teacher, Chloe Ayala, chirps to the eight IDEA McAllen students.

Olbera concentrates intently on wiggling both her thumbs, then her pointer fingers, then her middle fingers, and so on as Ayala calls out numbers.  Beside her, Olbera’s friend, Loryn Sanchez, 8, giggles, and soon Olbera is chuckling too.

If Sanchez and Olbera were taking piano lessons 40 years ago, they would be doing so separately with one-on-one instruction.  And there would probably be less giggling.

Instead, though, they are taking a group piano lesson at IDEA McAllen developed and promoted by husband and wife Medardo “Matt” and Debra Perez, who run Valley Keyboards and the Pedagogy in Motion Publishing Company, respectively. 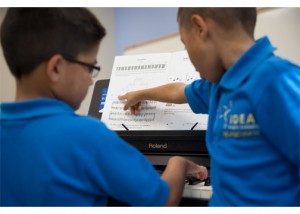 Upon first glance, Valley Keyboards on North Tenth looks like a gleaming piano showroom. Beyond the pianos, however, are small classrooms jammed in every corner.  Opposite the front door, above a desk, a saying is painted on the wall.

“You can play, we guarantee it,” it reads.

It reflects Debra Perez’s different approach to teaching music.  Instead of preaching that practice makes perfect, she posits that simply playing for the joy of playing can unlock the benefits of making music for everyone.

“It used to be that you would play music by yourself, and it was not for everyone,” Debra said.  “But we believe that a musical education is for everyone.”

Following that philosophy, Debra runs several piano classes out of Valley Keyboards and the couple’s other store in Corpus Christi.  Instead of recitals, the classes perform celebrations, where Debra tries to drive home why it’s important to learn music to the younger students’ parents.

“We all have music inside of us.  I tell the parents ‘When your children are as old as I am and they come home from a hard day’s work and they play some piano to relax, then I have succeeded.  It’s not when they are playing Carnegie Hall; it’s when they use music as a stress reliever.”

To awaken the music already inside her students, Debra worked with a composer, Will Bailey, to develop the Way Cool Keyboarding books.  The books work off the theory that children learn better by making and hearing music before they start writing and labeling notes.

“The traditional way of teaching music is a bit backwards,” Debra said.  “Because you start out reading and writing before you ever get to do it.  In the traditional books that we have (in the store), you can see that even for the 4 and 5 year

olds, it starts saying ‘OK this is a quarter note’ in week two.”

That’s the idea behind the “finger numbers” that Obera and Sanchez practice in their class; the kids learned to move certain fingers in unison before learning the names of the notes.  And that feature of the classes is not the only thing that makes it different than traditional piano teaching methods.  Additionally, Debra believes that children learn best in groups, rather than one-on-one instruction.

“We use the peer interaction and positive peer pressure,” Debra said. “The future of education is kids helping each other and teaching each other.  We let them have bands and name their bands, like one group came up with the name The Black Eyed Keys.”

Learning together does not just help the students to learn music, Debra added.

“It teaches teamwork and respecting each other.  These are skills that are life skills and will help them as they get older,” she said.

Debra has recently brought her classes to IDEA McAllen and IDEA Edinburg as after-school options that parents can add to their child’s education at registration.  Olbera and Sanchez are in one such class.  They share a digital piano with songs and various instruments programmed into it, and they pull out their Way Cool Keyboarding books out of the shared bench.

Meanwhile, Lori Leal, of McAllen, peers in the window as her 8-year-old son, Alberto, plays his shared piano along with the rest of the class.  Leal said Alberto has been playing piano since kindergarten in a Montessori school, and she thinks offering the classes at the IDEA campus after school is, well, a good idea.

“I really like this,” Leal said.  “When they’re this small, at this age, they’re like sponges – they absorb anything, and music is really good to have in life, because it makes it easier to pick up more stuff.”

Debra said working with the two IDEA campuses has been a win-win situation for everyone involved, especially the parents.

Both Debra and her husband, Matt, said while the goal is to awaken students of all ages to the music already within them, the larger purpose is to enrich the Valley with music education and improve the quality of life.

“At celebrations, I will say to the parents ‘have any of you taken music lessons before?’ and like two hands will go up,” Debra said.  “So that tells me this is a generation of parents that want more for their children than they had.”

Debra is not just looking to the Valley’s future, but to the future of music education itself.  Her eyes light up with excitement when she considers what iPads or remote classes could do to teach children music.

“Can you imagine live streaming classes?” Debra said.  “(It would) connect kids from here and other places so they can share music and make friends.”

Debra said this kind of forward thinking is essential.  Today’s children aren’t built for the old model of piano teaching.

“In education, we have to be willing to change and move forward, and that’s not happening in music,” Debra said.  “Life is different today, and kids today will have different jobs, and so the musical education that they need is different than what I needed.”