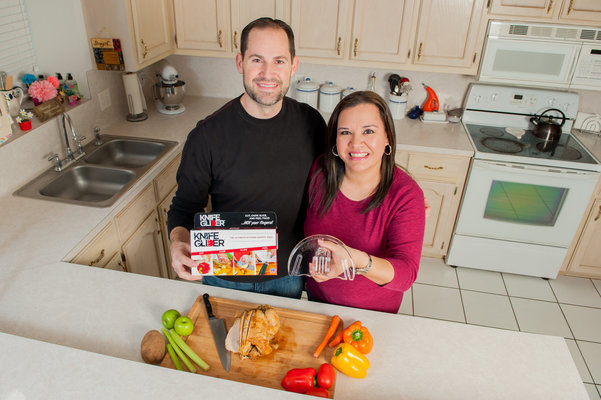 Husband and wife entrepreneurs Sam and Jennifer Shipp woke up on December 28th, 2015 to find the online sales of their two-week-old business shooting through the roof.   At first they noticed all the sales were coming from the eastern coast.  An hour later, from the central states. Next, the west coast.  “What was going on?” Sam wondered. The couple from Mission, Texas were anticipating that the exposure they received on ABC’s Good Morning America would boost sales, but they hadn’t realized that the segment would be airing that morning. As the show made its way across time zones, sales were pouring in.

Jennifer Shipp had previously been invited to feature their brand new product, the Knife Glider, on a segment entitled “Life’s A Pitch” with Joy Mangano, the inspiration for the movie Joy starring Jennifer Lawrence that premiered this past December. The movie tells the inspirational story of how she succeed as an entrepreneur with her Miracle Mop design and went on to be “the Infomercial Queen.”

Jennifer, a stay at home mom, explained to Joy that she feared nicks from handling a knife and removing food from the blade.  Knife Glider serves as a plastic guard between the knife’s blade and the user.  “The sign of a great product is that it solves a problem,” Joy said, complimenting the Knife Glider. At the end of the segment, Joy awarded Jennifer a check for $10,000 to go towards growing her and Sam’s burgeoning business.

While being on national TV certainly factored into their “overnight success,” the Knife Glider has actually been five years in the making. Officially their business is only months old, but for much longer than that the Shipps have received assistance through Mission EDC’s Ruby Red Ventures initiative.

“Nurturing entrepreneurs and empowering individuals- these are the goals of Ruby Red Ventures,” states Alex Meade, the CEO of Mission EDC.  While Mission EDC is committed to attracting large corporations to its city, they also realized the importance of investing in people.

Meade explains that when introducing major companies to Mission, a strong local economy is really attractive.  Ruby Red Venture is helping to develop the local economy of Mission by empowering local business owners and entrepreneurs with the knowledge and skills to run and maintain a business, coupled with the capital to grow their company.

“They are just awesome at the Mission Economic Development Corporation,” Sam declares.  “I encourage anybody who has a great business idea to look at Ruby Red Ventures. They are excellent to work with.  They are very informative and they will give you the tools you need so you can move forward with your project.”

The Shipps’ first attempt at bringing Jennifer’s idea to life was a bulky concept made from materials Sam found at Home Depot and Hobby Lobby.  After exhibiting it at various trade shows, the Shipps streamlined their design. In 2013, through Ruby Red Ventures, Sam attended nine hours of business classes given by the UTRGV Small Business Development Center. “They really helped refine our business plan,” says Sam.

Sam’s twenty-page business plan was evaluated and moved on to the final round where he was asked to present it to prominent members of the Mission business community.  The Knife Glider was awarded $10,000.  With their award money, they were able to create a working 3D prototype and patent it.

In 2015, they applied with Ruby Red Ventures again.  This time they were awarded $15,000 which they put towards manufacturing their product.  They have kept their business local by utilizing local manufacturers; to create the mold, they employed Priority Tool out of South Texas College.  They used Emu Plastics in the McAllen Trade Zone to produce the actual product.

Knife Glider is still on the rise.  They have launched on the internet through knifeglider.com, Amazon, Facebook and eBay.  Each site has videos that demonstrate the product.  Next they hope to be able to demonstrate their product on television and have been talking to leading at-home shopping networks.  They hope to see their product on the store shelves one day, and are excited that Bed, Bath, and Beyond has already expressed interest.