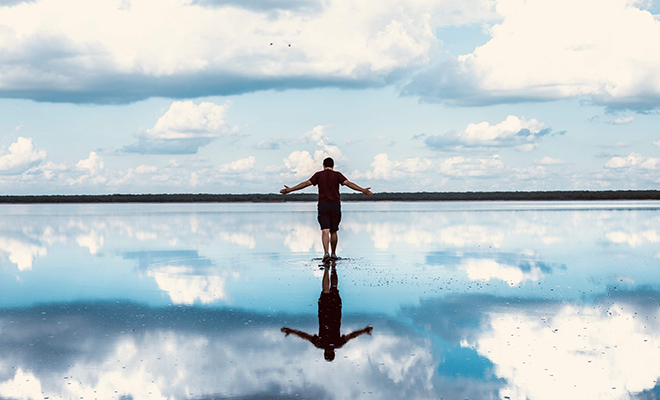 La Sal del Rey is one of the Rio Grande Valley’s hidden pearls, or at least that’s how Félix María Calleja del Rey y de la Gándara, Count of Calderón, described it when writing to the Spanish Crown back in 1795 when surveying the area, mentioning that it was the “color of the mother of pearl.”

The lakes are thought to be the remains of an inland sea that eventually receded, leaving behind 4 million tons of coagulated salt, according to Chris Quezada, a visitor services ranger at Laguna Atascosa National Wildlife Refuge.

La Sal del Rey, or The Salt of the King, has been used for centuries as a bounteous resource for both different people and local wildlife well before the arrival of the Spanish. “The people that originally lived around the lake were a Coahuiltecan tribe called the Sepinpacam. Living by the lake gave them access to the animals that came to the lake,” explained Dr. Ruben G. Flores, a professor at South Texas College and self-described history buff.

Flores is known to delve into archives of the history of the Rio Grande Valley, and recently found information on La Sal del Rey in UTRGV’s Community Historical Archeology Project with Schools (CHAPS). “I was enthralled,” he said.

The Spanish used the salt for international trade, and Peñitas and Reynosa were booming trade centers because of the salt lake as well as other natural resources in the area. “People became rich here through the trade of salt,” Flores said.

During the Civil War, the lake was seized by the Confederacy, which used camels (yes, camels) from the experimental Camel Corps to transport salt to Brownsville and Matamoros to be loaded onto ships for export.

According to the research conducted by Flores, La Sal del Rey was eventually reclaimed by the Cardenas family, one of the original owners of the lake, before being forced to flee to Mexico upon the arrival of the Confederate Army. The lake continued to be mined until the 1930s, after many changing of hands, inheritance lawsuits, and land grant agreements, while the land around it was developed for agricultural purposes. In the early 1990s, management of the lake passed to the Lower Rio Grande Valley National Wildlife Refuge.

Although the mining came to a halt, the area around the lake had been depleted after decades of farming. Quezada gave some insight into what that means for local wildlife.

“Throughout the RGV, these impacts have reduced wildlife such as ocelots, jaguars, bears, and coatimundi to limited areas of the RGV (ocelots) or pushed these into Mexico (jaguars, bears),” he said. “La Sal del Rey is important because it provides habitat to species like these — although it is more common to find wildlife such as javelinas, deer, nilgai, sandhill cranes, turkey, and other bird species. You’d be surprised at some of the wildlife you can find in the RGV.”

Both Quezada and Flores highlighted the local wildlife as a focal point of attraction that tourists should look forward to seeing when they go visit.

Thankfully, there is a plan in place to recover the effects of human impact on the area.

“The U.S. Fish and Wildlife Service is working to restore these agricultural fields into native habitat,” Quezada said. Rio Reforestation is a public planting event, and Quezada described that “partner nurseries provide roughly 12,000 saplings that are then hand planted in farm fields ranging from 15 to 25 acres. This event brings anywhere from 700 to 1,500 community volunteers.”

Although the reforestation project still has work to do, a trip to the lake rewards visitors with “outstanding views of this unique area.” To see photos of the area, make sure to check out the following hashtags so you can plan your own trip!

Have you experienced Sal Del Rey up close and personal? #JoinTheConversation at facebook.com/rgvisionmagazine.