April Fool’s Day, also known as All Fool’s Day is traditionally celebrated every year on April 1. The butt of people’s jokes often are meant to ridicule, humiliate and trick the ones we love the most. And generally… it is hilarious. But how did April Fool’s Day come to pass? Allow me to enlighten you: 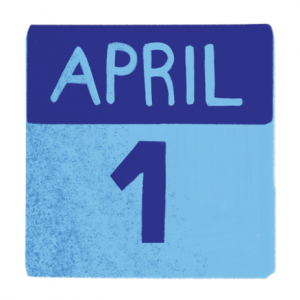 Captain Peg-Leg, a pirate, began traveling the seven seas with his crew on the ship, The Copper Kipper, in search of a rare booty,  a stone known as the “Belovian Ruby.” He reached a port, the Dirty Dinghy, and entered a pub where he told tales of the gem hidden in a land known as “Boulder Rocks.”  In the corner drinking alone was a fisherman who overheard the tales. The fisherman, known as Clemons April, told the captain he knew not only where this land was, but had long ago heard where the gem was located.  It was north of the port.  He told the captain that the land was treacherous and he had not dared to go himself.  He drew up a map for the Captain detailing where the precious stone was hidden.

The pirate Captain wasted no time and voyaged for six days.  Once there, he eagerly walked the paces in the map.  Starting from a large dead oak, he began walking north for fifteen paces, thirty-six to the west, fifteen paces south, and then thirty-six paces to the east.  There he began digging, he and his crew dug for six months but found nothing.

Captain Peg-Leg then set back to the port in search of Mr. Clemons April, but once he reached the port he saw a large, lavish ship which must have been three times the size of the Copper Kipper.  Emblazoned on the magnificent ship’s side was its name, the “Belovian Ruby.”  On the ship walked its new captain, Captain Clemons April.  It was the first day of a new month, and Captain April fooled him.

April Fools! That’s not how the celebration began. According to a “reliable source,” no one actually knows the true origins of April Fool’s, but it won’t stop us from hoaxing our loved ones for years to come.

Here are some of RGVision’s readers favorite pranks

And for their safety and reputation they’ll remain anonymous.

And we’re like, ‘What?’ He’s like, ‘[The hosts] mom is here! What do we do?’ And so I was running around the backyard with a half-lit joint and I’m like, ‘Oh my God. Oh my God. Oh my God!’ I’m running in circles because I’m super high and freaking out.

And my friend yells, ‘just eat it dude!’ So I eat this lit joint, then I grab this other joint out of my friend’s hand and yell, ‘We’re not going down!’ And while I’m in the process of officially swallowing the last one, my friend yells, APRIL FOOL’S! I think we beat him up after that. Just kidding.”

Thank you to our readers who participated in this article. Happy April Fool’s Day!