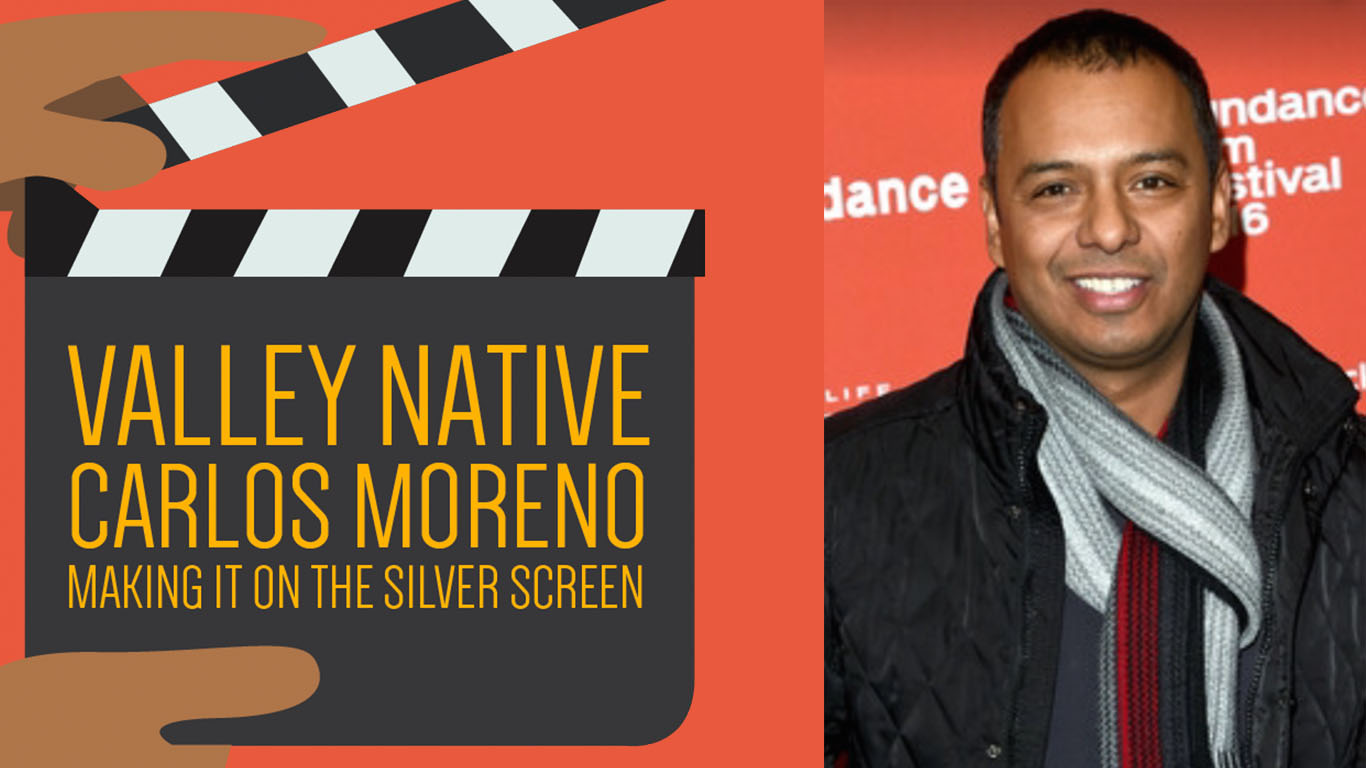 Maybe he’s not yet a household name, but Carlos Moreno, Jr. has developed an acting career the Valley will want to keep on its radar. The San Juan Native has quite the prolific resume, with roles in over fifteen films and TV shows including Dexter, ER, Transformers, Habanero and Pacific Rim.  This year, Moreno landed an invitation to the Sundance festival for his part in Frank and Lola. A grand achievement in itself, his journey to Sundance is no less remarkable. Moreno’s life story speaks to his tenacity and humility, as he hasn’t let the success go to his head or change him. Rather, among the many roles he’s played over the years, the one that brings him most satisfaction is that of community advocate and teacher.  Moreno takes every opportunity to encourage people from all walks of life to keep knocking on doors, all the time “looking for ‘yes’ doors.”

Morenos has a strong belief that the arts are vital. “Without art,” says Moreno, “you kill the community.” He wants to serve as a role model for minority youth who may not feel confident enough to follow artistic dreams into the theater. As for himself, he was never one to suffer stage fright. Moreno’s first roles were in his childhood when he participated in nativity scenes at his church. “Well, I thought I was going to be Joseph,” recalls Moreno. “But no! They gave me the shepherd. I was pissed!” He jokes, “Immediately, I was stereotyped,” a tongue-in-cheek allusion to some of the roles he’s been cast in.  Still, he is grateful for the experiences, as he has learned valuable lessons from his renown co-workers and colleagues since making it to Hollywood.  Vital to his development as an actor was director and Moreno’s former mentor, Milton Katselas, who passed away in 2008. He had previously coached stars like Marlon Brando, George Clooney, and Jim Carrey, among others. However, Moreno’s less prestigious life experiences before he ever set foot on a red carpet have also shaped him into the actor, instructor, and student of life he is today.

Moreno developed a life philosophy in his youth working in the fields, toiling as a migrant worker beside his elders. He has vivid memories of gazing upon the fields he and his family worked, with the monumental task of 30-40 acres to clear before them. His uncle would tell him not to look that way, and to focus instead on what was before him. Moreno remembers him saying, “By the time you know it, you’ll be there.”

He applied this work ethic to his education, intending to become a politician. However, Moreno recalls that his interest in acting  was again renewed at around age 16 through the drama club at his alma mater, PSJA High School. After graduation and once in university, Moreno had to wrestle with future goals when choosing a major: political science, or his passion? Regardless of the condescension Moreno received from his university advisor when he disclosed his plans to pursue a career in acting, he shortly after got an acting role in East Meets West, and the rest is history.

Morenos would like to share these memories, and the “golden nuggets” of wisdom he acquired from the stars, with the Valley. He feels there is a need here to support aspiring entertainers as the touring acts that sometimes stop in the Valley do not staff locals, according to Moreno – only actors from larger cities like Austin, Corpus Christi, and San Antonio. Moreno wants to tap into the talent he knows the Rio Grande Valley possesses by opening an acting school in McAllen within the next few months. Also in the near future, Moreno plans on giving a workshop and delivering a keynote speech at this year’s Festival of International Books and Arts (FESTIBA) at The University of Texas Rio Grande Valley.

As one can tell, giving back to the community is Moreno’s priority aside from acting, though given the nature of both, they are one and the same. Whether moving our hearts from the stage, or encouraging local youth to do so from the director’s chair, Carlos Morenos, Jr. is contributing to a Rio Grande Valley full of art and appreciation for it.  This vision is certainly attainable if arts are made a priority in our education, but at home, art is something we can all take part in as individuals.  As Carlos’ uncle says, by the time we know it, we’ll be there.