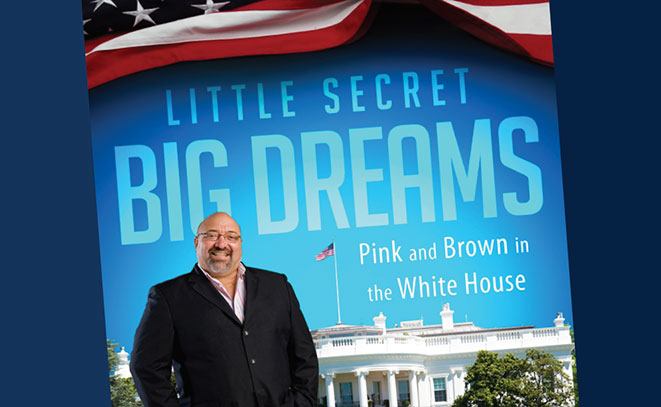 In the second grade Moe Vela Jr. discovered something about himself that would help him deal with his little secret and pursue big dreams.

“We had a talent show and I got up and sang ‘Raindrops Keep Falling On My Head’ and for four minutes I found a platform,” he said. “At that moment the seed was planted.”

Vela’s story is one of growing up gay in the Rio Grande Valley and spreading his wings on a journey of self-discovery and success that took him into the West Wing of the White House and beyond.

In the book Vela uses his life story to teach about how love and tolerance can help overcome life’s obstacles and set people free to be themselves.

“If you feel different for any reason I want to you to know you are special,” he said. “It doesn’t matter where you grow up, you can overcome all the difficulties and learn to love yourself, and then go on and live your dreams.”

The Valley of Vela’s youth was one he describes as a Latino version of “Leave it to Beaver.”

“There was an innocence and a naiveté and there was this sense of comfort and security in the Valley,” he said. “We weren’t really tarnished by what might be happening in other parts of the country. My childhood was beautiful in so many ways.”

But there was a darker side to growing up as Vela dealt with his little secret that he was gay.

“My church was telling me I was going to hell. My culture was telling me I couldn’t be who I was,” Vela said. “When you have those types of messages coming at you on a daily basis you can end up living this profoundly lonely experience.”

He suffered bullying at the hands of his peers and sometimes felt like he would never be accepted as the person he was — a gay man.

During those years Vela also learned valuable lessons from his family, who helped him cope and dream of a brighter future. The Vela clan has a long history of public service in South Texas, with his father and uncle serving as judges. His aunt served as the Brownsville mayor and two of his cousins have served as U.S. congressmen.

“One lesson was to always give back and be of service to your community,” Vela said. “Two, strive to achieve your God-given potential and live your life with no regrets.”

After graduating from Harlingen High School in 1980, Vela attended the University of Texas at Austin. His dream at the time was to become a Broadway stage performer and after college he left Texas for New York City, a move that proved to be a pivotal moment in his quest for acceptance.

“Somehow being on stage and performing, somehow in my mind that was the closest I could come to being me without revealing my secret,” he said. “Broadway was the last step in that acceptance. I came out after that and my life changed completely. Since then, in my own way, I’ve been on stage ever since.”

He returned to school and graduated from St. Mary’s University School of Law, a move that helped launched his successful career in law, politics, business, and finance. Vela is currently the president and CEO of The Vela Group, a global business development consulting firm with clients in the United States and Latin America.

His decision to write “Little Secret Big Dreams” was deeply personal and yet another extension of his desire to give back.

“When I was being bullied growing up in the Valley, I wish I knew then what I know now: that we are all very special people as human beings and we are all worthy,” he said. “You can overcome all the difficulties and learn to love yourself, and then go on and live your dreams.”

In the simplest of terms, Vela said he wanted to help people discover that learning to love and accept others can in turn lead to being loved and accepted.

“Love became the overarching theme for me,” he said about his personal growth. “It didn’t matter if it was the vice president or the janitor at the White House, I loved equally. That is a Vela virtue. That’s something we were taught in the Vela family.”

“Little Secret Big Dreams” is available on pre-order at Amazon.com and will hit bookstores on Nov. 15.