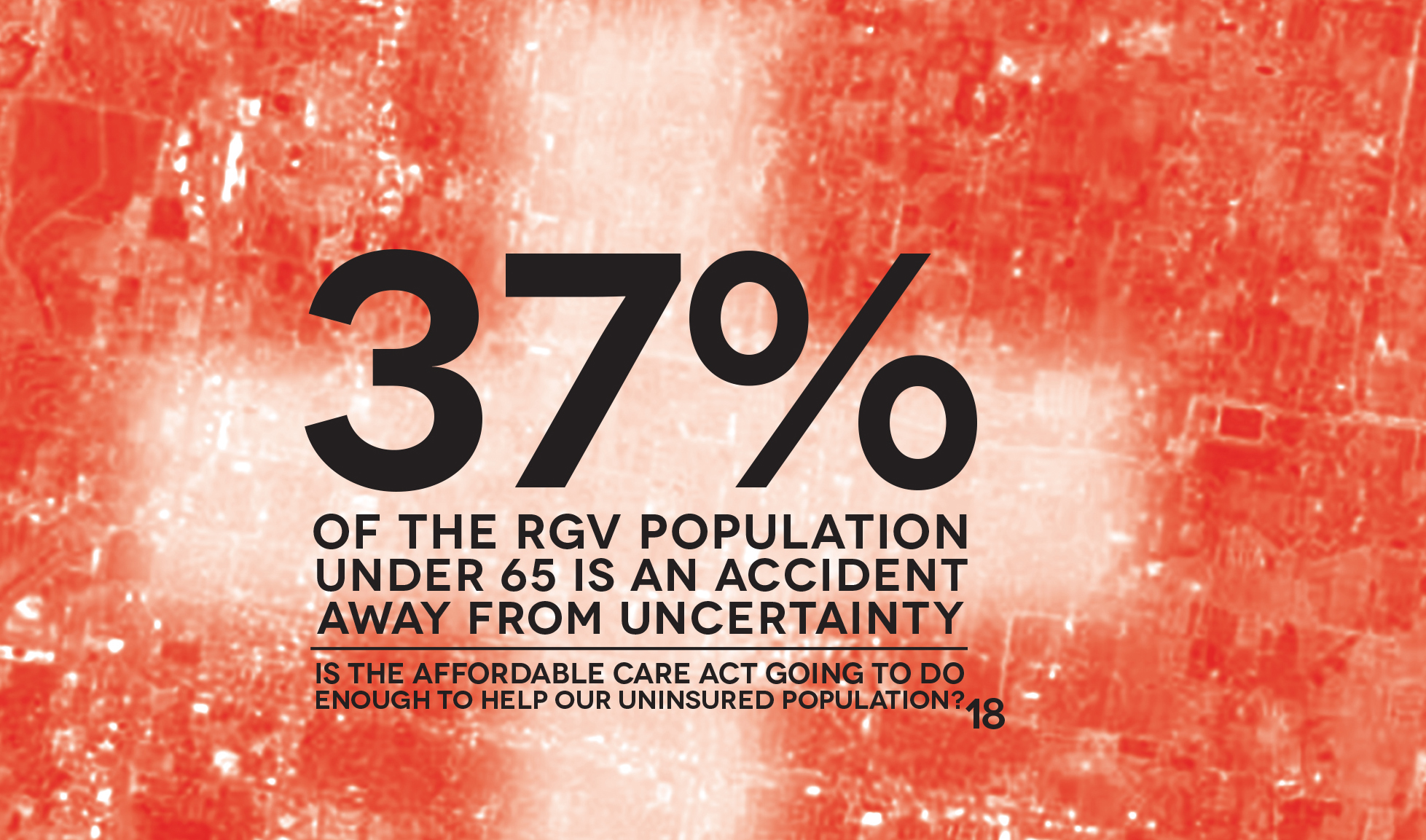 As the federal government begins its rollout of a hotly debated expansion of healthcare across the nation, it still remains to be seen if families in the Rio Grande Valley can even afford the healthcare exchanges set to begin in October.

Those who represent the poorest families in the Valley say Texas’ decision to opt out of a state-run exchange, defaulting to the federal run program, and the subsequent measure to prevent its Medicaid expansion, means people will be needing help to navigate the system.

“Our clientele for sure will be under that 100 percent,” Cass said.

Proyecto Azteca is a member of the Equal Voice Network, which is funded through the Marguerite Casey Foundation and exists to help low-income families “strengthen their voice and mobilize their communities in order to achieve a more just and equitable society for all.”

They are among 12 non-profits funded by MCF.  Four years ago, their campaign “Equal Voice for America’s Families” decided that healthcare was decidedly the most important issue that came up among communities across the nation.

“Our next step is to meet with businesses across the Valley and ask them about what it will take for them to provide health insurance for employees,” said Cass, who also chairs the RGV Equal Voice Network’s health working committee.  Proyecto Azteca has also been trained by the Center for Public Policy Priorities (CPPP) to educate communities as Obamacare rolls out next month.

“If anybody needs education on it, we are going to be working with the navigators from Migrant Health Promotions for anyone who needs help going into that national pool of health insurance to see if they’re qualified for supplements and help them choose a health insurance plan,” she said.

A report issued by the left-leaning Center for American Progress Action Fund shows that the Texas-Mexico border region has the highest rates of uninsured individuals under age 65. The report entitled “The Counties that need the Affordable Care Act the Most,” says that counties on the Texas-Mexico border dominate the various “30 Worst” list provided by the study. 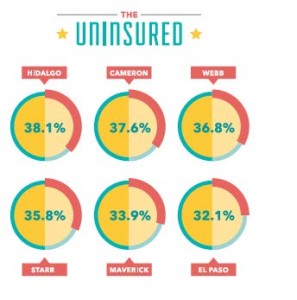 When it comes to the percentage of uninsured individuals under 65 earning between 138 percent and 400 percent of the federal poverty level, four of the top ten counties are along the Texas-Mexico border – Hidalgo at No. 2, Cameron at No. 3, Webb at No. 4, and Starr at No. 10.

“If everyone has insurance, the cost of medical care should go down, but not everybody is going to have insurance,” Cass said.  “Our families here would have benefitted from adult Medicaid.  We are going to have them go through the navigating process anyway to see if there is a possibility of a package they can afford.”

When Congress passed the Patient Protection and Affordable Care Act back in 2010, it resulted in both sweeping changes as well as long term overhaul of nearly every aspect of the nation’s healthcare system, while leaving its indelible mark on an insurance industry struggling to keep pace.

Dusty Davenport is an independent insurance agent and partner at Davenport & Associates in McAllen, and he specializes in the sale of group and individual health insurance policies.  Since 2005, Davenport and his father, Rip Davenport, have assisted local businesses with the acquisition of company health insurance policies.  Since the earliest portions of the ACA took effect back in 2010, Davenport has been proactive in keeping his customers up to date with the latest changes.

Despite the fact that the topic of healthcare reform has been covered extensively in mainstream media, the bulk of its subject matter remains politically charged, leading to public misinformation and speculation, Davenport says.

“A lot of people, especially employees, think they are getting free health insurance, and that may be true for a select group of lower income employees.  However, there will be many people who don’t realize that they’ll have to get insurance through their employer or buy insurance somewhere else at a cost to them,” he says.  In fact, under the ACA’s mandatory coverage provision, failure to obtain insurance will result in a fine of $95.00 per adult and $47.50 per child.  Those fines will increase more than threefold the following year, before capping off at $695.00 per adult and $347.50 per child by 2016. 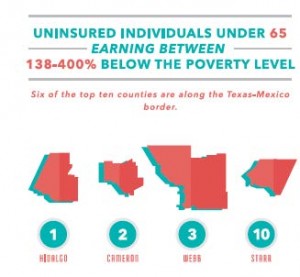 “As of January 1, 2014, people must have health insurance.  By October, the insurance policies should be available on an individual basis.  The first year they’re allowing enrollment to run until March, and after that time, people will not be able to enroll until the following year” explains Davenport.  In essence, this October represents the deadline established by the federal government for each individual state to begin implementation of its state-based health insurance marketplace.  Texas has opted to default into a federally-facilitated marketplace model.

For medium-sized business owners consisting of over fifty full-time employees, the next step consists of seeking a health insurance provider, something Davenport says he is actively assisting with.  “We’ve been contacted and have met with several corporations that don’t currently offer insurance; however, the Obama administration has recently decided to delay the corporate insurance mandate until 2015, so many have decided to wait a year.”

For individuals who already own a health insurance policy, new regulations by the ACA may or may not require some changes to that existing policy.

“There’s going to be a lot of people who will receive a letter stating that their current policy is being terminated because they don’t meet the new federally-mandated minimum deductible rate.  Customers will have to either switch plans or cancel completely,” Davenport says.  Meanwhile, policyholders with a policy created before the ACA have the opportunity to be “grandfathered in,” and therefore remain mostly unchanged for the time being.

If it sounds overwhelming to you, you’re not alone, Davenport says.

“We’re getting so much information from so many different sources; it is difficult even for us to put it together. It’s a big thing coming,” he says.

While Davenport and thousands of others in the insurance industry work on educating corporations, others like Anne Dunkelberg, Associate Director of Healthcare for the Center for Public Policy Priorities (CPPP), are focused on individuals and families.  Founded in Boerne, Texas, by a Congregation of Benedictine Sisters back in 1985, CPPP was established in an effort to improve healthcare access for the 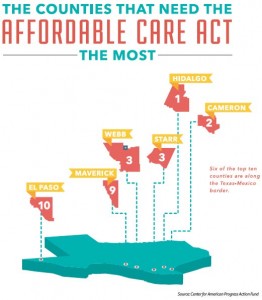 Today, the organization has expanded its commitment to include nutrition, jobs, and education for Texas children.  “We’re a mission-based organization that believes that it’s an important goal for American society to provide a decent standard of healthcare for every person here,” explains Dunkelberg.

Although many of the initial provisions of the ACA, such as “guaranteed issue,” which requires insurance companies to provide coverage regardless of pre-existing conditions, have lowered the numbered of uninsured people, and Dunkelberg and her colleagues believe there is still a lot of work to be done.

Since the ACA’s implementation three years ago, there has been concern about possible gaps in the legislation known as “coverage gaps,” which have the potential to leave thousands – if not millions – of people uninsured, she says.

“The way the act was written by Congress in 2010, the only real coverage gap was for people who were in the country illegally, and then there is the other coverage gap, which is what we’re trying to focus on here at CPPP.  This is the gap created by Texas,” says Dunkelberg.

Like several other states, following the NFIB vs. Sebelius ruling,  Texas chose to opt out of Congress’ proposed Medicaid expansion program.

“The Medicaid Expansion was never intended to be optional, but was actually part of a range of affordable health care options, a piece that was intended to take care of the lowest income families,” Dunkelberg says.  The end result is a coverage gap in an already underserved section of the population.    Not only does this affect individual families, but also entire communities, as Dunkelberg points out “using the State’s Medicaid agency’s own numbers to illustrate how much money Texas counties would get, Hidalgo county alone would be gaining an estimated additional 400 million dollars per year in healthcare spending.”

“This is a lot of money for an economy like the RGV, creating jobs and functioning as an economic engine,” she said.  Ultimately, the Medicaid expansion relied on public support founded on an understanding of what was to come.  With that in mind, Dunkelberg says the CPPP has become instrumental in educating the public about these policies.

“Since the ACA was passed in 2010, we’ve gone around the state, including many trips to the RGV, and we have done hundreds of speaking engagements and trainings, talking to thousands of Texans about the law and what challenges Texans would be facing,” she says.