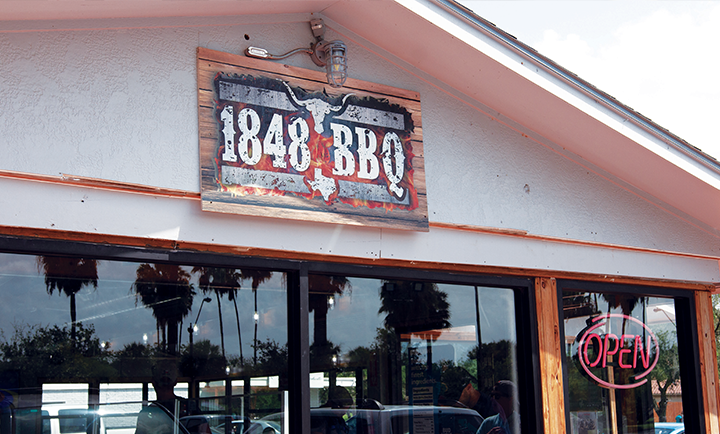 Abraham Avila wanted to serve Central Texas-style barbecue while telling the story of Brownsville. So he opened up 1848 BBQ — named for the founding year of the city — in the heart of historic Brownsville. With Avila as pitmaster, 1848 serves up classic brisket, baby back ribs, pulled pork, turkey, sausage, plus fixings with a border twist — charro beans, macaroni and cheese, and Avila’s grandmother’s corn pudding recipe, among others.

“It’s about as close as you can get to a homemade, home-cooked meal,” Avila said, emphasizing how he and one of his cooks are the only people making the food that brings people in from far and wide — or just out back, where a popular bicycle path winds just past the massive pit. “Everybody comes for the brisket.”

The brisket was why the film crew for BBQuest was there on a scorching afternoon in late June, sunburned and windblown from a day of bay fishing and sightseeing in Port Isabel and South Padre Island. It was day one of a three-day shoot that would explore barbecue and culture throughout the Rio Grande Valley via the Beef Loving Texans-hosted web series. The first season is currently streaming on Hulu.

“For every location, we work with a local guide — whether that’s an executive chef or a local culinary expert who can kind of lead us around,” said Rachel Chou, executive producer of BBQuest and senior manager of consumer communications for the Texas Beef Council.

For this episode, that guide was McAllen chef and restaurateur Larry Delgado of house. wine. & bistro., SALT — New American Table, and Salomé on Main.

The final decision of what places to feature — 1848, Smokin’ Moon BBQ & Beer Garden in Pharr, and Vera’s Backyard Bar-B-Que in Brownsville — was left up to BBQuest. BBQuest also highlights landmarks and points of interest in the cities the show features. The first season included Austin, Dallas, Houston, and San Antonio.

“For the second season, we’re getting out of those major cities and really showing the breadth of Texas and how diverse the state is — diversity of landscape, diversity of things to do there, but really the cultural differences and influence that it has in barbecue,” Chou said.

The Rio Grande Valley’s episode, which will also include trips to Quinta Mazatlán in McAllen and Santa Ana National Wildlife Refuge in Alamo, will air toward the end of October, Chou said.

“It’s a chance to showcase more of what the Valley is, who we are, and what our resources are here that most people don’t know about about — our native jewels,” Delgado said of the sightseeing portion of BBQuest. “You just hear a lot of negative things about being this close to the border. It’s time we show some more about what’s great about living down here.”

Most of the crew of BBQuest were from Austin, and the show enabled them to experience parts of Texas they were less familiar with.

“Through BBQuest, we’ve been able to eat some of the best brisket in the world, and that story is incredible because there is a specific way that Texans cook smoked meat,” Chou said. “And then each area of the state has their own influence and their own flavors that are infused in that to make it their own.”

Chou said that she and the crew enjoyed being in the Valley for the shoot — learning about the landmarks, culture, and variations on barbecue unique to the region.

“It’s really great to come to the Valley and see this culture and the passion that people have for the RGV,” she said. “That’s really been the best thing about BBQuest — it’s learning about the food, but learning about the people who are creating the food because there are a lot of stories to be told through food.” 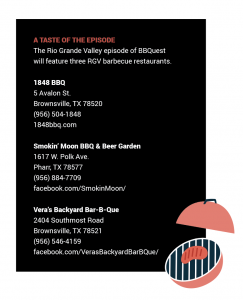 “We want to make sure that if someone watches BBQuest and maybe they can’t get out to the Valley, they can also make those recipes at home and experience this community that food tends to bring people around the table,” Chou said.

From barbacoa Sundays to mesquite and live oak smoke, the RGV episode will imbue BBQuest’s second season with a flavor all its own.

“We’re just so glad to be here. Everybody’s been so welcoming,” Chou said. “Folks here are just so kind and proud of their traditions and of the place that they live, and I can really respect that.”