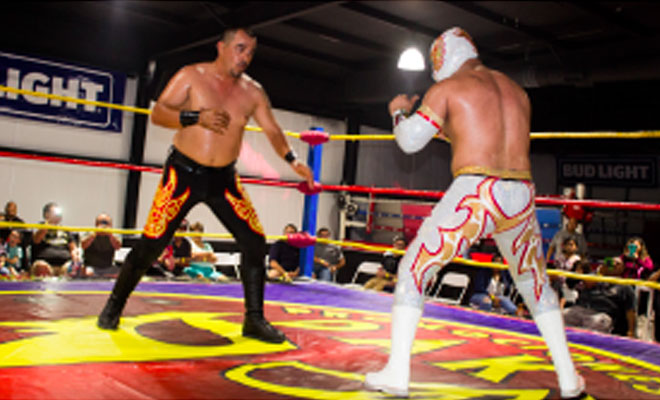 There’s nothing quite like a Saturday night fight at South Texas Fighting Academy. This boxing gym and fight venue in Mission is the place to see one of the Rio Grande Valley’s most raucous and dramatic sporting events: Lucha Libre.

The History of Lucha Libre is intertwined with the history of Mexico, mass media, and entertainment. In Mexico and other Latin American countries, its massive following has made it the most popular sport after soccer as well as an integral part of pop culture and art.

“Lucha Libre is exciting and fantastic entertainment for all Latinos living in the United States,” said Jesus Gabriel Aleman, also known as Dakota. Aleman organizes and runs Lucha Libre via his company, DAK Promociones. “It opens the world of Lucha Libre to so many people and gives families another option for entertainment on a Saturday night.”

Lucha Libre caters to the Latin-American wrestling fans who yearn for something colorful, extravagant and fun for the whole family. This style of wrestling attracts quite a number of sports enthusiasts of all ages here in the Rio Grande Valley.

The history of Lucha Libre goes back 75 years and echoes back to the Mexica (Aztec) people native to modern day Mexico. A popular part of a Mexican wrestler’s persona is his or her máscara, or Lucha Libre mask. The elaborate designs of a luchador’s mask are meant to evoke the power of animals, gods and other ancient heroes. The luchador takes on that identity and the mask is so sacred that to wager and lose one’s mask in a fight is considered a disgrace.

Using the ropes, luchadores catapult themselves through the air and stop their opponents with a combination of punches, kicks, grappling moves, and various submission holds. Women are also fans, especially since female athletes can be pitted against male athletes.

One of DAK Promociones’ regular fighters is Swetty, who has been in the ring for eight years. Becoming a luchadora was an upheaval for her life because, as somebody who considered herself to be shy and reserved, she was not used to performing in front of people and was even less used to the criticisms and trash talk from the crowd.

“Once you have the mask on, you become somebody else and you just enjoy yourself. You’re in front of people and you have to enjoy what the people give you,” said Swetty, who fought her debut match in Monterrey, Mexico. “It’s always been a goal of mine to do Lucha Libre on TV.”

For most fighters, Lucha Libre is a family affair. It started with Swetty’s grandfather, then her uncle El Halcón de Oro, a well-known wrestler. Her mom (La Hija del Sarcey) and her uncle (El Hijo del Sarcey) soon joined the fray.

“The best memory I have is from my grandmother’s house where there is a picture of my grandfather fighting with El Santo,” Swetty said. “It’s amazing to me that years have passed and my uncle, El Halcón de Oro, has a picture with the same pose with El Hijo del Santo.”

El Hijo del Santo is the youngest son of the legendary El Santo, one of the most successful stars in Lucha Libre and a Mexican folk hero who has starred in many Mexican films.

Having already won the loyalty of generations of fans of all ages throughout Latin America, Lucha Libre is conquering the Hispanic majority audiences in the Rio Grande Valley through DAK Promociones and its unique spin on the art of wrestling and larger-than-life personalities of its Lucha Libre stars.

To capture an even larger audience, Aleman brings in well-known wrestlers in the Lucha Libre circuit such as Carístico. Previously known as Místico, Carístico has previously performed in the World Wrestling Federation (WWF) and is currently appearing in the Lucha Libre promotion Consejo Mundial de Lucha Libre (CMLL), where he has been the main storyline hero since 2006 and was at one point the biggest box office draw in all of Mexico.

“Everything I do in the ring I love because the people love it just as much. I’m a wrestler who puts his heart and soul above the ring,” said Carístico before his highly anticipated fight at South Texas Fighting Academy in mid-October. “I want to keep working and fighting to become an idol for the people.”

For Carístico, it’s always been an honor to perform in any fight. In the few years that Carístico has been fighting, he has accomplished what many fighters devote 20 to 30 years to doing. It’s his passion for the fight that puts him above all other fighters and he ultimately hopes to become a legend like many luchadores before him.

“In Mexico, Lucha Libre is where it’s at, that’s where people see the glitz and the glamour,” Aleman said. “It takes a lot of work and devotion to organize these events for the public and for the luchador, you have to be a trained athlete and in superb condition to perform these moves.”

Aleman’s father, a luchador by the name of El Indio, whom he named the championship cup after, would take him to shows every weekend. Much like the children who attend the fights he now organizes, Aleman would jump into the ring in between fights and have a good time.

“I can’t wait for people here in the Rio Grande Valley to check out these luchadores,” he said. “It really is for the whole family.”