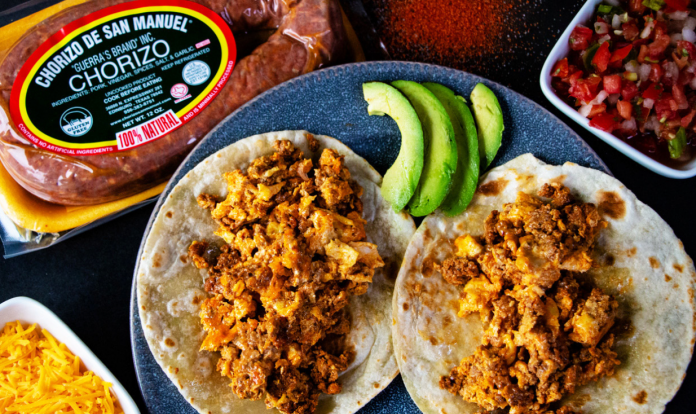 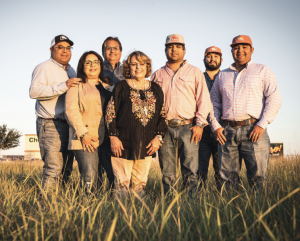 If you’ve lived in a Mexican-American family in the Rio Grande Valley in the last 40 years, there’s a good chance you’ve seen and eaten chorizo with the iconic green label that reads; Chorizo de San Manuel “Guerra’s Brand” Inc.

The Mexican-style sausage made of seasoned pork is a taste of home, a taste of the Valley, and a taste of history. When local residents think of comfort food, there isn’t much more familiar and communal than Chorizo De San Manuel.

The legend of Guerra’s Brand

For decades, dating back to World War II, in the small town of San Manuel, just north of Edinburg, Adolfo “Shorty” Guerra and his brothers opened a small general store.  There Mr. Guerra began to produce the tasty homemade chorizo, which customers could buy by the link or the pound. The general store attracted RGV residents who were either leaving or returning to the Valley, and served happy customers for years.

Eventually, it was time to move on from the business and retire. Guerra made an offer and eventual sale to Luis Flores Jr.

Luis Flores Jr. and his wife Vicky gradually expanded the company to serve the growing and hungry Rio Grande Valley population. Eventually his children joined the family business and expanded it beyond the RGV, now throughout Texas and neighboring states.  In the most recent years their three grandsons have now joined the business.

Once the Flores family took over ownership of the proven successful recipe in 1975, they worked to get the chorizo into local stores, and restaurants.  They eventually became USDA federally inspected giving them more opportunity for growth.

“Ever since I was born, I grew up at [what is now] our older chorizo factory down the road. Now we’re at this building here off of [State Highway] 186 and [U.S.] 281,” Marco Flores said. “I graduated college in 2014 and came back to work for the family. It’s been part of mine and my cousin’s whole life.”

“Guerra’s Brand” became a part of the official name and on the packaging when it was incorporated back in 1976.  Mr. Flores did this in order to pay respect to Adolfo “Shorty” Guerra. The recipe and quality have stayed consistent, and is a 100% natural product which is a big part of the success of the Mexican-style sausage.

Even though the chorizo company comes from a small town, in a relatively small region compared to the rest of Texas, Chorizo De San Manuel makes a big impact on the lives of South Texans.

Looking at a growth chart of the Valley and the chorizo company is like looking at mirror images. The RGV population in 1980 was 600,000, today it is more than 1.3 million. In 1985, Chorizo de San Manuel built its first federal inspected factory in a 4,500 square-foot facility and in 2005 moved into a new 20,000 square-foot space.

Marco Flores states they get kind messages about their food often.

“Every time we go somewhere, and they see our cap or our shirts,” Flores said. “They’re like ‘Man, I really love your chorizo, it’s the best, that’s all we buy.” It’s really nice and humbling to hear people talk well about our product.”

“When people ask me where is San Manuel, and I am explaining to them where it is and then they bring up something like, “Oh where the Chorizo plant is”, and I say yes, that’s it”.  “It’s an awesome and inspiring feeling that people recognize our small community”, Marco stated.  Linn-San Manuel is a tight-knit community, but it’s growing, and we’re happy to be a part of that.” 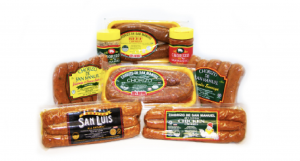 The current factory is hard to miss off the expressway heading north on 281 or driving east to Raymondville on State Highway 186 or west to San Isidro on FM 1017.

The facility has capitulated them into a new stratosphere of production. The iconic chorizo doesn’t just have a Valley-wide reach.

“Our company has grown quite a bit,” Flores said. “The stories I have been told by my grandma, about how my grandpa and his brothers used to sell chorizo to the mom-and pop grocery stores, convenient stores, and restaurants delivering out of an old milk truck.   We eventually worked up to delivering to our local H-E-B’s.  From there, we worked into their (H-E-B’s) warehouse and went from there. Now it’s in Wal-Mart, Sam’s Club, Costco, Kroger, Aldi. We’re even shipping to some Wal-Marts out of state.”

We have shipped product to individual customers across the U.S. from New York to Hawaii, and overseas, Marco stated.

It’s another example of the power of a quality product and the strong desire for food that takes you back to home, back to your childhood, and never disappoints. From local routes on an old milk truck to supplying distributors across the nation, the Flores family has worked hard to build a brand, a reputation, and ultimately a Rio Grande Valley icon.

The Flores family would like to “Thank” all their loyal customers for their support over the years.  They will continue to strive to stay true and authentic to their brand.