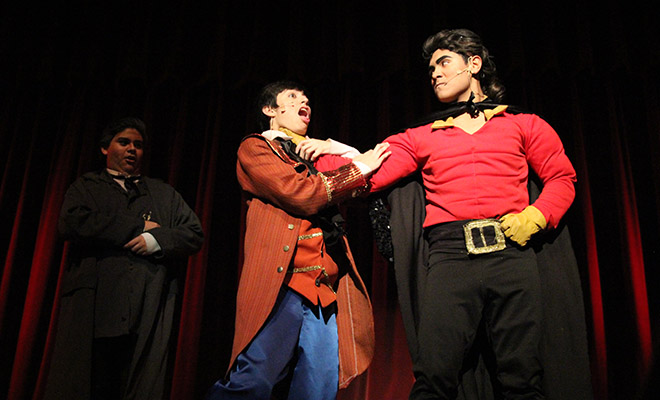 Thirty-six years ago when Gilbert Zepeda started the drama department at Pharr-San Juan-Alamo (PSJA) High School, he had to give tickets away to attract 100 people to see the students’ theatrical performances. It was a program that received little attention from the PSJA students, and even less from the community. But little-by-little, Zepeda started to turn the program around.

“We just made it fun and rewarded the kids by making them feel good,” Zepeda said. “We like to say, ‘We make the magic happen’.”

The magic continues to happen, and a prosperous drama department has been built—one with numerous graduates working professionally in the theater, television, radio and movie industries. It has grown from small audiences of mainly family members to approximately 8,000 students and adults who will watch the PSJA ISD performances of The Wizard of Oz, Beauty and the Beast Jr., Karate Bear and The Little Mermaid Jr. this year. PSJA ISD has placed a priority on supporting drama and the fine arts at all of its middle and high schools.

“It’s an investment in the total child and part of their educational experience,” said Jon Taylor, the PSJA Director of Fine Arts. “We want to support theater by providing the best facilities and the best teachers so that [our students] can pursue their dreams. . . . Kids will always want to do it if the opportunity is presented to them. All kids will want to be in fine arts if they have the opportunity to pursue them and take part in them.”

It hasn’t always been easy in a state that often prioritizes athletics and in a population that isn’t often exposed to or represented in theater. “We know that we are beating the odds,” Zepeda said. “Poor Hispanic students that nobody would think would be doing this, yet at PSJA we are making it happen.”

More than 300 students auditioned for this year’s children show productions in the hopes of being a part of the magic—theater attracts more kids than any other extra-curricular program at PSJA. “At PSJA, theater is as big as football,” Zepeda said. And there’s a good reason for the success and interest in theater.

The PSJA Drama Department has won numerous UIL state, regional and district awards in Theatrical Design and One-Act Play competitions. For the past four years, PSJA has also won the state title in Theatrical Design Group Entry, in addition to individual state, regional and district awards in set design, costuming, marketing and makeup. “There’s not a lot of Hispanics in theater, yet consistently our kids have managed to be at [the state] level year after year,” Zepeda said.

Many PSJA theater students go on to receive college scholarships, and several universities attend the auditions PSJA hosts for its students to pursue theater beyond high school. “Every single kid in our classes are taught how to create their portfolios,” he said. “So all of our kids are college ready. The parents want their kids in our programs because they know it’s a step toward that college goal. . . . The grads come back—especially during the weeks of the plays—and come and talk to our students and there’s a big network of our graduates.”

The graduates are known as “The Legends” and are working in the industry in Los Angeles, New York, Dallas, and studying theater (often on scholarship) as close as Texas A&M Corpus Christi to as far away as London, Moscow and Bali. Both of Zepeda’s daughters have graduated and gone on to work at Radio Disney, and his son is currently a director at FOX Sports in Los Angeles.

The most well-known graduate today is probably Cristela Alonzo, the creator and star of the ABC sitcom Cristela and former contestant on NBC’s Last Comic Standing. Alonzo doesn’t have to look far to find another PSJA-graduate working actor. The real-life husband to her sitcom sister, Maria Canlas-Barrera, is fellow PSJA-graduate David Barrera. Barrera has a long career in Hollywood appearing in numerous television shows including The Bridge, NYPD Blue, The Big Bang Theory and his wife’s previous show, The Wizards of Waverly Place.

Other “Legends” have taken a road that has led them back to PSJA to pass their knowledge on to new PSJA generations. Zepeda’s daughter, Jacqueline, has returned to teach drama at PSJA, and so has Denise Serna who is currently a middle-school drama teacher at Raul Yzaguirre Middle School. After graduating from PSJA High, Serna earned her Bachelor’s degree in Theater Performance and Theater Design at Cedarville University (OH) and a Master’s in Fine Arts in Directing from the University of Essex (England). During her time in London, she got the opportunity to study performance in Bali and Moscow and work with London’s Shaw Theatre on a production of Much Ado About Nothing.

“I paid for my universities with forensics scholarships and drama scholarships,” Serna said. “I can now tell my students that I came from the same poor background as they do . . . and look where I ended up and where it has taken me. Look at what I was able to do because I auditioned for a play.”

Serna never anticipated returning to PSJA to teach drama, but she never lost touch with the administrators who had helped shape her youth. While studying in Moscow, she learned that her former middle school did not have a drama teacher and the school’s program was suffering due to a lack of direction. “It broke my heart,” Serna said. “ I look back and if I had not joined that forensics team, where would I be? . . . I’m so lucky to be assisting in the department that impacted my life. It’s the most welcoming place there is.”

Serna fondly remembers the PSJA High School drama department as the one place where everyone—the football player, the ROTC cadet, the cheerleader, the actor, and the scholar—all got along. “I definitely would not have grown into the woman I am today without (PSJA theater). I learned to laugh there, I learned to cry there, and it was always in a supportive atmosphere,” she said. “Regardless of how different you are, we’re still experiencing the same thing. It was integral to the development of my world view.”

At the center of PSJA theater is Zepeda. His focus has always been on the students, and how drama can shape them for success in the classroom and society. “We tell the students to go out and beat the odds. They’re changing the environment and changing the atmosphere,” Zepeda said. “What we are doing is a stepping stone to college. . . . We teach them a lot about being Hispanic and their roots, and when they’re performing they know they are representing their community.”

In 1999, Zepeda was awarded the Disney American Teaching Award for High School Arts. His association with Disney has opened many doors for the PSJA Drama Department and its students. One of which was receiving the rights to write and perform the first Spanish-English production of Aladdin Jr., which today the Disney Company allows other theater departments to perform around the world. Disney also granted PSJA the opportunity to perform the first run of Little Mermaid Jr., as its pilot production.

PSJA’s focus on the students reaching life-long goals using fine arts plays a large role in its success. “With budget cuts and high-stakes testing, it’s easy to say fine arts is not what we should be focusing on,” Taylor said. “But here it’s part of the puzzle. It’s all for the kids and to help them pursue their dreams.”

The man who started as the lone voice of theater in PSJA is now surrounded by a faculty of drama teachers at both the high-school and middle-school levels, a supportive administration, and numerous students who have been able to finance their college education through theater scholarships. “It makes you really proud,” Zepeda said. “It makes it worth being a teacher, and I’ve been lucky. It’s been a wonderful life.”