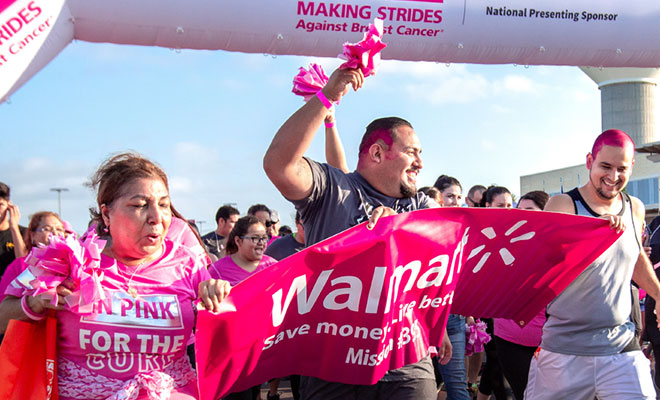 Zasha Amar needed to get to MD Anderson Cancer Center in Houston for an appointment to schedule chemotherapy for breast cancer. But the same-day, round-trip flight was exorbitant.

“It’s something that I would not have normally been able to do,” Amar said. “I would’ve had to start chemo really late if I had not been able to get to that appointment.”

She was able to access help for the flight via the American Cancer Society, which has programs in place to assist cancer patients with transportation to their appointments, among other initiatives.

Amar spoke about her experience with breast cancer at a fundraising event for the organization — the American Cancer Society Making Strides Against Breast Cancer walk, held Oct. 13 at the Mission Event Center.

“I think it’s awesome,” Amar said. “April [Chapa] really did a great job. The entire American Cancer Society in the Valley did an amazing job. It’s just been amazing how much they do for everybody.”

Chapa, senior community development manager for the American Cancer Society, helmed the fundraising walk, which included giveaways, music, vendors, and even a giant pink inflatable chair for photos. Nearly everyone wore some form of pink — T-shirts, tutus, flower crowns, wigs, and more. For those who wanted to go all out, booths offered pink hair-dye spray. One boy rode a red bicycle festooned with pink curling ribbon on the handlebars, ringing a bell as he wove around participants. 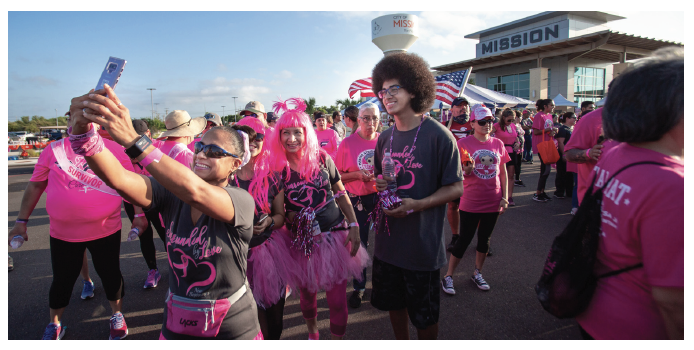 “This is our first Making Strides — I’m saying this is our inaugural event because we’re going to be having this every year,” Chapa said to the crowd of 720 participants amid kickoff festivities. “So next year it’s going to be even bigger and better.”

Since 1993, similar Making Strides events across the country have raised more than $870 million. Organizers for Mission’s event expected to hit their goal of $50,000.

“Our Making Strides Against Breast Cancer walk helps the American Cancer Society fund groundbreaking research into causes, prevention, and treatments for breast cancer, provide free rides to chemo and places to stay near hospitals, a live 24/7 cancer helpline, and so much more,” Chapa said in a news release.

Patients like Amar are able to take advantage of those services — and to pay it forward.

Amar was one of three Portraits of Hope honorees for the event.

“I thought it was amazing,” she said of receiving word that she would be honored. “I did cry when April called because it was not something that I had even really thought about. It was just kind of like … I had to push through.”

Amar knew she had to stay strong throughout over the course of her treatment for her daughter — Riley Grace, 3, who had pink hair to mark the occasion.

“It was really exciting to know that other people saw me as hope where I was looking to them for hope,” Amar said. “I guess we don’t really realize the things that we go through or that we push through until somebody else tells you, ‘hey, you’re doing a really good job.’ I think that was the hard part, hearing, ‘you’re doing a great job,’ because it was hard. It was really hard.”

Amar finished therapy Sept. 4, and returns to Houston for the all-clear in November. She’s back at work at McAllen Memorial High School full time, and says she feels good. 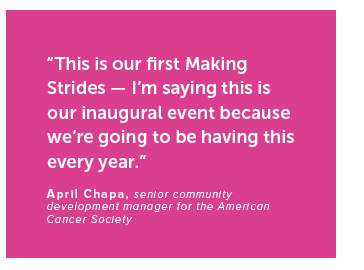 “She keeps me on my toes,” Amar said as Riley pointed out everything in the immediate vicinity that was her favorite color: pink. “She was the reason I woke up every day.”

The two other Portrait of Hope honorees, Patricia Almendarez and Naomi Sanchez, spoke alongside Amar onstage during the kickoff speeches.

Almendarez was accompanied by a large group of supporters who formed Team Pat.

“I am an 8-year cancer survivor,” Sanchez said when it was her turn at the microphone. “I just wanted to thank everyone for being here, for all your donations. They do count.”

When it was Amar’s turn to speak, she reminded everyone that they didn’t have to quit raising money after the event.

“Just because we’re here at the fundraiser and this is the walk, it’s not the time to stop donating,” Amar said. “Continue to donate. Every dollar counts every day of the year.”

Learn more about the American Cancer Society — including how to donate — at cancer.org.