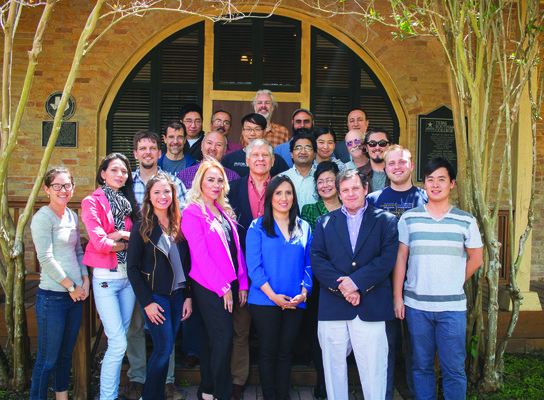 The event took all of 0.02 seconds and opened a new chapter in the study of the universe.

After traveling 1.3 billion light years, the brief impulse detected by earthbound scientists confirmed the existence of ripples in the fabric of space-time called gravitational waves.

First predicted by Albert Einstein in 1916 based on his general theory of relativity, gravitational waves are curves in the shape of space-time that propagate and carry information about the nature of gravity. Physicists have concluded that the detected gravitational wave was produced during the final fraction of a second of the merger of two black holes to produce a single, more massive spinning black hole.

The discovery that has opened a new window to study the mysteries of the universe is the product of years of research involving some 1,000 scientists at 80 institutions in 15 countries  –  including the University of Texas Rio Grande Valley, the home of what has developed into one of the nation’s top university physics programs.

A centerpiece of that program is the Center for Gravitational Wave Astronomy on the Brownsville campus, the biggest such research center in Texas and among the largest in the United States. High-profile universities like the Massachusetts Institute of Technology, Caltech and Columbia University are part of the network of institutions that played a role in the gravitational wave detection research.

UTRGV physics department faculty members have dedicated almost two decades of their research lives to search for these waves, according to Dr. Soma Mukherjee, physics professor and interim department chair.

The gravitational wave researchers in Brownsville are part of a global network of physicists, many of whom have crossed paths professionally while working on gravitational wave astronomy at different universities and research centers.

The UTRGV group today is made up of about a dozen faculty members along with more than 25 undergraduate and graduate students and post-doctoral fellows.

The detection occurred at 5:51 a.m. Eastern Standard Time on Sept. 14, 2015, by the Laser Interferometer Gravitational-wave Observatory (LIGO), with twin detectors in Livingston, Louisiana, and Hanford, Washington.

Scientists immediately started to analyze the data to validate and confirm the detection as a gravitational wave. In February the National Science Foundation, which has funded the research work to the tune of $1 billion, announced the findings.

Mukherjee brings an impressive depth of experience to the gravitational wave research at UTRGV. She has been a member of the LIGO Scientific Collaboration since its inception in 1998.

She collaborated with other scientists to achieve “first-in-the-field” contributions in detector noise analysis and search for gravitational wave signals from supernovae.

“Supernovae are rare astronomical events that occur during the last stage of a massive star’s life, marked by dramatic and catastrophic destruction explosion,” Mukherjee wrote in a recent article.

“The gravitation group at UTRGV is a multi-faceted unit,” she wrote. “It has grown in a wholesome and well-grounded way to cover all aspects of a giant team effort. The group members can proudly boast of having made important fundamental contributions to the discovery.”

According to Mukherjee, the South Texas research group is made up of people with experimental expertise who have worked at the detector sites. Others have been analyzing LIGO data since the turn of the century, and a team effort is under way to follow up on gravitational wave candidates using optical telescopes.

And the Brownsville connection not only did work leading up to the discovery, but participated in the immediate follow-up to confirm the data.

Dr. Mario Diaz, CGWA director and professor, along with other UTRGV professors, a post-doctoral fellow and a doctoral student, operated optical telescopes in the southern hemisphere in the hours after the event to look for possible visible counterparts in the sky.

“The group from the CGWA was one of only 20 groups of astronomers throughout the world who performed this follow-up,” according to Mukherjee.

The algorithm behind the gravitational wave detection is based on work done by UTRGV professors Dr. Soumya Mohanty and Dr. Malik Rakhmanov in collaboration with professors from the University of Florida.

Some years earlier, University of Texas at Brownsville graduate student William Johnson, working under the supervision of Mohanty, began to lay the ground work for the algorithm in his master’s thesis.

“It’s the first working method that allows you to study the universe not using the electromagnetic radiation spectrum,” Rakhmanov said about the use of interferometer technology.

In its simplest form, an interferometer is an optical device capable of making accurate measurements of wavelength, wave velocity and distance.

Rakhmanov is intimately familiar with the detectors, since he spent years at the LIGO sites installing hardware and commissioning the detectors.

The twin stations in Louisiana and Washington pass laser light back and forth between mirrors along perpendicular 4-kilometer arms.

As described in a Scientific American article about the September detection, “An incoming wave would slightly warp these arms so that one became longer or shorter than the other by only a few thousandths the radius of a single proton, altering the flight time of the light and triggering a detection.”

The signal that was detected is actually energy radiated from the gravitational wave as it moves through the universe, said physics professor Dr. Volker Quetschke.

He said scientists had little doubt that gravitational waves existed, but the success of the LIGO experiment not only confirms the theory, but also launches a new era of discovery.

“We are going from detection to observation,” Quetschke said. “It’s a new tool for observation in space. “We know it works. We just need to make it better. We are bringing technology forward.”

During the years of work leading up to the gravitational wave detection, researchers at UTRGV and other universities have made significant advances in the optics, lasers and other equipment deployed in the cosmic search.

Headquartered on campus in Cavalry Hall, a building that dates back to the late 1800s as part of the old Fort Brown Army outpost, the CGWA is poised on the verge of a new frontier of exploration of the cosmos. A short walk from the administrative offices is a state-of-the-art laboratory where researchers work to improve the optics that are so critical in gravitational wave detection.

Rakhmanov started the interferometric research lab when he came to Brownsville in 2008, working closely with his colleague Quetschke.

“This is as good of a lab as just about any university,” Rakhmanov said. “In fact, we have people coming here from other universities to do work.”

Still in its infancy, the research and its possibilities for discovery are enormous. And they will take time.

Holding up his cellphone, Rakhmanov noted that the technology behind the ubiquitous communication device has been around for a long time, with the first crude wireless phone dating back to the early 1900s.

“The technology behind the cellphone took about 100 years to perfect,” he said. “We are still in the beginning of this new technology. It shows how preliminary this whole state of science is.”

And that’s where the excitement comes in for experienced scientists and students starting to explore the world of physics.

Over the last 15 years, the UTRGV physics department has landed some $35 million in federal grants to support the research efforts. Its role in the LIGO discovery will only add to the university’s prestige, allowing it to gain more funding and attract top-notch faculty and students.

Two of the newest physics faculty members arrived in Brownsville from the University of California at Berkeley and Columbia University.

Rakhmanov said a recent faculty addition was chosen from a field of 126 candidates.

All this means an environment where students can do more than study; they become immersed in the actual research work.

“Our students don’t work on textbook material,” Quetschke said. “They work on the cutting edge of experimental physics.”

The impact of UTRGV’s role in the gravitational wave detection also sends a message to the Rio Grande Valley as to the importance of the new university on education in South Texas.

“This can change the way that people think about education in the Valley,” Rakhmanov said.

He noted that many Valley students aspiring to advanced education in science and other fields historically have felt that they needed to go elsewhere to pursue their dreams.

“The Valley is somewhat different when it comes to education,” he said. “I realized that the local population views education differently. There’s a lot of vocational, practical, technical stuff.”

Rakhmanov said he believes an important role of UTRGV is to “change the way that people think about education in the Valley.”

Using his intellectual passion as an example, he said a bachelor’s degree in physics “is nothing. You have to have a PhD. And you can do that here.”

But he stressed that the same thinking applies to other fields as well.

“This is a modern university,” he said. “We are doing exciting work here.”