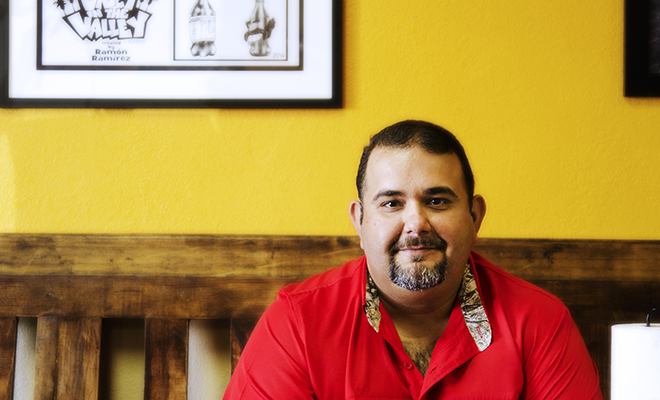 “This beautiful ribeye burger – you see the toasted bun holding just enough of that beautiful ribeye, topped with ham and two cheeses.  You can smell the mushrooms and jalapenos mixing together underneath that nice bacon and topped off with a little bit of avocado.”  These are the words that Shane McAuliffe, host of the Texas Bucket List TV Show, used to describe the “Best Burger in Texas.”

The show’s host visited dozens of burger joints around Texas on the quest to find the tastiest burger in the state.  The original Marco’s burger definitely caught his eye.  What makes this burger so unique is that it’s made by grinding ribeye steaks rather than using ground meat.  The toppings, secret ingredients, and perfect grilling make it quite a culinary experience.  Luckily, this jewel can be found right here in the Rio Grande Valley – at Marco’s Burgers and Fries in Mission.

Marco’s Burgers and Fries has been serving the Rio Grande Valley for over three years.  The restaurant’s owner, Marco Suarez, had been part of the restaurant business for over 25 years before he decided to open up this popular burger joint.

“My family has always been in the restaurant business, so my wife and I wanted to start our own venture.  We thought about doing burgers in an area that needed it, and we chose Mission,” says Suarez.  The restaurant was an instant success, attracting families, high school students, young professionals, and winter Texans from the area.  Suarez attributes its early success to his family’s strong presence in the area.  His family’s restaurant, Koko’s Uptown Cafe, and their clothing store, Albert’s Formal Wear, have both been a strong presence in the McAllen and Mission area for over twenty years.

The Suarez couple was already operating a successful business when they were unexpectedly met by even more success in October of 2013.  The popular television show, Texas Bucket List, decided to air an episode featuring Marco’s Burgers and Fries as part of their quest for the best burger in Texas.  The first episode was to air at 6 a.m. in the morning.  Marco and his wife didn’t expect that it would attract many customers because of how early in the morning the show would be airing.  Much to their surprise, it turned out that hundreds of people did watch the episode.  They ended up selling over 600 burgers on the day that it first aired.

“We had people from Corpus, Raymondville, and all over Texas.  It was pretty crazy!” says Suarez about that fateful day.  In December, the program’s host, Shane McAuliffe, came back to award the eponymous Marco’s burger as the “Best Burger in Texas.”  After receiving that award, the restaurant started having customers visiting from all over the state.