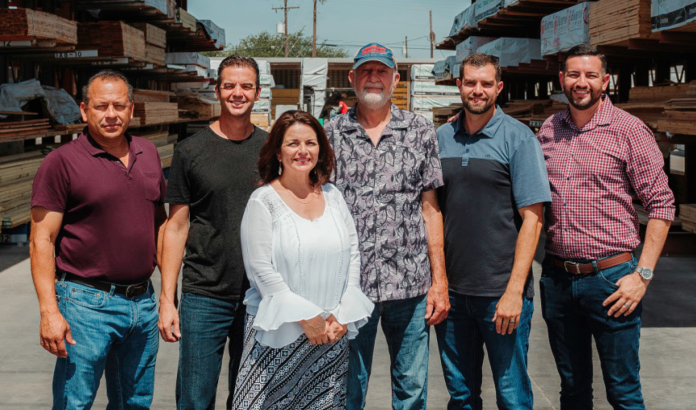 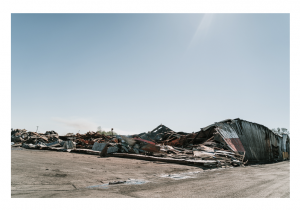 It’s been more than six months since the original Matt’s Building Materials in Pharr burned to the ground in a devastating New Year’s Day fire.

Firefighters from more than a dozen agencies battled the blaze for more than 12 hours but were unable to save the iconic structure. Hours later, piles of smoldering rubble and ash lay scattered where the historic family business had once stood.

“My dad worked there for more than 50 years, and I grew up in this business,” said co-owner Isaac Smith. “It was part of life for me, my brothers, and sister. I worked there through junior high, high school and college, and so did my siblings. It was just part of who we were as a family.” 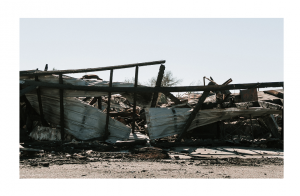 The store opened in 1967 and was originally called Valley Cash & Carry Building Materials. The store, which had stood for more than 50 years, wasn’t equipped with the modern fire suppression technology that is common in newer retailers.

In the days that followed, many of the employees at the Pharr location relocated to Matt’s locations in San Benito and Palmview while the Smith family got to work planning to rebuild the Pharr store. 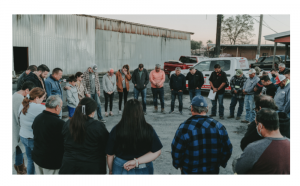 “There’s obviously a lot that has to get done when you are talking about a project this size,” Smith said. “These types of projects usually take years to plan. But, obviously, time is of the essence and we need to get this done quickly.”

There remain obstacles to be overcome. There are numerous meetings with architects and designers, along with the soil testing and surveying work engineers are doing to ensure there aren’t issues before the foundation for the new store is poured this fall.

Smith said they are waiting on engineering reports so they can present final plans to the city and get the green light to start building.

“We’ve already met with the city several times to make sure this gets done as quickly as possible,” Smith said. “We’ve had some really productive meetings, and as far as the red tape goes, we’re really fortunate they are working with us.

“There are programs that are set up for new businesses, and they are going to treat us like a new business.” 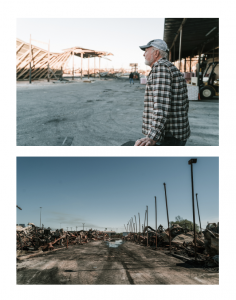 Smith said city leaders, including Mayor Dr. Ambrosio Hernandez and members of the city commission and the Pharr Economic Development Corporation have even agreed to participate in some of the off-site costs, such as landscaping.

“We’ve been very fortunate to have a tremendous amount of support from the EDC and the programs they have to offer,” Smith said. “They could have easily said no, but they know our business means a lot to the city.”

While city leaders are firmly behind the return of Matt’s Building Materials, there is nothing anyone can do to alleviate the high costs and scarcity of lumber and building materials.

Smith said they were able to order some of the materials several weeks after the fire that they knew they would need to rebuild. That’s when they learned the materials were backlogged a year and wouldn’t be delivered until January 2023.

They have had to source providers locally to keep the project on track.

“This is a little out of our realm,” he said. “We sell lumber and building materials. We aren’t general contractors by trade.” 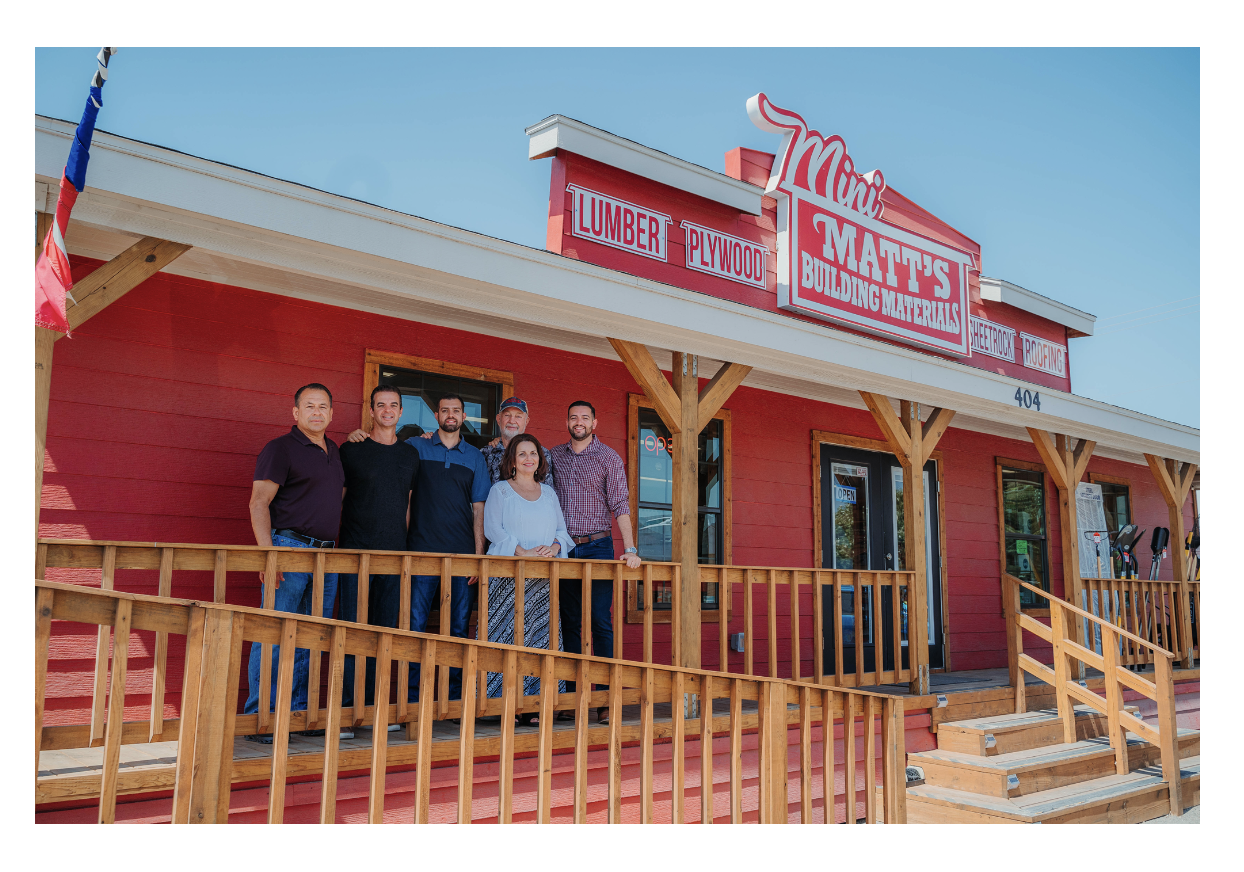 To do this, Smith said they’ve relied on a lot of planning to ensure the materials arrive, and input from local general contractors and loyal customers with a construction background. This type of source has helped them find and hire subcontractors and locate some of those hard-to-find materials. 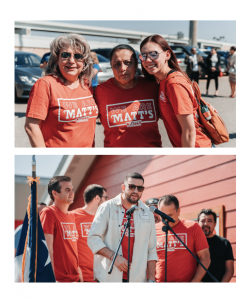 “We’ve been kind of preparing, planning and placing orders that we need to place on items that are hard to get and hard to come by,” he said. “We are just having to plan, which means we have to be on our toes, be aware of product delays and be better at what we do.”

Although there is not an official timeline, Smith said they are shooting for an official groundbreaking around Labor Day. That target date hinges on how long the engineering process takes, and how long it takes to receive those reports so Smith can make his final presentation to the Pharr City Commission.

So what can customers expect?

Smith said the new 55,000-square-foot store location will be about the same size as before, but with higher ceilings that will allow for more products to be stocked vertically, and make it feel a bit more open.

“We are going to be a lot more efficient with the space we have,” he said. “We had so much wasted space before, and we always talked about how we could make the space more efficient.

“Aside from closing down and gutting the store, there really wasn’t a feasible option. Now, we have that option to be more efficient.” 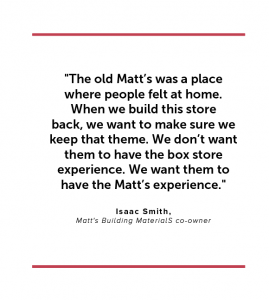 The newest Matt’s will also be the anchor store inside a strip center they plan to use to lease space to other retailers.

“People will think we built a bigger store,” he said. “It’s not going to look that way on paper, but it’s going to feel that way. A lot of people are excited.

“I don’t know how many people have told me they are anxious to see us back up and running. There’s a lot of anticipation.”

Smith said the ordeal of the fire and the rebuilding process has been a humbling experience for everyone involved in the business. It also enhanced the company’s “community first” philosophy of treating everyone with respect and building relationships that helped make Matt’s Building Materials the local go-to for DIY projects. 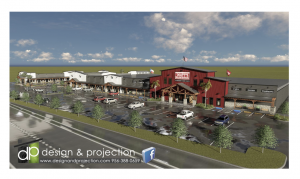 Smith said he wants loyal customers to know that nothing has changed and that they can expect the same level of service and that same “homey feeling” they always felt when they walked through the door.