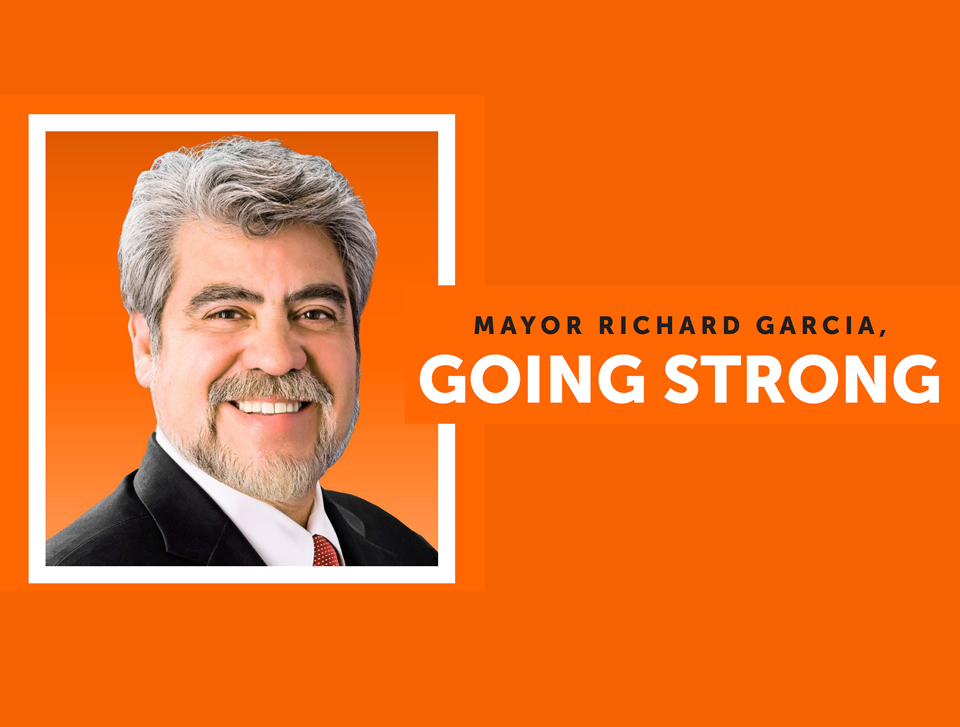 Mayor Richard Garcia is seeking re-election for his fourth term. At 70 years old, he doesn’t look his age. He is as disciplined about his workout routine as he is about implementing his vision of economic growth and quality city services in Edinburg. County Judge Ramon Garcia once compared him to Sen. Lloyd Bentsen and Judge Ramiro Guerra.
“It’s better to be lucky than good, but you have to be proactive,” Mayor Garcia said.
Edinburg has seen tremendous growth and now has a population nearly equal to McAllen. During his first term, Mayor Garcia addressed what he called “the basics.” Under his leadership, Edinburg built new city facilities and improved city services, updating them from the 1950s without an increase in taxes. He focused on job creation in three major sectors: small businesses, primarily fast food and retail; industry, such as Santana Textiles; and the healthcare sector, with Doctors Hospital at Renaissance, which employs over 4,000 people, and United Healthcare System, which includes Driscoll Children’s Hospital. Now Edinburg leads Hidalgo County in job creation. Additionally, these businesses contribute to Edinburg through property taxes, adding to the city’s general fund.
Further growth required an innovative approach that would not increase taxes and would serve to restructure city debt. The mayor asked his team to research solutions. Former city manager Ramiro Garza found a solution in San Antonio. San Antonio revitalized their city without increasing taxes through a Tax Increment Reinvestment Zone (TIRZ).
A tax increment reinvestment zone (TIRZ) is a political subdivision of a municipality or county in the state of Texas created to implement tax increment financing. They may be initiated by the city or county or by petition of owners whose total holdings in the zone consist of a majority of the appraised property value. 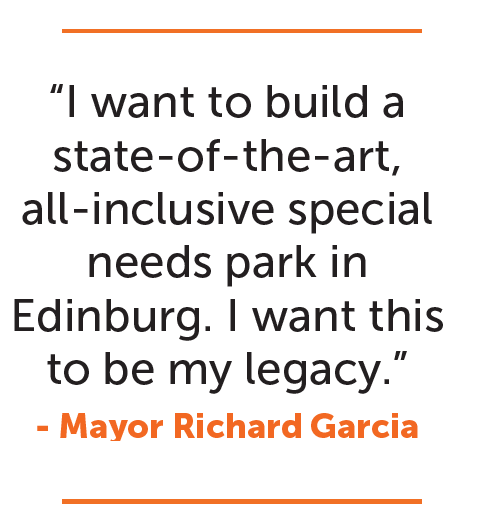 Edinburg has four TIRZs and is working on its fifth. None of the investment comes from the city’s general fund. Examples of the TIRZ include The Shoppes at Rio Grande Valley and the new RGV Vipers Arena, which is under construction. It will pay back the city $89 million precisely because it is structured as a TIRZ. Part of the new courthouse will be paid for as a TIRZ without an increase in taxes. Other Rio Grande Valley cities are now emulating Edinburg by utilizing TIRZs for city projects.
“I am always willing to learn and not re-invent the wheel,” Mayor Garcia said.
Public-private partnerships are a practical solution for parking problems and public transportation needs. The mayor reports that public-private partnerships are being discussed with a cab group out of Dallas/Austin and an expansion of the Valley Metro system. The pedestrian mall from the courthouse to the city hall and on to the university will become a place of commerce for street vendors inspired by Las Ramblas in Spain.
Not re-inventing the wheel includes studying what other university towns with county seats are doing. Under the mayor’s direction, consultants were hired to draft a master plan for downtown Edinburg. The concept of public-private partnerships will facilitate the revitalization of downtown. The bottom of the storefronts downtown will be retail and the upper portions will be residential. The revitalization will include stage music in the square and other arts kiosks.
“Edinburg is the best it’s ever been,” Mayor Garcia said.
The mayor is proud that Edinburg won a budget award with the status of exemplary. Edinburg’s credit rating was upgraded in part because of its use of TIRZs, which keep the tax rates from increasing.
Edinburg was one of the first Valley cities to embrace and contribute to the medical school. The mayor was quite vocal with his support.
“We are following San Antonio’s example,” he said. “As a result of their medical school investment, San Antonio’s growth rate became the second largest in Texas and seventh in the United States.”
“Edinburg is about family and I am about family!” Mayor Garcia added.

The mayor has a special needs adult daughter. He is keenly aware of the vast needs of families of children with disabilities. He is even more aware of the lack of services available to these families.

“We may not see all the estimated 80,000 special needs children in the Valley; they do not have a whole lot of places to go. We are going to change that!” With a big smile on his face, he shared the joy his own family has received from volunteering. “My wife and I have been invited to volunteer with Capable Kids, a nonprofit for special needs children and their families.” They provide services, events, and advocacy for children with disabilities. At the baseball games the organization hosts, the mayor and his wife pushes players’ wheelchairs around the bases of the diamond.

“I want a fourth term in no small part to bring these children and families out of the shadows,” Mayor Garcia said. “I want to build a state-of-the-art, all-inclusive special needs park in Edinburg. I want this to be my legacy.”