McAllen ISD trustees and school administrators say they are at a crossroads when it comes to improving school facilities in the district. 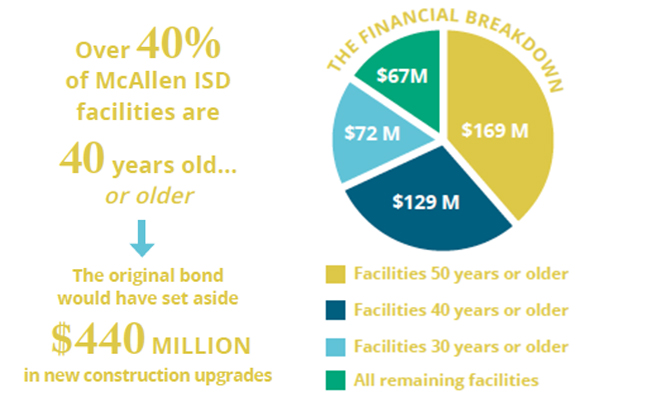 Considering that a significant number of schools are over 40 years old, and an even greater number are over 20 years old, volunteers say they have concluded more than 18 months of work in which they were tasked to identify the needs of the district, and then prioritize those needs among 46 facilities.

At their regular school board meeting on Feb 23, the McAllen ISD Board of Trustees approved a reduced bond election scheduled for May 9. The amount on the ballot will be $297 million, with about one-third reallocated from the $440 million proposed.

Property tax implications of the $297 million bond issue, which may be sold in up to three packages based on market condititions may result in a 17 cent per $100 valuation tax increase by 2020.

Administrators say projects funded through the $297 million bond should be complete by 2023.

“We couldn’t just fix what was broken,” said Gina Millin, who is co-chair of the district’s Facilities Forecast Advisory Committee, the entity that was charged with identifying the needs of schools in the district over an 18 month period.  “Once you start doing that, then you have to become compliant. We knew that option in the $200 million range was not going to cut it. Plus, we just didn’t want to return McHi to the way it looked in 1962. We wanted to incorporate 21st century teaching styles into that facility and others across the district.”

In one instance, volunteers say they looked at the lowest option, which was just fixing what was broken at the schools, and returning them to the condition they were in when they opened. The cost amounted to nearly $200 million, according to the FFAC.

The problem with that option, according to Millin, is that when you have old schools, you don’t have an ADA compliant basis. When you start to remodel them, then you’re no longer grandfathered in, so you have to expand doorways, along with a whole range of other projects, Millin said.

Then the group started exploring the option of “tearing down and building new.”

The question posed was ‘what if we took every building that was over 40 years of age, and we just demolished it and rebuilt it?’, Millin said. When the numbers were calculated, the estimated cost to do that was in the $700 million range, which was not reasonable.

The FFAC consists of 165 volunteers from all areas of the district. The group says it has spent countless hours over the last 18 months reviewing all data to make a well reasoned recommendation to the MISD Board of Trustees regarding the proposed bond.

“The idea was like the McAllen Public Library. You can’t tell it was once a Wal-Mart. That’s the kind of transformation we are talking about, where you keep the bones but you go in and gut certain spaces and truly transform,” Millin said. “When we did that, we ended up in the $400 million range, and then we kept going back and looking at numbers. We brought in local builders and looked at their numbers and compared them to our numbers to make sure we were right on target when we considered we wouldn’t start building for another two to three years. That’s how we verified that the numbers we were recommending were good numbers.”

According to the FFAC, it is imperative to make the investment now for a variety of reasons. School district buildings will get worse over time, and will become more expensive to renovate. Also, the district will save millions in interest by locking in at today’s current low rates.

“The numbers we are talking about are not unprecedented,” Millin said. “They are not numbers that we have never dealt with before, and then the other thing is you get what you pay for. Even at the highest projected level, PSJA and Hidalgo will still be higher than McAllen residents. Look at the facilities that PSJA offers. They are paying higher taxes, but they have much better facilities. We are paying lower taxes, but our facilities are horribly outdated and in need of significant renovations.

“There are some people who cannot see past the front door. For those people who are going to be moving to the Valley because of industry that is coming like Space-X or UT-RGV, these are professionals who want to see modern facilities,” Millin said.

At a school board meeting on Feb 29,the administration said it was working to develop a solution that continues to ahdere to the FFAC’s principles, while addressing the needs identified through the committee’s extensive review.

Trustees say they have utilized a funding combination that establishes the mechanism for “systemic long-range planning” for maintenance and staff compensation.

The mechanism will allow taxes to be increased in gradual increments rather than one lump sum, according to a district statement. It cuts approximately one-third of the indebtedness that would have come from the original $440 million.

A proposed increase in taxes drew the ire of citizen groups who say they are watching the events closely.

“How much more of a burden can they put on the taxpayers,” said Objective Watchers of the Legal System (OWLS) member Fern McClaugherty who was present at the Board meeting on Feb. 29. “I’m hoping that the people of McAllen will vote ‘no’.”

At issue, according to the OWLS, are the cumulative effects of two bonds recently passed in Hidalgo County.

Voters approved a bond referendum on Nov. 6, 2012 in favor of the drainage board of directors issuing $184 million to upgrade the county drainage system; which added an additional $25 in taxes annually per $100,000 property valuation.

Voters also narrowly approved a $159 million bond issuance in 2013 to South Texas College in order to fund new buildings and operations. That bond was passed as a result of the ballot in Starr County. Taxpayers in Hidalgo County rejected the proposal, which amounts to an additional $35 annually per $100,000 property valuation.

“The taxpayers can’t afford it. There are just so many taxes. You have the county drainage that is taxing your property, STC is tacking on another one. Then we have the county, which is at 59 cents,” McClaugherty said, referencing Hidalgo County’s tax rate, which ranks among the highest in the state

“Look at Chicago or New York, those buildings they are using are more than 100 years old,” McClaugherty said. “The primary function of a school is to educate.  If they want to spend money, hire some good teachers and pay them well.”

Among other scenarios originally proposed by the district included selling the $440 million at three different intervals; $169 million in 2015, $142 million in 2017, and $129 million in 2019, avoiding a big tax hike, according to MISD superintendent Dr. James Ponce.

“The more money you throw at something like this won’t affect the quality of education for the children. They were saying that these wonderful new buildings were going to help their education, but it’s not the buildings that do it. It’s the families and teachers,” McClaugherty added. “What happens if families can’t afford their homes? Kids would like a roof over their head or something on the table at night. How many of these kids are going home hungry? They may get fed at school, but that may be the only meal they have. These people are hanging on to their tiny homes, and they are going to lose it when each one of these entities raise the value of their properties.”

Members of the McAllen Tea Party also voiced their concerns. 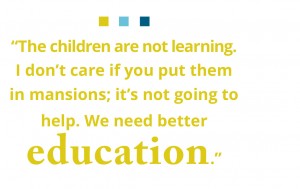 “They increase the property values, so people have to work harder. That means they have less time with their kids, and they delegate the responsibility of educating to the school district, and then the district bitches about the fact that they have no home life. You are creating poor people by doing this,” said Richard Montesdeoca, who is a member of the McAllen/Hidalgo County Tea Party and member of the OWLS. “This means people have to make one of two choices. They can work harder, or they can move to San Juan. The school district doesn’t seem to realize that. They are giving us the old standby saying ‘it’s better’, but it would be better if our population wasn’t poor.”